We go in depth the run game and look at how Borges will utilize the U-Back to manipulate the defense and run what he wants to run.

Share All sharing options for: Inside the Playbook Runs What it Wants in the Run Game With the Help of the U-back

Introduction
Last time we set off on a primer for how the use of FBs, TEs, and the hybrid between the two: the U-back, can work in the run game. Today we are going to dive a bit further into that. We'll look predominately at 3 different formations: 11 personnel Ace Formation with a single back, Y-TE, and a slot receiver; 12 personnel with a single back and a U-back off the LOS but in a closed position (read: off the OT); and 21 personnel with an offset FB to strength (read: to the Y-TE).

Get Past the Obvious
First I'm going to present the 12 personnel and two other formations, essentially to show the versatility of the U-back position. 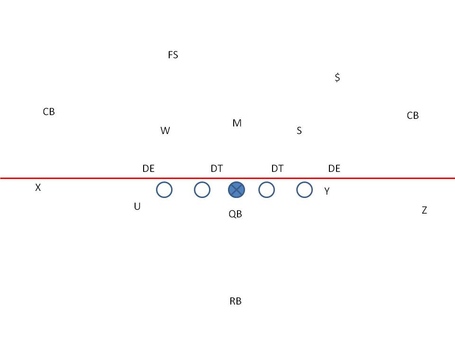 Now imagine moving him up a yard and moving the who was the X-WR back off the LOS. 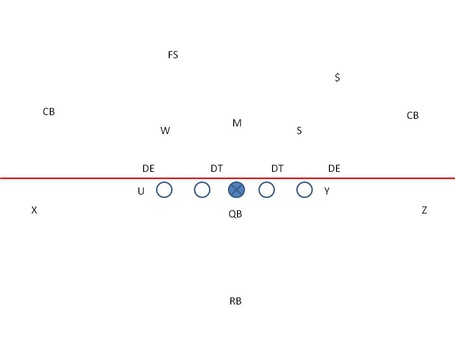 Now, not all the run plays are the same from the first formation to this, you no longer have a lead blocker from the U-back, but a lot of the same run plays can be utilized, as well as the same pass plays, as you can likely envision.

Now move that U-back back a couple yards and inside the OT, he's essentially a FB. 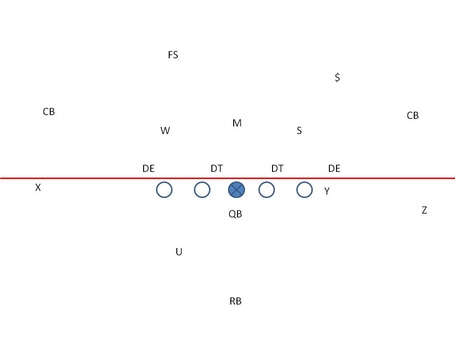 This formation has much of the same run capability, and also gives the U-back to opportunity to run, but the U-back is in a fairly different position as far as starting routes.

So by only slightly changing the formation, you add some strength but are also hindered in some areas. At the end of the day though, you have a lot of the same capabilities with the flexibility from a single position.

Power
This will be shorter on words and I'll attempt to explain the differences, as the images will explain the similarities.

Power is typically best with a FB in the backfield to kick out the DE. A two back set is typical to run power. But let's say you want to threaten the backside edge a little more. Maybe you see something in the defense that will let you run Power O and that B/C gap more effectively when you utilize two TEs. And maybe the defense has a weakness in the flats with quick outs (say a team that runs a lot of cover 4) so you want to be better prepared to attack that in the pass game. So you put the U-back at an offline-TE position. 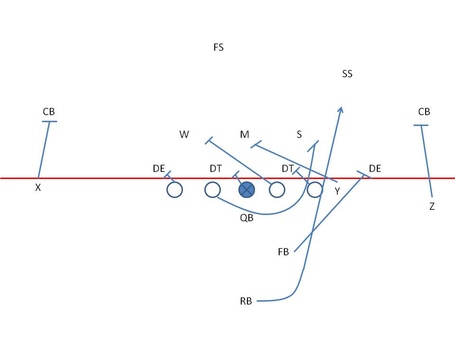 Note, the U-back will likely cheat a little inside presnap. Rather than his inside foot being on the outside of the backside OT's outside heal, maybe his foot will split the backside OT. The RB, for his part, needs to adjust his footwork. When many people hear about footwork, they think it's merely something to increase accuracy or agility, something personal to that player, but perhaps just as important is how footwork brings together timing. Here, a 45 degree counter step gives the U-back more time to cross the formation to get to the playside DE. It also makes it so the back will receive the ball a little further up field so he's in a better position to actually follow his the U-back rather than exposing himself to a straight shot from the playside DE. The rest of the O-line isn't changing much. 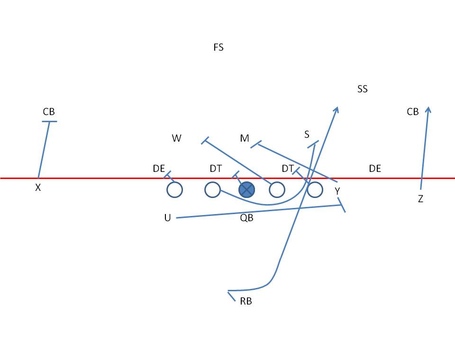 Now let's say you see something in their nickel package you would like to attack. Maybe they aren't as good in the run game when spread out, or maybe one of their adjustments to a slot receiver puts their LBs in a bad position to defend the run. Well, a lot stays the same, only now the Y-TE will kick out the playside DE. The rest is pretty much unchanged. 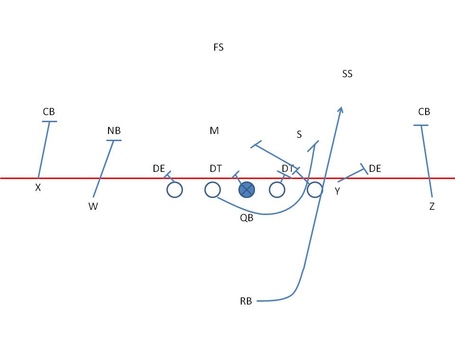 Inside Zone
I said last time that zone based schemes are popular from single back sets. That's because the O-line can essentially just play a gap and move to the second level, a lead blocker isn't needed. 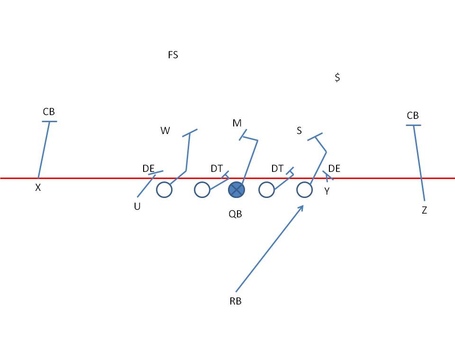 But let's say they are making an adjustment against your two TE look, be it bringing an 8th guy in the box or maybe shading the front in a way that doesn't allow you to run inside zone as well. But when you put the U-back in the backfield, put a lot of strength to a single side, perhaps they change their front or expose themselves in a different way. Well everything is the same up front. Because it's an inside zone, the cutback for the RB will be one of the inside A-gaps, so the backside DE must be cut or kicked out. The FB just replaces the U-back assignment, and now you can run inside zone with two RBs in the backfield. 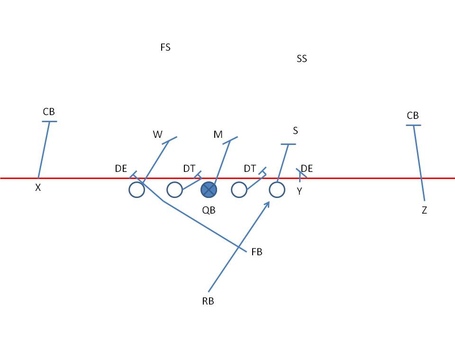 Similarly, maybe putting a guy in the slot opens up the bubbles in the D-line, making it easier for the O-line to get to the second level. Flex the U-back out and get the defensive adjustment. The only difference now is that the backside OT won't be reaching for the next level, instead he will wall off the backside DE to give the RB the cutback lane. 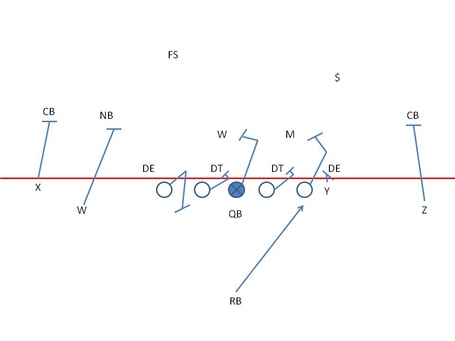 Counter Lead
So the counter lead uses a pulling O-linemen to kick out the playside DE. In this case we are using the backside OT rather than the OG to change defensive keys. In the case of Michigan, this allows them to get Schofield and Lewan at the point of attack as well. The FB then leads up through the hole and kicks out the LB. 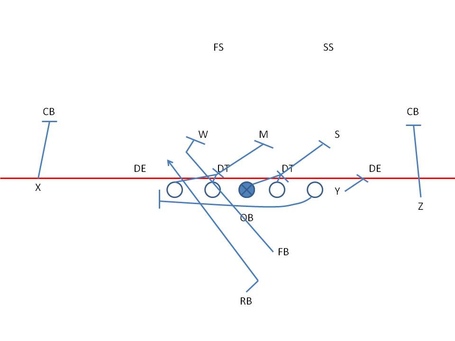 From a view point with a second TE look, you simply replace the lead FB with a lead U-back, kicking out the same player. If you want to take advantage of a defense that is fast flowing, and they give you a better look when you have another guy near the LOS, this is a simple adjustment to run the same play. 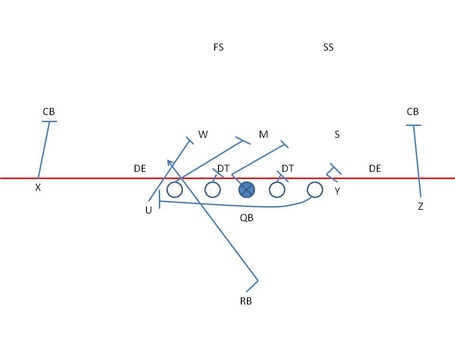 Or what if you're worried a defense will put 8 in the box, perhaps you're more comfortable facing 7 instead. Flex out your U-back and then crack the playside LB. If a team struggles forces the FS to replace the WILL, which is something that isn't always easy for safeties to do, to fill the gap and stop the RB. 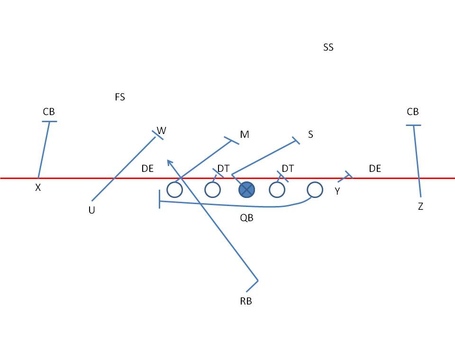 Lead Draw
Lastly, let's look at the lead draw. First, with a fold block out of 12 personnel. We see the TEs responsible for both OLBs and the fold OG leads through the hole and takes on the MIKE. 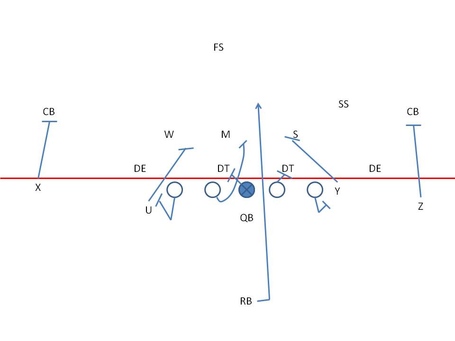 Spread out the defense, and you can run the same play but perhaps with more open space by flexing out the U-back. 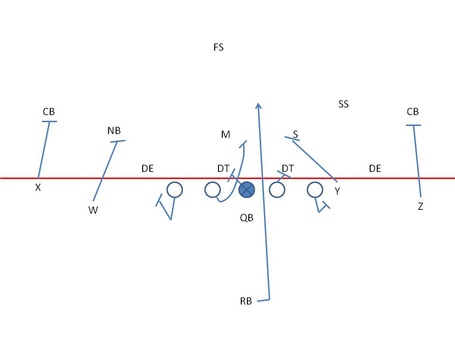 Or perhaps you've been effective with 2 RBs in the backfield. Maybe the defense is playing up but bailing fast once the read pass keys. Well, lead block out of 21 personnel. Now, rather than folding the OG, have him drop initially and then attack the OLB. The FB will take the MIKE in the middle. Same concept for everyone else, just slightly different blocking from a couple players. 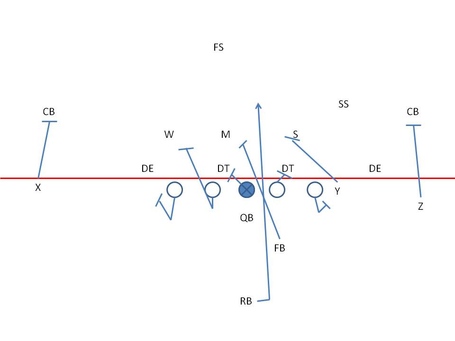 Conclusions
So what you see from here is that you can take advantage of what defenses give you. The defense won't necessarily line up the same way against different formations. They will likely make checks or shifts to try to mitigate the strength of some of the offensive formations. But if you know a play that will work against certain defensive personnel or you've seen something on film that says a team will make certain adjustments when facing certain offensive formations, you can easily take advantage of those things while maintaining a lot of the offensive playbook and keeping it simple for the offensive players. And with a U-back you can do all these things without any substitutions, allowing the OC to have a better feel for what the defense is doing, and better manipulative tools at his disposal.

Next we will look at how the U-back has versatility in the pass game.