Not only does the U-Back provide versatility and simplicity to the run game, while adding complexity for the defense, it does much the same in the pass game. Here, we demonstrate how the U-back can take up different positions to take advantage of different defensive looks, while keeping the QB reads identical to defeat any defense. On top of that, we briefly discuss why it forces defense into simplified looks, or risk getting burned with the unexpected.

Share All sharing options for: Inside the Playbook Decides it Wants to Pass the Ball to the U-Back

Introduction
While each of these formations have their own strengths and weaknesses, as we've discussed, they also have a lot in common. The pass game is no different. While clearly you can move around a U-back, put him on the other side of the formation or something else to take advantage of different pass concepts, you can also run what are essentially the same plays with different initial looks. This short as quick post will go over that idea. With a solid run game, and the versatility instilled from the U-back, you now can also use him for his other purpose: to catch passes.

The Play
We'll vary a bit what Seth over at MGoBlog described. To one side, we'll run the smash concept. This puts a high/low on the corner, giving the QB a relatively easy read in the case where he reads two high safeties. On the flip side, we'll run a bench/dig route which will inside out the flat zone defender in a cover 3. Basically, even numbers across the back: the QB looks left; odd numbers across the back: the QB looks right.

Now we'll run out of formations that give us the best chance to win. Say a defense is putting in larger personnel because they fear the run out of 12 personnel. Maybe what you want to do is move the U-back into the slot and force a LB to cover the U-back in a lot of space or to allow the U-back to use his body to box out a safety in an open area. 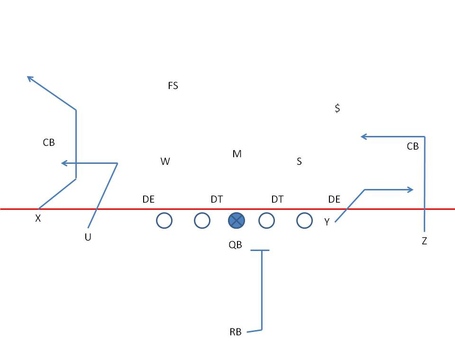 Perhaps you're facing a cover 4 defense and you don't want the LB flexed out to get to his flat zone as quickly, so you put the U-back in a closed position, tight to the OT to keep the LB inside. Now the LB has to watch the run before being able to flare out to cover the flat. 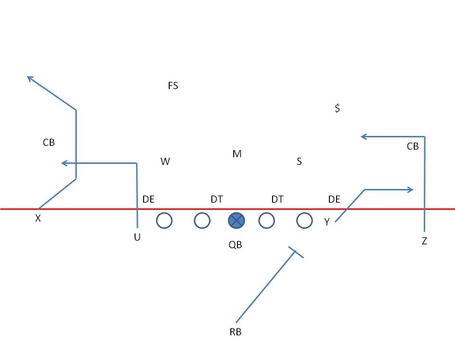 Or perhaps the best bet is to get the defense to commit downhill hard and allowing the FB to slip past the LB and into the flat. 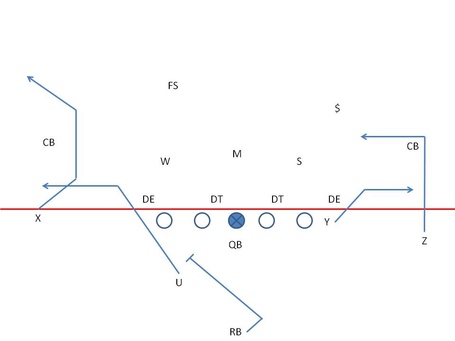 Or maybe you want to dare the defense to put 8 in the box. The conjestion on the defensive side may make it difficult to cover everyone as they flare out after the PA. 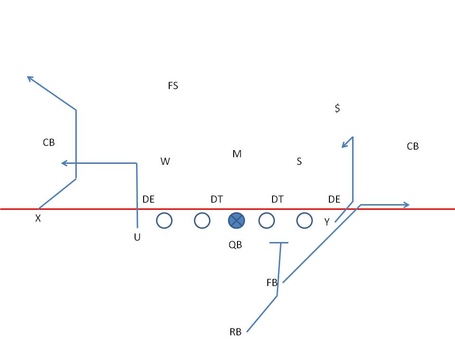 Motion
Beyond this, imagine if you will, a defense lining up a certain way against particular formations, such as checking to 8 men in the box against 21 personnel. Well what if you motion your U-back from a FB position to an off TE position. You're forcing the defense to: 1) Potentially tip it's hand in coverage; 2) Causing them to communicate a variety of things instead of just the things to get ready; 3) you're forcing them to only be able to adjust so much before you snap the ball. 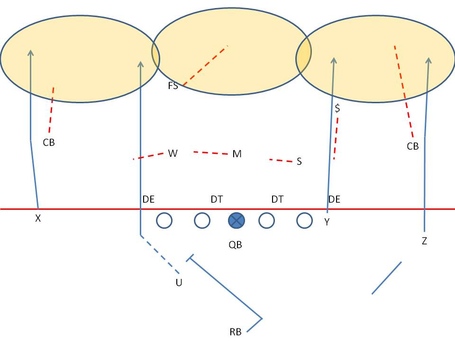 So back to the example: motion from the FB position to a closed position in the slot. Now you are capable of attacking the middle of the field, perhaps with 4 verts, but the defense only has three across the back because you forced 8 in the box. This conundrum for the defense, how to defend against this type of formations, limits the number of coverages the defense can throw at an offense. This forces defenses to run generic defenses, defenses they hope can cover the entire spectrum, rather than defenses that are designed to defeat certain concepts. Because with a TE and a U-back, you can run anything you want to run out of a pro-set or anything you could out of a spread look, and everything in between.

Conclusion
So this was a basic look, very similar possibly to something you've seen before. The point is, that the game can be simplified drastically from the offensive perspective while drastically complicating things for the defense. Simply by presenting certain strengths with one formation, you can manipulate what the defense is giving you and pick on certain things that you see on film. The OC can dictate what happens to a certain degree, and this is greatly helped by the versatility of the U-back.