Michigan heads back to the Kohl Center, looking to end a long losing streak in Madison.

There are some places in which it is natural to be uncomfortable: the doctor's office, a crowded subway, in an airport terminal line, which inevitably becomes three lines converging into one, with no one really knowing which is the true line.

For athletes, there's the Kohl Center.

The last time Michigan left the Kohl Center with a win, the year was 1999. Monica's "Angel of Mine" was a No. 1 single at the time, it would be many years before fans began angrily tweeting at recruits and the imminent Y2K was a very serious thing indeed.

The Wolverines went to Madison on Feb. 27, 1999, and won 51-39 against a Wisconsin team that would finish 21-8 in the regular season. Naturally, Michigan finished 11-18, further cementing the notion that college basketball often makes little to no sense. 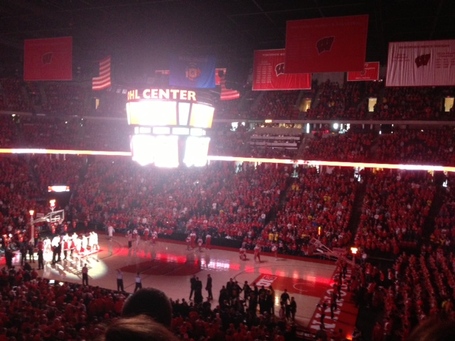 The view from my seat

Michigan entered last season's game ranked No. 3, facing a Wisconsin team that had started 6-4 but then won 11 of its next 14 games. I headed up to Madison for the game, buoyed by a cautious optimism, that this, this was in fact the year. How could it not be?

I arrived in snowy, icy Madison. Men were ice fishing on Lake Monona, seemingly unaware that a basketball game was about to take place. What a stress-free life that must be.

The sidewalks were snow-covered and even treacherous in spots. I crossed a street and an older man in his car inched forward as I approached--ostensibly upon noticing my Michigan hat--as if to jokingly say "I'm gonna run you over, buddy."

I entered the Kohl Center right before the anthem began. When it did, I stopped and waited nervously in front of a gate that wasn't mine before heading to my seats.

When it was over, I nervously clapped and walked on to Section 220. As the players did what they do when a game is about to start--high knee jumps, jittery side-to-side movement of the head, fist bumps and chest bumps, and so on--the unseen energy of the place began to crescendo. 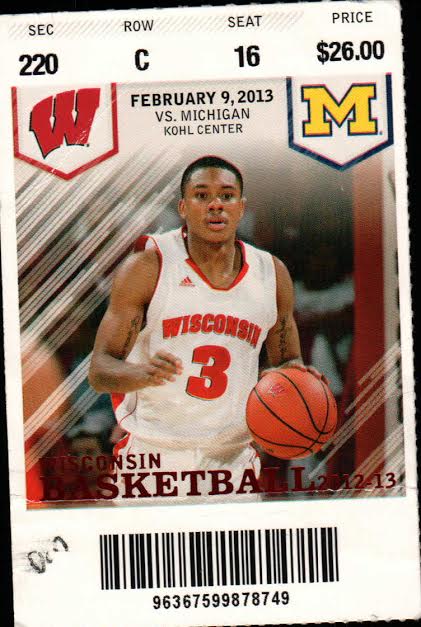 Having been a student at Michigan from 2007-2011, I never had the opportunity to see Michigan's gameday basketball experience acquire an intimidating aura (and most would probably agree that it isn't quite there yet, even now). I saw some big games, and the people who showed up for them did their best to make it a difficult place to play. Still, nobody would confuse the then Crisler Arena (now the Crisler Center), with the Breslin Center or the Kohl Center or Assembly Hall in Bloomington.

The game began, and the Badgers got on the board first, a 2-point bucket from the infuriatingly crafty Ryan Evans. Nik Stauskas answered with a two of his own, and Tim Hardaway Jr. pitched in a triple that gave Michigan an early 5-2 lead.

However, an 8-0 Wisconsin run eventually gave the Badgers a 23-14 lead shortly after the 8-minute media timeout. The Kohl Center, like many of college basketball's toughest venues, has a way of altering reality. Stauskas or Trey Burke or Hardaway go up for a jumper, and the rim's diameter shrinks by half only after the ball is released.

Now, citing the difficulty of playing on the road is kind of like referring to a very unique sort of voodoo, but it is fact real. And, somehow, it's a little bit different on the hardwood than it is on the gridiron. Perhaps it is the nature of college basketball and the manner in which fouls are disproportionately called in favor of the home team, or, the fact that basketball is far more of a finesse game than is football. Perhaps it is the intimacy of the game, where players can be seen as opposed to on the gridiron, where players can retreat into their own helmets or on the sideline among an anonymous sea of backups and special teamers.

As a fan, I have never been more nervous than I was while watching this game at the Kohl Center, last year, on Feb. 9, 2013, and I've been to Ohio Stadium and Beaver Stadium--both in 2008, when Michigan was blazing a magnificent trail of incompetence across the greater Midwest. There is something about Big Ten basketball, on the road, experienced live and in person, that makes you sweat through your shirt and watch the game in a constant Stefon pose.

Michigan went down 23-14 and I wondered if this was just going to be your classic Big Ten monstrosity, a grotesque showing unfit for consumption outside of the Big Ten footprint.

Fortunately, Michigan flexed its muscles through the rest of the first half, with six different Wolverines scoring in the final eight minutes. Michigan took a tenuous 29-28 lead into the halftime break. I had to extricate myself from the bowels of that coliseum; I headed to the concourse to get some nachos.

The halftime break came and went too fast. I wasn't ready, and, in a poor omen, the nacho cheese had already managed to dive to a temperature a shade or two below lukewarm.

Zach and Fouad look back at the first half of the season, including a discussion about Michigan's defense, Derrick Walton and Caris LeVert

In part two Zach and Fouad talk about how Glenn Robinson has come into his own, the Morgan/Horford combo in the middle, and try to forecast how Michigan will do as Big Ten play starts to heat up.

But, a second half had to be played, and Michigan couldn't just leave the isthmus claiming a 29-28 victory (which, by the way, could be a believable Big Ten score).

Ryan Evans once again opened the scoring, this time with a dunk. The two teams traded buckets for most of the half, with the apex of either team's lead being just four points. The game was a pendulum, swinging one way but always swinging back; the mechanism seemed destined to stay on this track forever. Of course, the game had to end at some point.

The Kohl Center crowd cheered loudly for every bucket in the first half, a din reaching its greatest point when the Badgers built up that 9-point lead. It was loud and intimidating. F. Scott Fitzgerald would not have liked it; it was not a nice quiet place.

The energy and noise of the place ebbed and flowed, as it it does for big games everywhere else. Even so, maybe this was partially due to the fact that Michigan was a top 5 team, but the building always contained a seemingly dangerous stock of potential energy. Whether it was a Sam Dekker bucket off of the bench, a Ben Brust triple or a key defensive stop, the Kohl Center always had the ability to turn it up to 11 when necessary.

And the noise was almost as uniform as the red of the color-coordinated crowd. Once it began, it built and built until it plateaued at a consistent, clean, thumping loudness.

For the first time all game, I permitted myself to stand up, pump my fist and give voice to my internal monologue. I instantly felt bad about it, as the fans sitting behind me, an older bunch, were very nice.

I didn't have much time to dwell on that contrition. Somehow, Ben Brust got the inbound pass and managed to push the ball far enough up the court to launch a shot that wouldn't have been the most ridiculous long-range make I'd ever seen; that is, if the situation were anything other than what it was.

I'm sure Ben Brust has made that shot in practice or alone in quiet gyms many, many times. But, after Hardaway hit that shot, the idea that Wisconsin would do what it did seemed impossible. Well, not impossible, but improbable. Apparently, I had not learned from the experience of Evan Turner's dagger against Michigan in the 2010 Big Ten tournament, or Josh Gasser's buzzer beater in 2011.

Brust crossed right in front of Caris LeVert's face, received the pass, took one dribble and launched an all-too-perfect prayer a few feet past the halfcourt line.

It didn't truly register that the game was going to overtime until the crowd erupted. I remained sitting, shaking my head. Being the only Michigan fan in that patch of my section, a Wisconsin fan a few rows down from me turned around and reached out to shake my hand. I shrugged and accepted, because why not?

Anyone who has ever watched sports at any level knew that the game was over, even though there were still five minutes left to play. The Wolverines were punchless in the overtime period, going 1-of-7 from the field. Brust's shot had apparently taken it out of the Badgers as well, as they only scored five overtime points.

Unfortunately for the Wolverines, five points was more than enough, and Michigan took its third loss of the season and its 11th straight at the Kohl Center.

This time, the roles are reversed. Wisconsin is the top 5 team and Michigan is the unranked squad with the 6-4 start. The Badgers took their first loss of the season in Bloomington on Tuesday, and they'll be looking to avenge that on Saturday.

With that said, that 1999 team, a well below sub-.500 squad, went to Madison and beat a ranked, tournament-bound Wisconsin team, so, who knows.

Perhaps the game won't be close at all, and there won't be any opportunity for late-game histrionics; after all, the Badgers are very good, and a blowout would not necessarily be a surprise.

If the game is close late, there are a few things I know to be true. For one, the Kohl Center crowd will be heard and Michigan's rim will shrink and generate a thin film of flubber for stretches of several minutes at a time.

But, most of all, there is that unquantifiable Kohl Center voodoo with which Michigan--and especially freshmen Derrick Walton and Zak Irvin--will have to deal.

Can Michigan do it? Sure, sure they can. With that said, if it comes down to it, I'm betting on the voodoo. After all, that's what college basketball is: organized voodoo presented in 40-minute bursts.

Nowhere is that more true than on 601 W. Dayton St. in Madison, Wis. Oh, to be an oblivious ice fisherman.