Snapshots: Michigan Defense's Struggles With The Screen Pass Against Minnesota

The Gophers came out with a nice screen pass play a few times in the first half that burned Michigan a couple times. Let's look at what happened and how Michigan could have done better.

Share All sharing options for: Snapshots: Michigan Defense's Struggles With The Screen Pass Against Minnesota

On Saturday Minnesota's offense rode a strong rushing performance to the first 300+ yard performance against Michigan this season.  Although the surprising thing wasn't as much Minnesota's ground game, but the ways in which a team that had just won a game with a single complete pass the week before took advantage of a Michigan defense  with misdirection.

One play in particular stuck out to me on Saturday, and it was something I wanted to look back at.  That was Minnesota's use of the quick screen pass to David Cobb to gash Michigan a handful of times.  There were three instances of the play being called in the first half, and all three would be important in the context of the drives they were in.

The first such instance was on Minnesota's first drive.  This was the one time in the first half that Michigan was able to rein in this play before it sprung for a big gain. 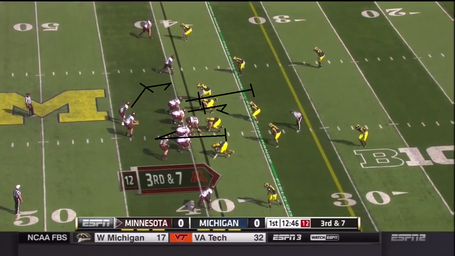 At the snap the left side of the line does a normal screen blocking setup, with both guard and tackle making contact before schucking Michigan's DL — so much so that Ryan Glasgow nearly falls after disengaging — before heading to the second level.  David Cobb acts like he is going to pick up the blitz (making this look to me like a fake slide protection look) and kick out a rushing Frank Clark on the edge, but he simply gets inside leverage to force Clark outside before turning and waiting for the dump off pass. 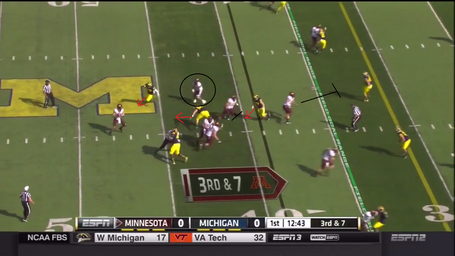 With Clark rushing hard off the edge and Glasgow trying to regain his balance, the only defensive lineman that has a shot at this one is Brennen Beyer.  However, he doesn't identify the screen quick enough to fight outside of the OG, and once he is sealed off this becomes a play for the linebacker in space. 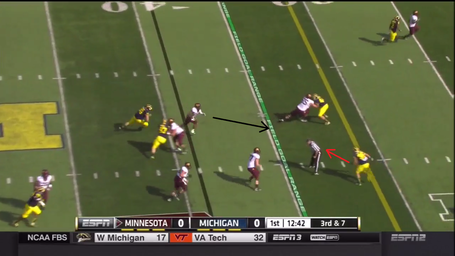 Jake Ryan eats LT a yard in front of the first down marker and he does a good job contacting the block and using his hands to keep leverage and fight it off to help.  Meanwhile, the backside guard peeled off after a few backward steps to close off the backside of the play and is now trucking downfield at Joe Bolden.  Thankfully Bolden has started to close down on the play.  Cobb, for what its worth, follows the lane the play is supposed to develop, but he would be better served heading outside.

Bolden is able to make the tackle with Ryan peeling off behind him and Glasgow trailing.  Michigan held this play to just six yards on this play.  That would be by far the best result of the three times Minnesota went to it, although the Gophers would use more misdirection on 4th and short to pick up the first down and keep the drive alive.

Gone was that play for almost an entire quarter, until the drive following Michigan's first score of the game — you know, one of the bookends on 30 Minnesota points.  This time the Gophers run it to the short side of the field on 2nd-10. 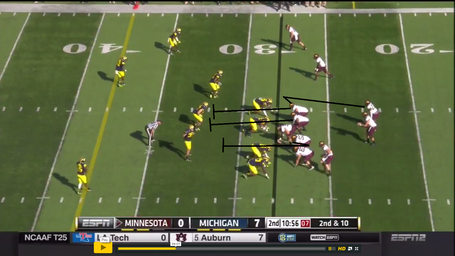 The setup is all the same.  The line fakes at slide protection as the RT and RG both ole their rushers and head out.  Cobb sets up to force Taco Charlton outside, 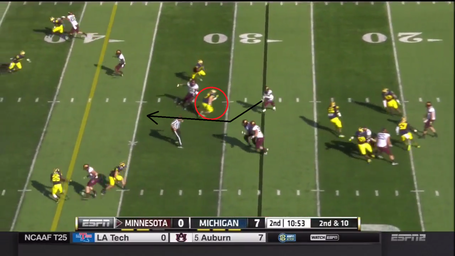 Clark and Pipkins are the DL on the frontside of this and neither reads it very well after the OL bails, so Michigan has no trailer (as Glasgow was able to recover to do last play).  Mysteriously, the tackle runs right past Jake Ryan before doing an about face and trying to block him.  Ryan is free, but his angle is bad with Cobb moving down the line of scrimmage.  Ryan attacks straight upfield and dives at an unsuccessful tackle.  If Ryan takes a better angle and has Pipkins trailing closer, this play is cut down for only a couple yard gain and Michigan has Minnesota behind the chains for another long third down.

With the score tied and Minnesota driving into Michigan territory in the waning seconds of the second quarter, Minnesota once again goes back to the play 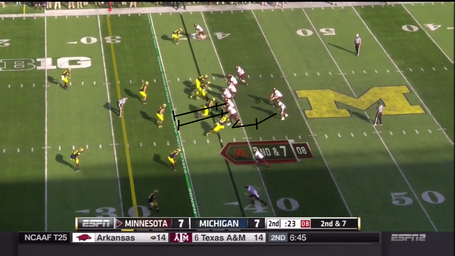 Michigan has Charlton rushing off the edge, Glasgow the DT that is unblocked, Ryan the linebacker to the RB side and Bolden on the backside.  There are a few differences in the way this one is played from before. 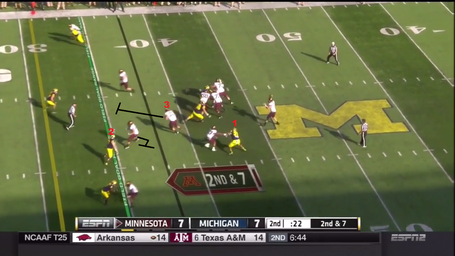 First, Taco Charlton does a better job reading the running back's intentions (1) after taking himself a ways out of the play earlier in the quarter.  He is still in contact with the running back here and has already settled his momentum to start tracking the back.

The problem is, Jake Ryan has shuffled a few steps outside (2) which gives the tackle and easier block by simply walling Ryan off.  Ryan tries to fight upfield then inside around the blocking tackle, but that simply has him trying to round the corner and catch Cobb from behind — a losing proposition given Cobb's abilities as a runner.  This also knocks Taco Charlton off his pursuit angle.

Finally, unlike the first time this was run, the guard doesn't stick around to worry about throwing a DL off the play.  Instead he moves downfield toward Joe Bolden on the backside and gets a nice cut block to open up space. 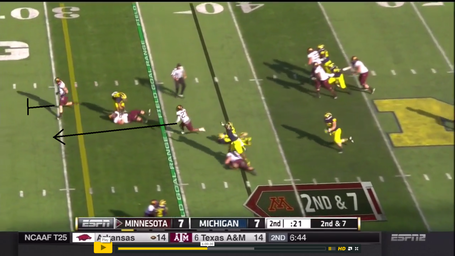 With both linebackers out of the picture, Cobb has a nice lane to pick up the first down and put Minnesota solidly in field goal range.

What did we learn?

First, Jake Ryan didn't have a great time dealing with these.  The two that went for first downs (both in the second quarter after Michigan had already seen it once) were both plays that he could have done a better job cleaning up.  The first he took a bad angle at Cobb and was forced to try and ankle tackle Cobb as the running back cut upfield past him.  The second he drifted, didn't engage his blocker head up, and therefore couldn't fight through the block for a good tackle attempt.  The one play Michigan chopped down short of the sticks was thanks to a good open field tackle by Joe Bolden, who took the proper angle and wrapped up.

However, Michigan got good pursuit from the DL on two of the three plays, and if Ryan plays the last one better, Michigan has a chance to force Minnesota to call its last timeout after a nominal gain.

Screen passes are good changeups because if they are set up correctly you're putting the defense in a lot of disadvantageous positions where linebackers and defensive backs have to take on blocks from big dudes in space, and even bad blocks (such as the RT just kinda being there on play two and keeping Bolden a step behind in pursuit) can have good consequences.  Michigan needed two better plays from Ryan to cut these plays down at the line.