I have a few more screenshots and things to talk about, so here they are, and all of them point toward mistakes from the back seven for Michigan.

Share All sharing options for: Snapshots: Examining Michigan's Struggles At Safety And Linebacker Against Minnesota's Misdirection

I've already touched on Michigan's issues defending Minnesota's screen pass in the first half of Saturday's game, and those plays are indicative of a bigger issue against Minnesota: Michigan had too many mistakes in the back seven in run support.

Let's look at the second play of the day. 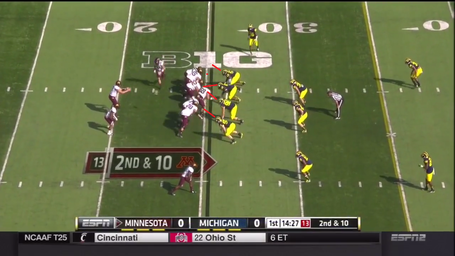 Minnesota is going to run a zone read to the boundary side.  Michigan is slanting that way, except for Willie Henry, who cuts straight upfield. 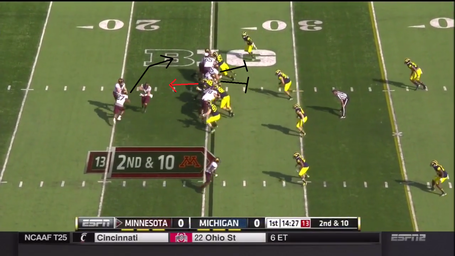 Clark has stood up well to a double on the edge and Glasgow is engaging a blocker to cut off any cutback lane right at the LOS.  Willie Henry, meanwhile, is hauling ass into the backfield. 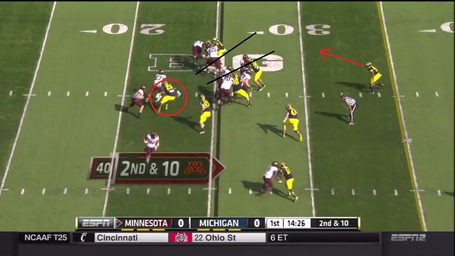 This goes poorly, as Henry can't get there in time to get the back, meaning that there is now a gap right where it looks like he should have slanted.  That's a bust, but a three to five yard bust because Jeremy Clark should be flowing quickly downhill at a good angle to either tackle Cobb before the 30-yard line or else  force him to cut wide or back into the pile. 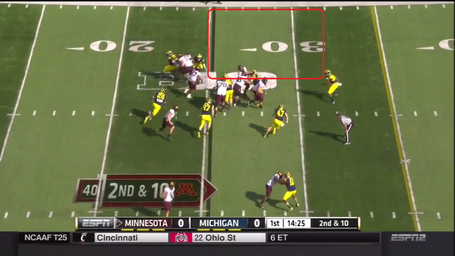 Cobb is into the hole and Clark has started to attack at this point, but there is a good amount of field that Cobb has to work in, without much help for Clark. 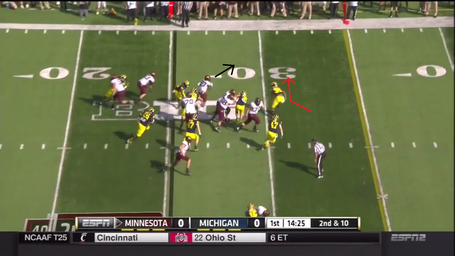 Clark's angle wasn't quite wide enough and now he has to adjust it parallel to the LOS as Cobb is hauling it for OOB about five yards past the sticks. 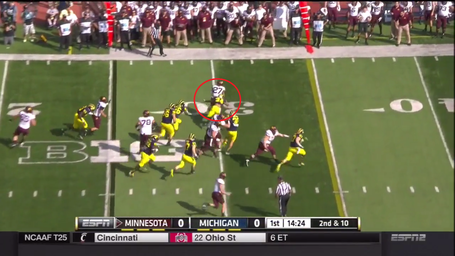 Because of Clark's poor angle he can't get his helmet across the tackle which lets Cobb squirt out (bringing down Cobb on first contact would be an issue all game long).  Because of Clark this play went from a manageable run chopped down short of a first down to a 30+ yard scamper that puts Minnesota in Michigan territory.

Now in the second quarter after Michigan has scored to go up 7-0.  Minnesota has taken the ball down inside the ten and has a third and one.  A stop here likely forces a field goal and keeps Michigan in the lead (although there are no guarantees.  I've already talked about failure to contain on bootlegs, and this is another instance of that. 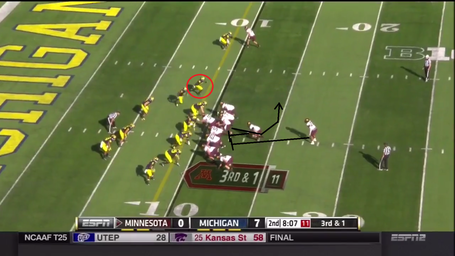 Minnesota is going to fake a run to the strong side and then boot Mitch Leidner out to the wide side of the field with Max Williams releasing on an out route after selling a block.  Michigan has been doing this same thing with Gardner for a couple years now.  It is not a novel concept.

Jarrod Wilson is the last man down the line of scrimmage with James Ross inside of him and Jake Ryan lined up as a linebacker a few yards off the strongside end. 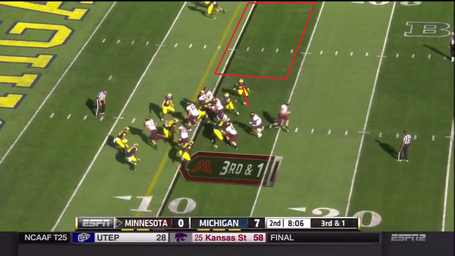 On the snap both Ross and Wilson tear down behind the tackle to try and help blow this play up from the back.  Problem is, there is no way that this playcall isn't supposed to leave someone for contain.  That is most likely Wilson, who bites so hard on the fake that.. 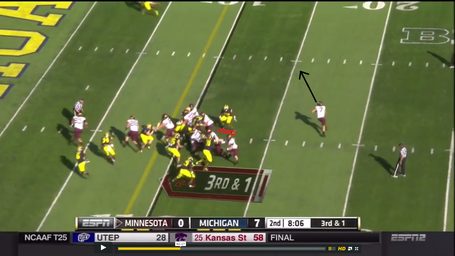 A frame later he is turned the complete opposite direction of Leidner.  There goes any chance Michigan has of stopping this one before it goes for six.

Also, had Wilson got out to stretch Leidner out, Williams was running an open route, signaling another bust in coverage by Michigan.  This one is probably on Jake Ryan, who is just kinda standing around inside waiting for something.  Either that or Jeremy Clark busted and should have taken Williams instead of going with Raymon Taylor on the other releasing TE to the fake side.  My guess is Ryan since Clark started lined up opposite the formation.  But I'd be willing to hear arguments as to what people think this coverage is.

This play late in the second quarter on third and five is a natural extension of the above.  This time,everybody bugs out for the run.  This ends poorly. 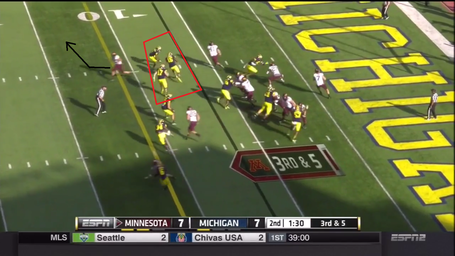 In that box is (top to bottom) Blake Countess, James Ross, and Jake Ryan.  Now, I'm no expert, but I would imagine one of these guys is supposed to have coverage on that TE, but given the reactions of all three, I'm not really sure who had who, but my money is on Countess as he is the last guy down the line and likely wouldn't be matched up on coverage against a U-back coming in motion across the offensive formation.  That is, unless he was supposed to hand off the deep receiver to safety help (Michigan had a one-high look).  Also probably doubtful, but without knowing the playcall, its hard to place blame. 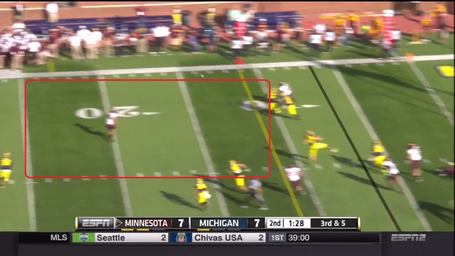 But holy cow, is there a lot of blame that needs to be handed out.  That is a 15 yard box from hash to sideline in which Michigan doesn't have a defender and a wide open receiver is awaiting a pass.  Luckily Leidner doesn't hit his man in stride, forcing an awkward catch that lets Wilson clean up as the receiver stumbles.

Man, that has to be on Countess.

More adventures in Michigan's struggles providing run support.  This is immediately following the Shane Morris fumble, and Minnesota has a big chance to put the game away with a touchdown thanks to a short field.  The Gophers dig into the bag of tricks in an effort to get the ball in the red zone right away on a big play. 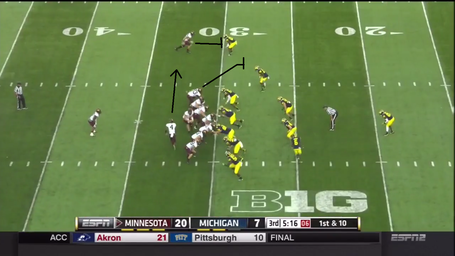 Minnesota lines up in a two tight formation with a flanker split wide and another receiver coming across the formation for an end around.  The tight end is going to release off the edge to try to pick up a block on Jarrod Wilson, which Wilson is kind enough to allow him to do easily. 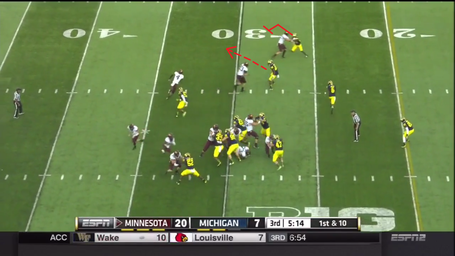 Frank Clark rushes too far upfield and can't widen his path in time to stretch the play out.  There are two relevant defenders left: Blake Countess taking on a block from the wide receiver and Jarrod Wilson about to deal with a tight end inside of him.  Countess's job is to set the edge and not give up the sideline to the ball carrier.  In the above picture you can already see him stepping around the blocker to establish outside leverage and force the ball inside.  Jarrod Wilson needs to do the opposite. He has help inside and can make a play near the line of scrimmage if he can get leverage on the blocker.  That will either turn the play back to Michigan's help, or best case scenario, Wilson can make an open field tackle and chop this down for no gain. 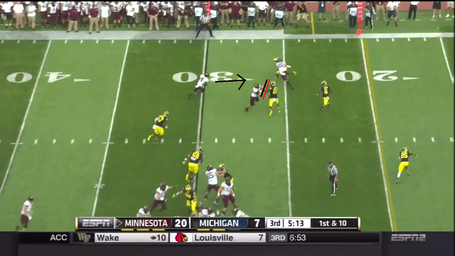 Instead he hesistates, allows the tight end to get a good block set, and the TE drives Wilson back to the point where he doesn't make contact with the ballcarrier until after the first down has already been earned.  It isn't an easy play, but it is one Wilson has to make.  He ate that block and gave himself no chance.  Against bigger blockers it isn't easy for safeties to win one on one blocking battles, so they have to get to the spot quicker to avoid direct blocks.  Wilson didn't do that here, and Michigan gave up a first down because of it.

UM Defense Struggles With The Screen Pass vs. Minn

The Gophers came out with a nice screen pass play a few times in the first half that burned Michigan a couple times. Let's look at what happened and how Michigan could have done better.

The Wolverine defense has been quite good this season, and even held this game within one score through the third quarter until Michigan's offense imploded with two turnovers on back to back drives to swing the game 14 points in Minnesota's favor.

However, Michigan wasn't always great dealing with Minnesota's constraint plays.  The Gophers used misdirection all game long to catch Michigan's safeties and linebackers in bad positions.  It didn't always happen, but there were enough plays where three yards turned into 30 because of a mistake that Minnesota was able to put up enough offensive points to bury Michigan.

Furthermore, we saw something that other teams might try to replicate through the season.  Bootlegs, screens, end arounds, etc. are all good ways to neutralize an opposing defensive line by either getting the edge quickly or getting the ball over the heads of the line.  Michigan's best defensive position group this year has been the line, and while teams like ASU and Miami chose to attack Michigan's defense with quick passes to avoid the rush, Minnesota showed that Michigan also has struggles against plays designed to catch linebackers/secondary players thinking a split second too long while going over or around the defensive line.