Word out of Ann Arbor is that there's a lot of moving around, mostly on the defensive side of the ball.

You've probably heard by now that several of Michigan's players and staff are changing positions, primarily on defense, perhaps in response to the Wolverines' final two games last season against Ohio State and Kansas State, which featured two of the worst defensive showings in the Hoke era.

Here's a basic run-down of all the changes we've been able to track so far:

Everyone else seems to be staying put for right now.

ANN ARBOR -- Michigan senior Jake Ryan begins the final spring practice of his career on Tuesday. And he'll do so at a new position.

Michigan coach Brady Hoke, during an interview with Ann Arbor's WTKA 1050-AM on Friday morning, said that the coaching staff has opted to move Ryan from strong-side linebacker to middle linebacker for the 2014 season.

"He's one of our best football players instinctively, but when he's playing SAM and you face those detached formations, it gets him away from the action at times," Hoke said. "Just think back to the Ohio (State) game, where we had a guy who is a pretty daggone good football player and he's out of the box not (being able to) make plays.

"This will give him an opportunity to be more prolific for us."

James Ross III will take over at SAM. Via MLive's Nick Baumgardner:

Royce Jenkins-Stone will also reportedly join him. This move was made supposedly because Hoke announced that the defense will be more of a 4-3 Over than a 4-3 under. Via MGoBlog:

Michigan will run more of this: 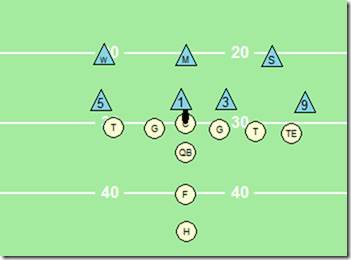 There has been much speculation that this is largely in response to offenses becoming more spread-oriented, and Seth at MGoBlog speculated that Michigan might eventually do away with the SAM position altogether.

There are some changes on the offensive side of the ball as well.

Redshirt freshman Wyatt Shallman is set at H-back (no surprise there, it fits him better than running back), and Keith Heitzman is moving from defensive end to Tight End, also via Baumgardner:

Wyatt Shallman is at H-back and RB, with Heitzman at TE

With [Willie] Henry seemingly locking down three-tech that potentially bounces out one of Strobel/Wormley/Godin to SDE, where Brennen Beyer is probably your starter anyway. Heitzman gives Michigan a shot at blocking someone, anyone, and won't be missed.

Defensive back Ross Douglas is moving to running back. Via MGoBlue's twitter:

That's kind of an odd move, in my opinion, given Douglas's size. I'm not even sure he's heavier than 180 lbs. However, with Thomas Rawls' transfer to Central Michigan, it wasn't out of the realm of possibility.

Hoke: The plan is to get [Devin Funchess] 'schooled' up on the outside.

Although "schooled up on the outside" isn't exactly a clear as crystal confirmation. If Funchess is officially moving to wide receiver, it's a good move. He hasn't been the blocker that he's needed to be at tight end, but he's too much of a receiving threat given his size and his hands.

Lastly (at least for now), Brady Hoke announced the current starting line-up for the offensive line. Via Kyle Bogenschutz: