That was one entertaining first season of B1G hockey, wasn't it?

This was the final weekend of the regular season so let's take a look at how things ended up for everyone.

So the Gophers went into the weekend needing only 2 points to clinch the first-ever Big Ten Championship. They got the two points after going to overtime with Michigan on Friday night. Not only was it the first Big Ten Championship, but it was also Minnesota's third-consecutive conference title going back to before the new league's formation. Saturday's result was much different, losing to the Wolverines 6-2 on Michigan's senior night.

After being down 3-1 to the Spartans on Friday, the Badgers' Nic Kerdiles and Tyler Barnes evened things up until MSU's Villiam Haag put Sparty back up by one. Wisconsin's Chase Drake then tied the game at 11:41 in the 3rd to send the game to the extra session, where the Spartans' Lee Reimer would score the game winner. The Badgers then used a 4-goal first period by four different players and traveled back to Madison with the victory.

The Wolverines had been on a bit of a roller coaster with their performance during the conference season, and Friday was no different. After being down, they were able to come back and tie the game for the extra frame, but then fell in that extra frame. When asked about adjustments that would need to be made for Saturday, Andrew Copp said, "I wouldn't say too much tinkering is necessary, it was a good hockey game, we just didn't end up on the right side of it." That changed on senior night thanks to Luke Moffat, who ended his career at Yost with two goals on the way to the 6-2 win.

Lee Reimer scored the game winning goal just 46 seconds in overtime to take the win against the Badgers on Friday night. In addition, the Michigan State power play was an impressive 3 for 3. As stated above, the Badgers were able to put together a fantastic first period and defeat Michigan State on Saturday, even with the Spartans scoring the final three goals of the game. Michigan State has finished the season with a losing record for the second year in a row, and will be the 5-seed in the upcoming conference tournament.

After Ryan Dzingel and Nick Schilkey each tallied three points in Friday's 4-2 win at Penn State, the Nittany Lions turned around on Saturday and took down in a reciprocal 4-2 win. Ohio State's freshman goalkeeper, Matt Tomkins, had 28 saves in the Buckeyes' losing effort on Saturday, while Penn State's Matt Skoff walked away with 27 saves.

Welcome to the Big Ten, Penn State. The Nittany Lions got a good win against the Buckeyes on Saturday, but the win was just one of three in the league. The other two came against Michigan...hang on a second while I punch something...Okay, thanks; even with the poor record, I think we can expect good things from the Penn State program in years to come.

Here's the bracket for this week's conference tournament... 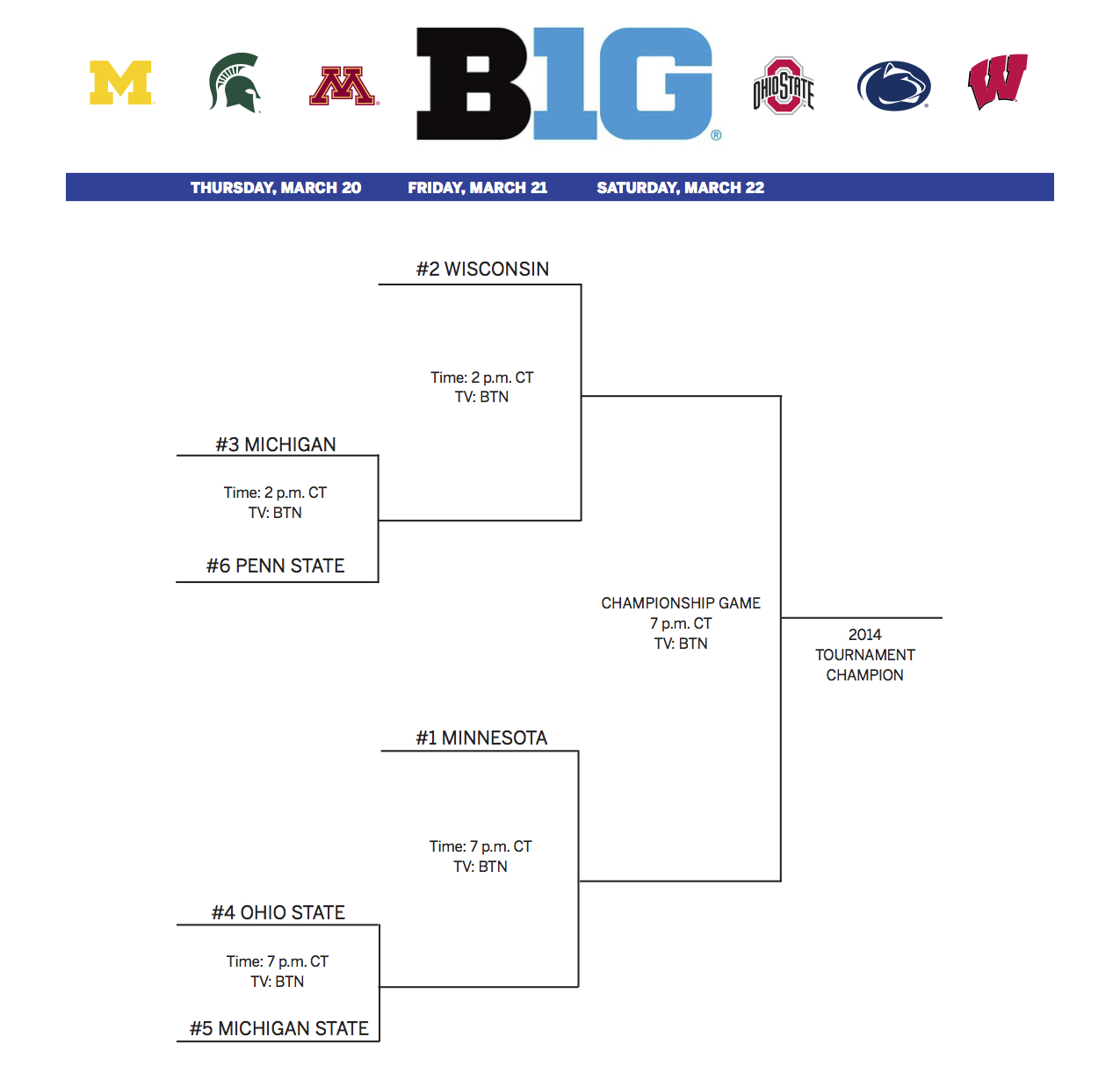 Final thoughts on the regular season

It's been an interesting year with the new league, and it has been a blast covering it. Seeing old rivalries continue (Minnesota and Wisconsin) and some rivalries get renewed (Michigan and Minnesota), I think Year One has been a tremendous success on the ice. Off the ice, we're talking about it, aren't we? You're reading this. This will hopefully be shared on Facebook, retweeted, and perhaps commented on down below. Maize n Brew isn't the only site covering it, either. Now, I've only been a part of MnB/SBN for a little over a year, so perhaps the hockey coverage isn't something new. But the league is new, and that means that our league's communities will have even more opportunities to cross over, collaborate, brag, and bemoan. It's good being in the B1G!

Next Up In Big Ten Football