Time flies, and the Shane Morris and/or Wilton Speight era is right around the corner.

Share All sharing options for: Michigan Football: Taking an Honest Look at the Future of Wolverines QBs Wilton Speight and Shane Morris

At the moment, Devin Gardner is Michigan's Quarterback of Today.

Conversely, Shane Morris, a sophomore, and Wilton Speight, a true frosh/early enrollee, represent the arms of the future.

Essentially, there is a pair of camps, two schools of thought regarding said future: Corner A holds the bucket for Morris, a homegrown prize out of Warren De La Salle; Corner B readies the stool for Speight, a Virginia kid whose reputation couldn't be contained by the Richmond area.

However, circus-like hype and hoopla surrounded 4/5-star Morris' recruitment. That wasn't the case for Speight, who barely pulled 3-star rankings but received offers from upper-level programs.

There is no need to choose sides right now--or at any time, really--but taking a serious, honest look at the Young Guns is necessary before diving headfirst into the spring-game mindset (not that you haven't already...).

With Whom Will Michigan Win?

Prior to his freshman year, Morris was horrible during the Under Armour Game. The speed of that pre-college contest appeared too fast for the high-profiler. Subsequently, he lost a few fans and supporters after a dreadfully bland, are-you-kidding-me?! completion rate.

Pro-stylers are supposed to be comfortable in the pocket--that's where they excel. They're supposed to complete passes and deliver nice shots for their receivers.

Not a chance. What a grossly inaccurate recruit ranking...or so some thought.

Well, later on, he proved me wrong. Very wrong. Morris is far from a certified star--however, his charisma, confidence and overall demeanor during the Buffalo Wild Wings Bowl Disaster was impressive...a coming-of-age display of maturity...pretty good.

And if it wasn't enough to encourage Michigan fans, well, they're simply expecting too much. Morris maintained an upright approach (literally) and threw short, accurate darts. He moved well, despite having limited assistance from his "offensive line."

Despite the 31-14 thrashing at the hands of K-State, Morris, whose hands were basically tied and cuffed by play calling, wasn't the same timid kid with an overblown ranking. No, that was the kid in the Under Armour Game--and that kid didn't make the trip to Ann Arbor.

There is no questioning "if" Michigan will win with Morris. It's "when?"

And that's the dilemma.

Brady Hoke and Doug Nussmeier have two real-deal starters. Speight is destined for a solid collegiate career, but the first go must be given to Morris--right?!

Derrick Green was given the first opportunity. He could end up as No. 2 behind running back De'Veon Smith, but that's how the cookie crumbles. He was a must-get target, therefore, he "must get" the starting nod.

The same applies to the quarterback situation.

Plus, Morris already has the bowl game on his resume. Speight doesn't--he was competing against high-schoolers a little more than a year ago. Enrolling early will help place him in the conversation. But at this time, the job is really about Gardner vs. Morris..

Of course, don't totally erase Speight from the list of potential No. 1s. College football can get funny. He seems to have better feet and mobility, but Morris probably has an edge in the arm-strength department. 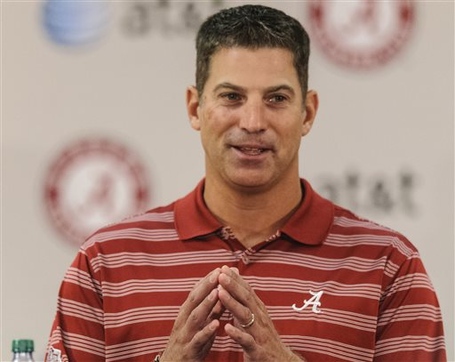 Nuss is a lefty. So is Morris.

A career-backup, Nuss spent the mid-to-late 1990s with the New Orleans Saints and Indianapolis Colts before moving onto coaching at various levels. He has NFL/CFL pedigree, and of course, the Alabama tag. Pairing him with Morris is a systematic fit.

Pro-style is the style in Tuscaloosa. Eventually, it'll get back to being the conventional mode of operation in Ann Arbor.

Boom! Match made in Football Heaven.

For quarterbacks, seeing the field is everything. In theory, taller quarterbacks supposedly see more. But don't tell that to Drew Brees or Russell Wilson, two shorties who excel in the League due to incredible vision.

They laugh at that notion--taller isn't always better.

But shorter is almost never better. They're the exceptions.

Nuss had a tallish guy in A.J. McCarron, who, at 6'4," is about an inch taller than Morris and two inches shorter than Speight, who, at 6'6" and 220 pounds, has ideal, Peyton Manning-type size.

Denying the "should I play the tall kid?" curiosity could be difficult for Nuss. If not he's not redshirted, tinkering with Speight during severe blowouts may be an option. Of course, 2014 would have to be much different than 2013, a season in which Morris had a minuscule 47 attempts (29-for-47, 261 yards, a pair of picks and touchdowns).

Nuss and Everyone Else

During the spring game, Michigan will get a better idea of its upcoming QB pecking order, which should look like this: Gardner/Morris, Speight/Bellomy.

Gardner and Morris should command most of the reps, but Speight is doing a respectable job of staying afloat. Keep in mind that he's much younger than the rest of his signal-calling counterparts. The chances of him playing--let alone starting--are slim to none.

It certainly wouldn't hurt Michigan to shelve him. After all, Morris is supposed to be The Second Coming--and he's had just one solid start in which from to measure.

Nuss divulged the following quarterback-battle-info to reporters in February, via MLive.com's Nick Baumgardner:

There's a lot more film of Devin than there is of Shane. But when you go to game footage and watch film from last year, you look at the things we didn't do well and the things we need to improve on--we're in that process right now as a staff, evaluating what we want to have and what we want to do. That's an exciting thing.

You won't miss (Speight), he's a big dude. I got to know Wilton a little bit when I was at Alabama, we recruited him. His learning curve is much steeper than anyone's, but I'm excited about the way he's adjusted and acclimated initially. Everything's new (for him), he's done an excellent job of handling that.

In terms of tomorrow, Morris and Speight are it. Due to laughable offenses of years past, it only makes sense to go all-in with these two. Michigan is in desperate need of reliable, cornerstone-type, pro-stylers.

Restoring the O-Line to its old luster is imperative. That takes time,(too much under Hoke), and since Morris seems to be the next guy in line, he could be the one to suffer the most growing pains--and that could create a way for the coaching staff to bump up Speight's place on the depth chart.

Michigan will win with both guys. However, more victories could be in Speight's future, as the majority of the offensive line is at least two years from being rubber-stamped and endorsed as true Michigan quality.