Michigan Football Spring Practice: Grooming Gardner and Green Should be Nussmeier's No. 1 Priority

If Doug Nussmeier believes that Devin Gardner and Derrick Green are the future (for 2014), he must treat them well and let them lead the way...OK, you get it.

Share All sharing options for: Michigan Football Spring Practice: Grooming Gardner and Green Should be Nussmeier's No. 1 Priority

(Ed. note, Z - Everyone give a warm welcome to Adam Biggers, who has joined the staff here to help with recruiting and football coverage. He has written at the Flint Journal, MLive, and B/R in the past and we are excited to have him on board.)

The addition of Doug Nussmeier to the Michigan coaching staff is an improvement, let's get that out of the way.

However, let's also be realistic: He's not the cure-all to the Wolverines' woes. No, not even Chip Kelly could whip this lethargic--but frustratingly talented--offense into shape in just one season.

But Nussmeier has pedigree and credibility, especially when based on his resume at Alabama. He could head such a positive turn of events for Brady Hoke's staff--that's the popular thought, anyway.

A seamless exchange of coordinator duties, of course, should make things a little easier. By now, Michigan is probably looking for Easy Street after running over nails and flattening tires on Borges Boulevard.

So far, there aren't any issues with Nussmeier, who assumed the post in January. For once, worrying about an effective play-caller shouldn't be part of preseason concerns.

Feared for both the run and the pass, Nussmeier's offense consistently created All-SEC threats, even if for just two years--it was 'Bama, he gets a pass.

Quarterback A.J. McCarron, regarded as one of the program's greatest, certainly flourished. The stable of Tide backs surged while in Nussmeier's care.

That bodes well for the Wolverines, who have the talent--current, up-and-coming and soon-to-be--at quarterback and running back.

However, they have yet to see the results.

Nussmeier's focus should be on Devin Gardner, who enters his second spring as the No. 1 signal-caller, and Derrick Green, a one-time 5-star prep ball-carrier who was recruited to be another Maize and Blue bruiser.

Get to Know Gardner 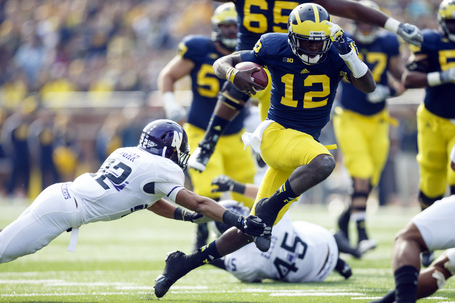 A senior and leader, Gardner certainly has the arm strength and experience to guide Team 135 to a successful season--anything short of nine wins (remember this tune from last year?) would be a gross disappointment.

Evident for two years, Gardner's athleticism at the position is a major bonus and poses ridiculous matchup problems for the opposition.

Harnessing that raw power is the next step--and it's probably something different for Nussmeier, who's worked with pro-style, statuesque quarterbacks in the past.

There's a new day for everything, right?

If Nussmeier and Gardner see eye-to-eye, there's no real reason why Michigan shouldn't have one of the Big Ten's best quarterbacks in 2014.

In 2012, Gardner finished the year with a 3-2 tilt. He was competitive during the Outback Bowl loss to South Carolina, and that was enough to prompt optimism for 2013.

Gardner had great short-term numbers which were cited by all; he was a shoo-in for rising star status.

Here are the numbers (via Sports-Reference.com):

In 2012, he threw for 1,219 yards, 11 touchdowns and five interceptions. Keep in mind that he assumed duties after Denard Robinson was injured. Michigan was in need of someone to save the season. Gardner was more than helpful.

So, of course, expectations were sky high for 2013. Despite throwing for a respectable 2,960 yards, Gardner, a 6'4," 210-pounder, couldn't string together truly strong performances on a week-to-week basis.

Interceptions absolutely killed his momentum, and don't think for a second that Stephon Tuitt's pick-6 didn't get into his head.

Once settled, Gardner looked OK--see the Indiana game (but remember that the Hoosiers defense wasn't great). A calmer, more confident and injury-free quarterback could be on the horizon.

Green is Too 'Green' 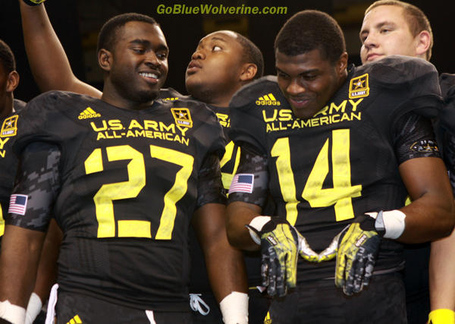 Entering college as a top-rated back didn't help Green see early playing time. Showing promise during a blowout, he rushed for 58 yards and a touchdown as the Wolverines crushed Central Michigan 59-9 in Week 1.

He followed his decent debut with just two carries in the next three weeks. In fact, the 5'11," 230-pound frosh didn't see stable action until much later in the year.

For starters, there were talks about his camp weight--a husky 240--and that supposedly kept him out of the rotation.

But for some reason, even after losing weight, Green wasn't immediately inserted into the starting lineup. That role was reserved for Fitz Toussaint, who spun his wheels in the mud for the entire season.

It seemed as if Borges refused to go to anyone but the senior.

Then, as luck would have it, Green, along with De'Veon Smith, saw carries as the season came crashing to an end.

Here are his numbers (via Sports-Reference.com):

As a freshman, he rushed 83 times for 270 yards and two touchdowns.

The moral of this story, boys and girls, is this: Green wasn't given time to show what he can do, and it's impossible to get an accurate look at his talent level without a full season of reference.

Nussmeier has dealt with high-end prospects who wait their turns.

Backups with 4- and 5-star status aren't uncommon in Tuscaloosa. Hopefully, for Michigan's sake, Nussmeier knows how to get to Green and let him know that 2013 is in the past--forget about Borges and forget about 3.3 yards per carry.