Glenn Robinson III and Nik Stauskas are off to the Association--as we all pretty much expected. This post features audio bits from the presser, as well as a few afterthoughts.

Tuesday was a somber yet celebratory day for Michigan basketball, which said goodbye to sophomores Nik Stauskas and Glenn Robinson III, a pair of Wolverines wingers bound for the NBA.

Throughout the festivities, I pretty much bounced around between GR3, Stauskas and coach John Beilein. Along the way, I asked some questions and got a few answers.

But I also joined conversations and recorded bits from other media members.

That said, here's what I have to offer:

(Get more below--two .wav files for your listening pleasure).

GR3 was asked about his game/confidence, and he said the following:

"I’m going to be a great overall player at the next level—I can play defense and offense. The sky’s the limit for my talent. With hard work, it’s going to come. I think people a lot of people are going to be surprised and shocked (with what they see)."

He went onto say that he didn't mind playing the 4 if it helped Michigan win. Also, he talked about influence from family and former players--namely Trey Burke and Tim Hardaway, Jr.--and why he chose to skip his final two years and enter the draft.

Stauskas also talked about his decision. His mother and father, along with news from the advisory board, helped him make the right call.

I got all sappy with Beilein. We talked about dreams and all of that jazz. Same with Stauskas, who I thought showed a great deal of emotion and appeared to be on Cloud 9. I think he was envisioning his pro debut, but I could be wrong.

Nik, if you read this, hit the comments and let us know.

Oh, and I hope you like bad photos. I took a few with my phone. 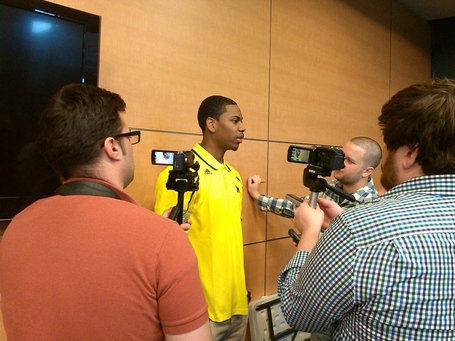 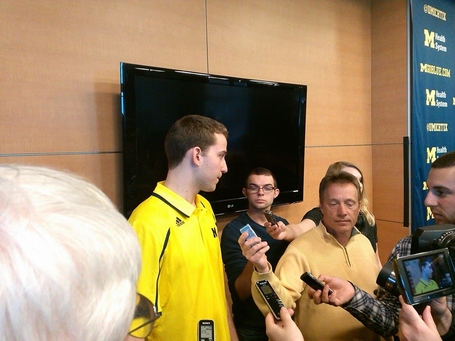 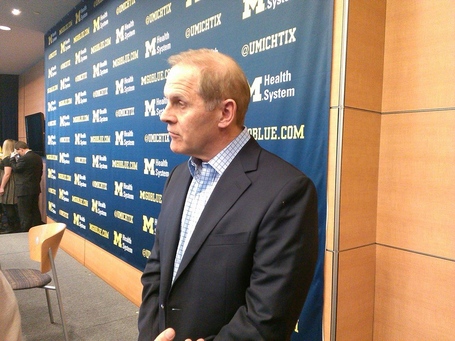