Your Friday Drinking Instructions Remind You To Pay Homage

Share All sharing options for: Your Friday Drinking Instructions Remind You To Pay Homage

Bow down, brother pay homage
don't spill hate all on my garments

Collegiate ins-ti-tu-shun, I got your fresh, man
jump shots, bank shots, fuck your arrests
fuck the pig rules, no pork on my fork
Peace God cause you know a nigga just went Ham

Need something to drag you out of the offseason malaise? How about the third-best sporting event of the year? Where else can you drink bourbon in the infield and forget about the actual event - missing nothing?

That's right - it's Derby time. For just one day a year, this blog cares about horse racing. And juleps. Mostly the juleps. But don't tell the organizers that. Zach will appreciate that the Taste of the Derby is presented by the world's preeminent bourbon producer, Stella Artois.

Wait, no, actually, the Taste of the Derby is being run by a beer company. My only explanation is that Mark Emmert and Sepp Blatter were running the organizing committee. It's a sad day for the Maize n Brew staff, because we're making a historic addition to our Maize n Brew Beer Shitlist (TM) - a list containing only Heineken up to this point now has a second member. Come on down, Stella Artois.

Sure, we put up with those shitty chalice commercials for a while. And even tolerated the fact that they tried to misspell cider as a clever gimmick. But enough is enough. Go back to Belgium and shit on someone else's tradition. For that, you're officially on the list.

Enough talk. For the fourth year in a row, MnB endorses Makers' Mark as our drink of choice and recommends the following time-honored julep recipe, taught to this blogger by none other than the family behind the bourbon:

It's this: (HT: blogs-images.forbes.com) Oh. And the Derby will try to tell you that a plastic or glass tumbler is acceptible julep carrying material. It isn't, and you suck. 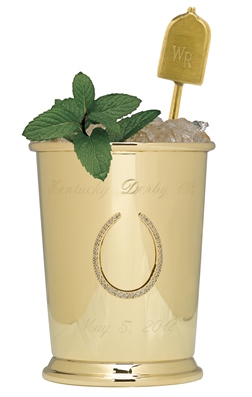 To plagiarize myself from last year's recipe: With the julep, the key is simplicity. Here's all you need to do to become an expert on horse racing:

Put 3-4 mint leaves in the bottom of the cup. Dust with sugar and add two or three ice cubes. Use your hands to grind the ice cubes into the mint leaves and sugar for about 10 seconds (if you're using small ice cubes, just use a spoon to crush them into the mint). Carefully remove the mint leaves. Fill the remainder of the glass 3/4 full with ice.

Now add your bourbon. Fill to just below the top of the ice - if you want to cut it with a bit of water or soda, now's your chance - but don't do that. Juleps were meant to be strong. Maker's is so good because it's nice and sweet, especially with plenty of ice. Don't dilute it. After your liquid's in, stir gently and then dust the top of the drink with powdered sugar and garnish with a sprig of mint. You're done.

By the way, the official MnB Pick for the Derby this year? Tapiture. Put it in the bank, and by that I mean don't count on it. For real Derby coverage, don't forget to check out our friends at And Down The Stretch They Come, because they actually care about horse racing, despite their atrocious green color scheme. Pro tip: try maize and/or blue.

Until next week - where we're going road tripping around the conference - cheers, Michigan Faithful!