In this article, we look at how Minnesota's running attack combines the RBs, QBs, and WRs to attack the whole field.

Minnesota is one of the most run heavy teams not only in the B1G, but in all of college football. And not only are they just heavy in terms of how much they run the football, but they are the true essence of a team that wants to be a powerful running force. The majority of their runs come between the tackles in the form of inside zone, Power O to the RB, or Power O from the QB. With so much power on the field though, they tend to lack the speed to threaten the edges. Their way of getting the football to the edge then, isn't by subbing in different personnel or by running WR screens, but utilizing in a variety of ways their WRs to run sweeps. Not only has this become prevalent in their offense, but they have used it very well to set up other runs as well. In this article, we will look quickly at the Golden Gophers base run game, and more how they work off of that to set up the rest of their playbook.

Power O
The base scheme for the Golden Gophers is the traditional Power O play. But instead of running it mostly from under center, Minnesota will often run it from a pistol or shotgun formation.

They also will run several variations of Power O: One-back Power, Two-back Power, and QB Power, for instance. For each of these plays, the blocking scheme is more or less the same, the difference usually comes in the backfield.

For instance, here's the one-back Power: 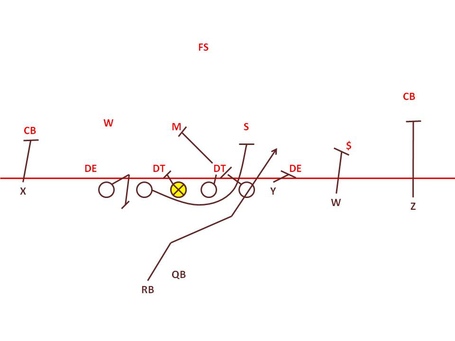 Versus the two-back Power: 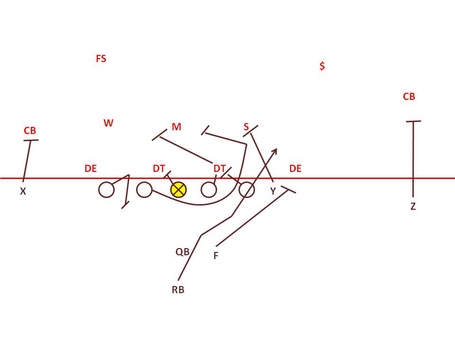 Note that the difference is that in a one-back Power, a on-line TE will be the kick out blocker rather than a RB. Now here they are running a QB power: 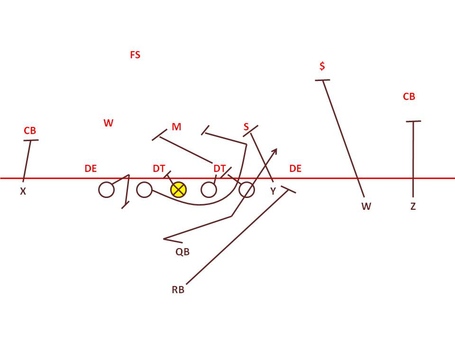 Note how the QB takes an initial counter step. This allows the RB to get in front and act as a lead blocker, and also allows the pulling OG to get to the hole before the QB.

Inside Zone Read
The inside zone is a staple of the Gopher offense. It works well combined with power, but also produces a downhill running attack. In this case, Minnesota typically pairs it with a read for the QB. 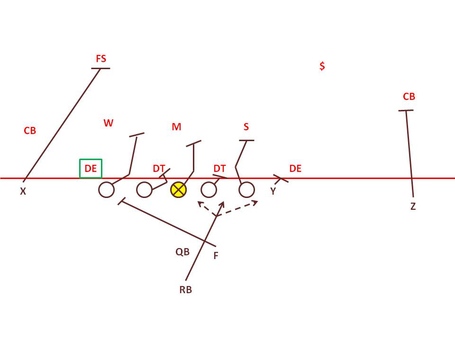 One thing that Minnesota does to take advantage of their mobile QB is to run what looks like a read play, but instead of the FB cutting off the back side, he instead arch blocks to the second level. 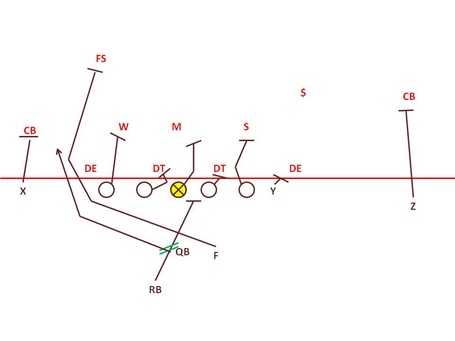 In every way this initially looks like an inside zone. But the backside DE is taught to squeeze down on the inside zone while keeping his containment to prevent the QB from escaping. By the FB taking an angle such that he remains below the backside containment, he is essentially walling off the backside DE who is over committing inside, and sealing the second level inside away from the QB. This is a great way to counter the scrape exchange defense, which sends the DE inside while twisting a LB outside to "exchange for the DE". Now both players are taken out of the play, and that's how Minnesota had a lot of success with this last year.

Jet Sweep
What was evident above is that Minnesota likes to attack between the tackles. To hit the edge with a bit more speed, they bring the WRs in motion and hand the ball off on jet sweeps. 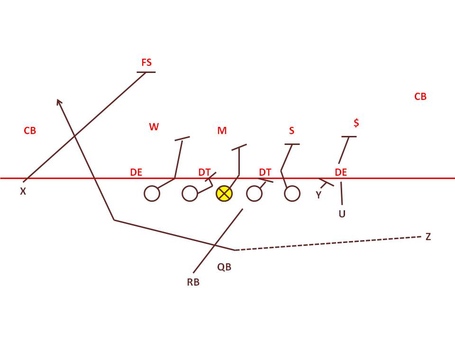 By all accounts, the blocking scheme here is the same as it typically is for an inside zone. The idea is that the WR, already in motion, will be too fast for the DE to contain him inside, allowing the offense to attack the edge. But if Minnesota wants to attack the edge but the DE isn't squeezing or is widening out (or the defense is trying something like a scrape exchange) 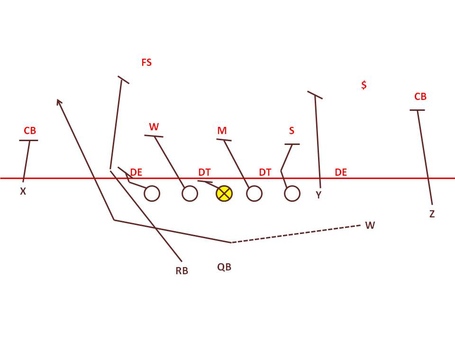 In this case, Minnesota is simply outside zone blocking up front, and lead blocking on the edge with their RB. Minnesota's RBs not only have to be able to tote the ball inside, but must be accomplished blockers as well, knowing how to get good leverage and take proper angles to seal defenders inside or outside, depending on their position and attack angle.

Fake Jet Sweep
As we've seen above, the jet sweep is often paired with another play, either an inside zone or potentially even a counter. In this way, the fake jet sweep can be used to essentially "block" the end man on the line of scrimmage, as that defender will be tasked with containing the sweeping WR. 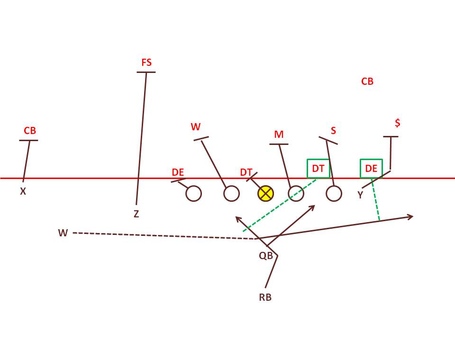 The same can be done theoretically to run Power O, in the form of an inverted veer with jet motion. 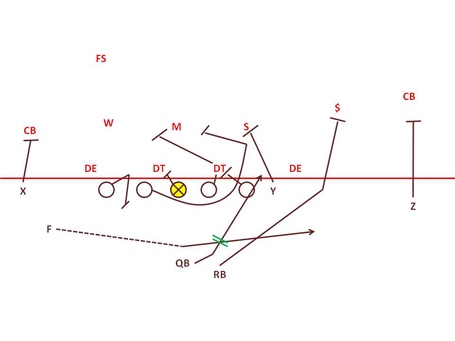 Though this is less common, the theory is similar. And here is a standard RB power with jet sweep motion. Note how the fake hand off to the jet receiver acts as the kick out block in this Power scheme.

And, from the lead sweep play seen above, Minnesota can also run an inverted veer play. While the blocking scheme is different (now a Power O scheme rather than a straight sweep play), this gives a lead blocker to the WR and has the added benefit of an option along with it.

Fake Jet Sweep Pass
And all this does not prevent the Gophers from passing the football. One problem many teams tend to do is over-rely on something like this in the run game without keeping defenses honest. Surely, a receiver is essentially taken out of the pass game other than for a dump off throw, but the defense must commit forward for two or three different run threats and they should be spread horizontally in the short zones.

This opens up things over the top. 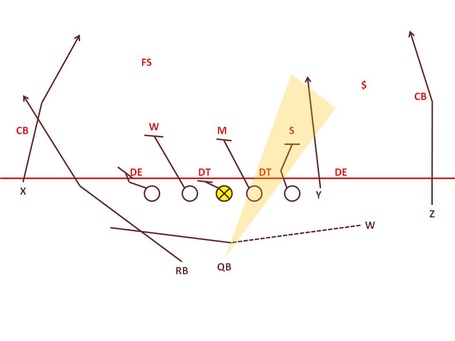 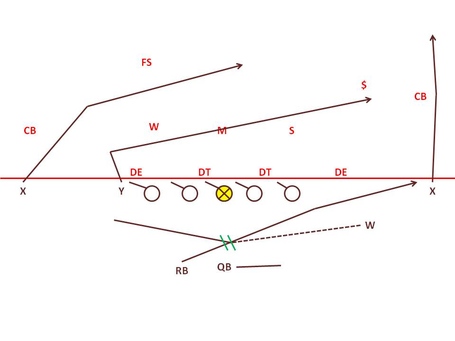 What you see are different routes designed to attack different initial looks, making the WR jet motion no different than a typically PA to a RB would act for outside runs. Combined with the PA from their traditional run game, they can get the defense focused on over-committing vertically, as well as get them rotating from side-to-side, to attack them unexpected through the air, for big chunks.

Conclusion
Nothing Minnesota is doing is extremely complicated or innovative. What is it is a very simple theory that works together to attack defenses between the tackles, on the edge, and deep. There will be few intermediate throws from this team, but this very much simplifies the read for the QB, and forces defenses that are adapted for the heavier run game, to also need to have the speed to cover the whole area of the field. Having many guys carry the football keeps them all fresh, and if your RB is dynamic enough to be a good all-around player, this can prove to be difficult to defend the many options that are presented with similar personnel at all times.