Of course, Michigan football fans want to see those future businessmen, lawyers, counselors and teachers win now--this year, preferably--but seeing them (or reading about them) crossing the stage May 3 at The Big House should deliver some type of comfort: Hoke is making sure his players evolve into well-adjusted adults, not just guys who used to play for the Wolverines.

That'll equal success on the field. It can't not.

Upon entering the Jack Roth Club at Michigan Stadium, my attention quickly focused on the man who's entering his fourth year as head coach in Ann Arbor. I was tempted to walk up and ask questions. But I didn't. Saturday wasn't about his offensive line, his running backs or the number of games he thinks he can win this fall. It was about sending off graduates, and I wasn't about to spoil the party.

Instead, I took a few photos with my phone and watched.

Here's what I came up with: It didn't matter if you played one down or three years for Hoke. Each guy, and his family, was treated as if he had been All-Big Ten--and really, that's probably how Hoke wanted to do it. Sure, Jake Ryan--and people who I assumed were his family and friends--commanded some attention. After all, he's the quarterback of the defense who's set to return from an ACL injury and divide and conquer in 2014--Hoke probably planned on spending some time with those folks.

However, Jordan Paskorz and his entourage were also entertained by Hoke and other coaches/assistants. Paskorz started once at tight end after moving from linebacker and appeared in all of eight games while Ann Arbor.

That didn't matter on Saturday. He was minutes from graduating with a degree in sociology and Hoke couldn't have appeared more proud.

The story was the same for Thomas Rawls, who never held a steady spot in the backfield but was treated like a Doak Walker candidate by Hoke on Graduation Day. That was actually the first thing I saw when I hit the lobby: Hoke embracing Rawls, laughing and bidding a fond farewell to a player who's transferring, degree in-hand, to Central Michigan.

Hoke's actions made one thing abundantly clear: He cares. He genuinely cares. It's easy to lose sight of what matters. Winning matters, and one could cite moments in which Hoke and his players weren't always prepared to take the field.

But Hoke's preparing them for life. That counts, too.

The below photo is of myself and Rawls, who--I won't even lie--was the main reason I went to the ceremony. I've followed his career since he prepped at Flint Northern, and I can't say enough good things about him. He's a testament to what a healthy competitive drive, a dream and resiliency can accomplish.

It made my day to see him, along with guys such as Courtney Avery, reap the rewards of their hard work. 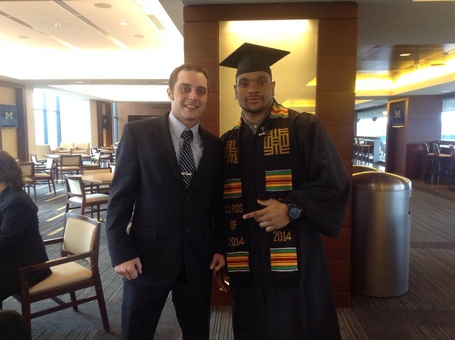