In this post, we look at how Nebraska attacked Michigan's Cover 1 defense last year, and what Michigan needs to do to fix their problems if they want to be able to defend the speed option from Cover 1 this year.

Share All sharing options for: MnB B1G Preview: Inside the Playbook Stops Speed Option with Cover 1

Leaving the offense for a minute, perhaps the most aggravating thing from the Nebraska game was Michigan's inability to defend the speed option. Unfortunately, this has seemed to be a common trend for the Mattison defenses since his arrival back in Ann Arbor. But why? Is Michigan doing something inherently too difficult to accomplish? What are they really asking their defense to do? In this post, we will look at how Michigan has tried to defend the speed option in the past, what went wrong against Nebraska, and how Michigan will look to fix this issue this year.

How the Speed Option is Run
Be it under center or from the shotgun, the speed option is essentially the same. The offensive line, in the case of most modern day offenses, will run their standard outside zone blocking scheme. The one difference is that the offense will bypass the defense's EMOL toward the play and instead work to the 2nd level. The defender left free with be the option defender, the player that the QB will read to determine if he will keep the ball and run it himself or pitch the ball to his RB.

Here is how it looks: 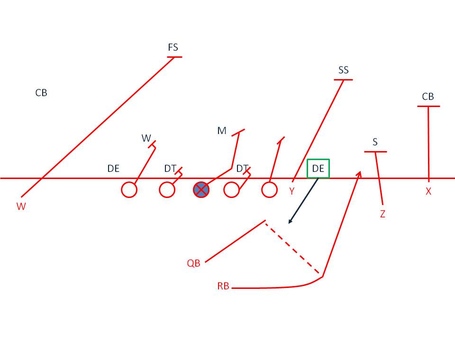 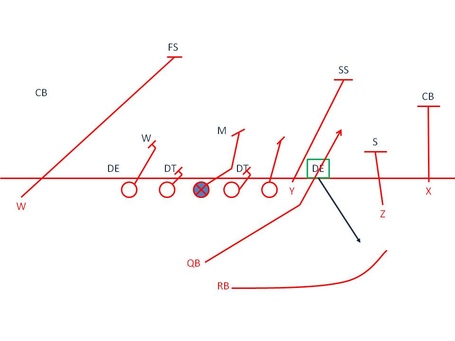 Who Is the Danger?
How the defense plays the speed option will depend on who they believe is the most dangerous player with the ball in their hands. For Northwestern, Michigan thought Colter was more dangerous than their random assortment of backup QBs. Against Nebraska, the highly skilled Ameer Abdullah was the person Michigan didn't want to see the ball go to. How they scouted and prepared show in how they defended the zone against these teams.

Against the spread, there are really three primary defenses teams will play: Cover 1, Cover 3, and Cover 4. We will discuss how Michigan will use these coverages (this post will focus on Cover 1) and how they'll plan to defend the speed option from these coverages.

Defending Speed Option in Cover 1
Michigan went primarily to a cover 1 defense for several reasons against Nebraska: 1) they didn't believe the Nebraska QBs - mostly Armstrong, but also Kellogg - could throw the ball on their defensive backs playing a relatively tight man coverage; 2) this allowed them to commit all but one safety and the remaining man-to-man match ups to Nebraska's run game; 3) it allowed them to run a scheme intended to keep the ball out of Ameer Abdullah's hands on the edge.

Here's how it is intended to look: 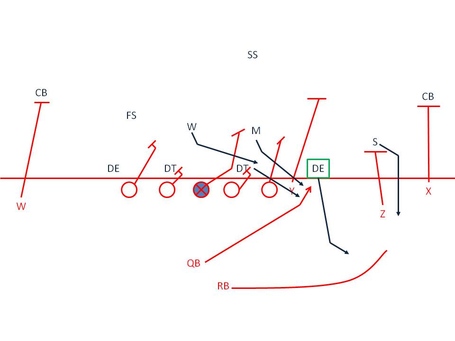 So what's going on here?

Defensive End
The defensive end is tasked with getting up field and keeping some initial relation with the RB. Of course, he can't just mirror the playside shoulder of the RB because that would give the QB a clear and quick lane to cut up field in, before the pursuit could get to him. So the DE will tend to work upfield approximately at the same angle as the pitch relation. You'll hear a wide range of what offensive coaches believe is the proper pitch relation, but it tends to be something about 4 yards deeper than the QB and 2 yards in front of the QB (depending on scheme, formation, it could be 4x4 or 1x4, it really depends).

Once his upfield shoulder gets even with the QB's downfield shoulder, the DE can focus on collapsing down on the QB. That is because by this point, the QB has been forced off his track (he ideally wants to attack right outside the offensive EMOL, but because the DE gains depth, he must flatten out) and to flatten out. This disrupts the proper pitch relationship, and with the DE aiming at the QB's pitch shoulder, any pitch is dangerous and perhaps forced to go through the body of the DE.

This sort of technique also slows the QB down, as he's forced to attack the DE who initially is giving a little bit of space, but is still threatening to crash down. On top of that, the QB is forced to think rather than being able to make a quick, crisp read. All this should allow pursuit to get to the QB.

Slot Defender/Box Safety
The slot defender or box safety will be required to keep everything inside of them. This means that this defender, who is responsible for the alley, must keep his outside shoulder free at all times. That's not exactly extremely difficult in this case, though not exactly easy either.

For a slot defender aligned toward the hash, in Cover 1 he will maintain initial outside leverage (his help is inside, from the LBs). He cannot allow the receiver's initial release to easily cross his face, both for pass coverage reasons and for run support reasons. His off man position allows him to get a good read of the receiver's stem, and lets him judge if the receiver is going into a route or blocking him. Once he sees the QB attacking his side of the field and feels the WR preparing to block, he must shoot upfield and attempt to constrict the alley. This means he cannot gain width and cannot afford to get washed down. He must anchor and hold his position. While the DE is stretching the play horizontally, that combined with the slot defender will constrict any running lanes for the RB (any late pitch to the RB should either put him in a position where the alley defender has outside arm free and support from the sideline, if not that, then any late pitch or pitch relationship that actually allows the RB to get the football will force him to cut back to the pursuing DE along with other pursuing defenders).

As for the box safety, the theory is similar. While he isn't split out as wide (typically the box safety will come up from the boundary) he is in a position to beat blocks to the spot and maintain outside leverage. In this way, it's easier to constrict the alley.

The hard part here, obviously, is maintaining both run and pass responsibility. It is up to properly reading keys to allow this to happen.

Inside LBs
The ILBs in this case are pursuing the play from inside out. Their first responsibility is to make sure the QB can't shoot directly up field to gain yardage. To do so, they must come underneath (upfield) of their blockers. By attempting to go over the top they can easily be washed outside, you combine momentum with the addition of large bodies blocking and it's easy to see how they can easily get sealed outside and allow for a big play to arise from a QB cutting back.

So the LBs must consistently work to get upfield of their block and pursue from through the QB to the RB (after the pitch).

What Went Wrong
Well, it was a bit of everything really. DEs attacked too early or didn't get proper depth, or slot defenders got washed down, or LBs didn't cleanly get underneath their blockers. You also have to give credit where credit is due, the Nebraska QB took whatever luck he had and made some very nice improvisational plays, and, well, Abdullah went all Abdullah. It was a bit of everything. Let's begrudgingly watch some video (thanks in large part to UFR).

Washing the Slot Defender Down - Play 1 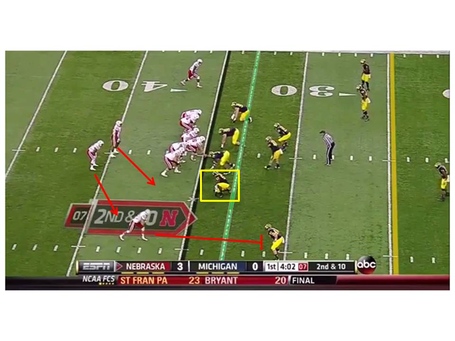 On this play, you see Frank Clark's initial movement away from the QB as he works to keep on that front shoulder of the RB. Notice how his shoulders stay square to the RB and not the QB. 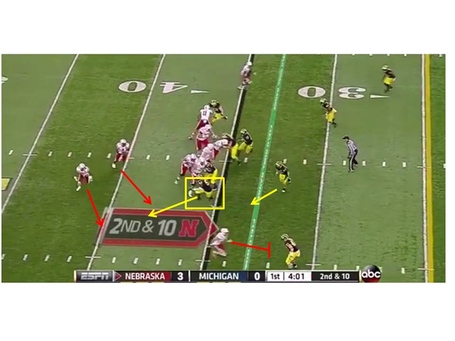 As the QB starts the threaten downfield, however, you see Clark think it's time to commit to the QB. But look at Clark compared to the pitch relation, he is in no way impeding the pitch. 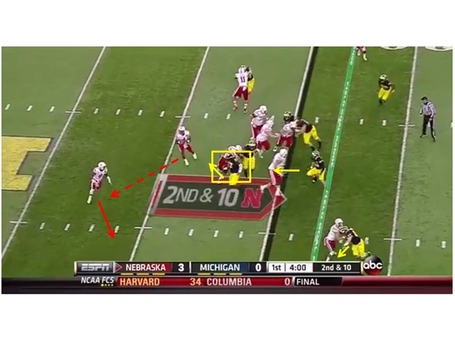 To add to that, you see Ryan doing a good job recognizing the option quickly. He bursts down field and keeps his outside arm free. But he fails to anchor here, and so the WR can continue to wash him down (outside and upfield). 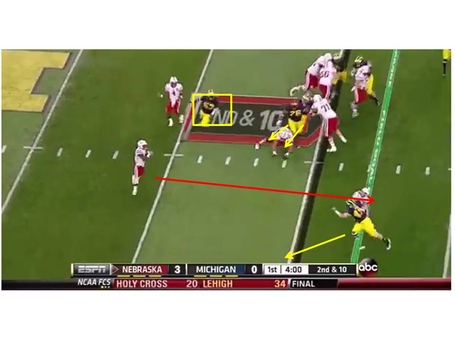 The ILBs, who do a good job maintain relation to the QB's playside shoulder, had the QB perfectly accounted for. And even did a good job here quickly releasing underneath the block without much issue. But in the end, it comes down to Clark allowing too easy of a pitch and Ryan getting washed out of the play.

Committing to the QB Too Early - Play 2 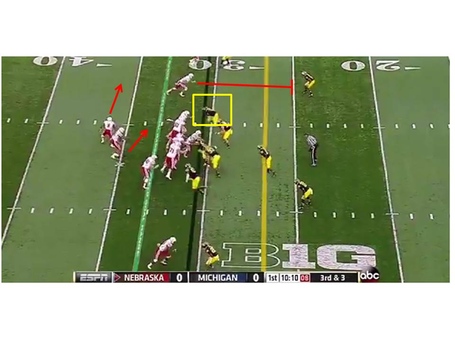 This one is like the worst of all worlds. Gordon is coming hell bent from his SAM LB position looking to take the QB's head off. He begins his path straight up field, but commits immediately to the QB, well before he gets in proper relation with him. 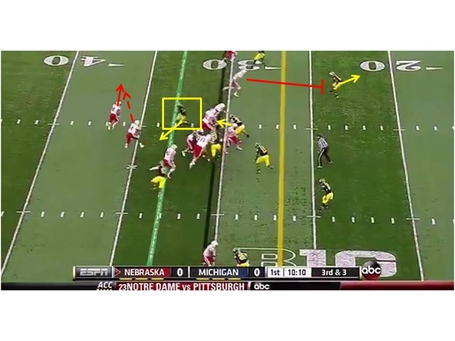 This makes it harder on Countess in the slot as well, who has less time to see the pitch coming and position himself. He's in a tough position here, because the WR is aligned near the numbers, meaning giving up an inside release easily is dangerous, so this makes this difficult for his eyes to recognize the play quickly as well. Still, he doesn't do a great job of it, and then exacerbates the issue by not getting down field and getting driven backwards (though by getting outside leverage he does force the ball to cut back inside). 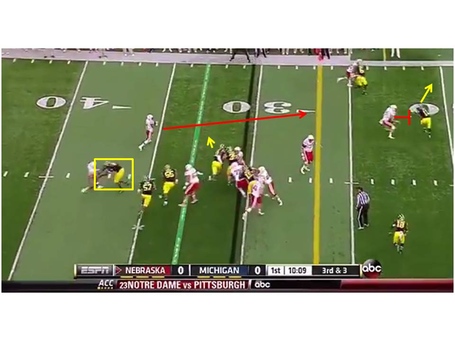 Bolden, meanwhile, works too hard to get upfield, when he could have taken a more direct line to beat the block initially without having to change his path. Still, his initial alignment (I assume he either had some sort of twist or zone blitz on this play) didn't help matters, and releasing underneath was made harder by running into Taco.

Well, That Looked Pretty Good... What the Hell - Play 3 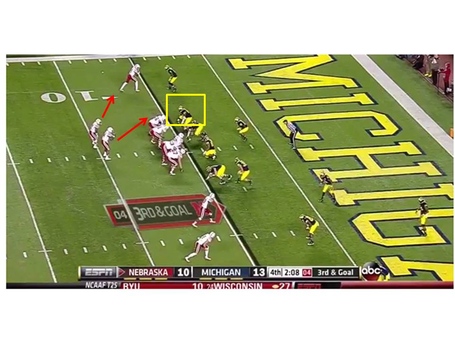 Forewarning, this is a TD play. This is a TD play before the ball is even snapped. Michigan's alignment gave it up immediately as they had no way to adequately account for players to the boundary. But this is why spread teams heavily favor running speed option into the boundary, despite many fans cries to never run it there and always run it to the field.

Nevertheless, Clark's initial path is perfect. He gets upfield quickly, stays in relation to the QB, doesn't square to the QB (a key for any QB to pitch) and is in position to essentially steal any pitch to the RB. This despite there not being a slot defender up there. 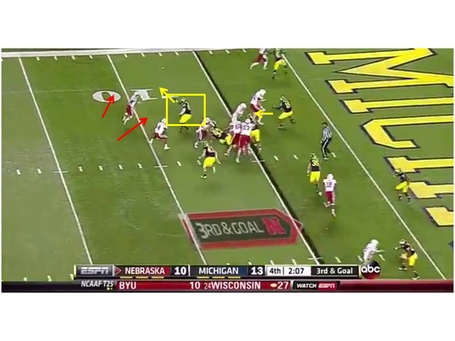 And then he makes a mistake, he doesn't work naturally back to the ball from that position and on that path back to the QB, but instead opens up his body and squares to the QB (the pitch key). 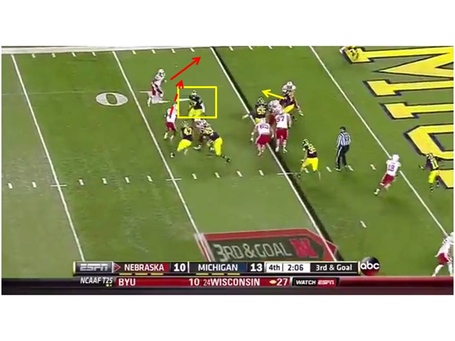 Somehow, Nebraska's QB manages to get this pitch off still once he does so (in quite an amazing feat), but it's that small false step that allows for it. This was almost played absolutely perfectly despite being awfully aligned to defend this. 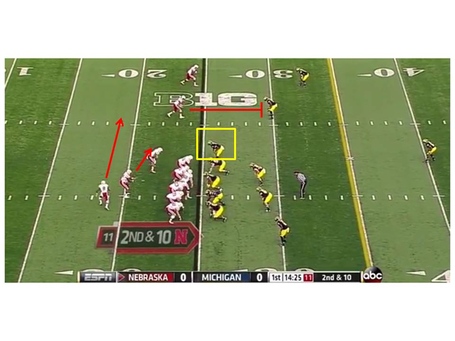 Gordon here gets vertical on the snap. He probably squares up a bit early again by committing his shoulders to the QB, but he has maintained relation with the RB and has begun working in pursuit to the RB as soon as the QB begins to move his arm that way.

Meanwhile, the alley is filled nicely, the WR getting no movement on the slot defender. Even if this ball is pitched the run lane is fairly well constricted.

Bolden and Morgan, meanwhile, both flawlessly get underneath their initial blocks in pursuit. This play ends up getting snuffed from the backside, but it was well run throughout.