It's the Fourth up North!

The Fourth of July in Michigan means everyone gets on 75 and heads up north for the five swimmable days of one of the northern Great Lakes (or their dads take them through some backwoods way up). I am no exception. But what I was really excited about is the breweries just keep popping up - I was in Traverse City and was really pleased to see North Peak's development into a quality brewpub. They've been around for a bit now, but it was good to see.

The real stars of the weekend, though, were the good folks up at at Northport Brewing way up on the Leelanau Peninsula. Northport's been a sleepy little town for years mostly by design, but a new bar/bowling alley and some revitalized interest in the restaurant scene had the town more bustling than I've ever seen it. My neighbor mentioned that a new microbrewery was opening up, and I was intrigued.

We swung by the fledgling brewery on Friday afternoon and were really impressed by the experience. They've got seven-ish beers right now but they're selling out quick (they had sold out of their eighth the day before I went) and are (happily) blowing through their stock. It's a cool little biergarten feel - one bar with some snacks available and a nice pavillion garden with a fireplace. But you're a Maize n Brew reader, so you don't care about ambiance. You really just want some beer and snark. 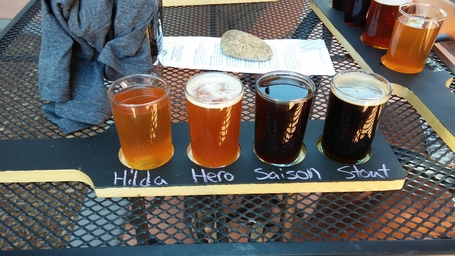 I wanted to try all seven so we got a couple flights and passed 'em around. Highlights were the Fishtown Brown with its hint of ginger finish (something unique for a brown ale, in my experience), the all-around tasty Scotch Hero, and the cherry offerings. I think the cherries are introduced where there's still some active yeast, because both the Hilda/cherry wheat and the cherry saison were much more tart than I expected - in a good way. Most cherry beers come off as too cloying (looking at you, Samuel Adams Cherry Wheat) but these were really refreshing on a summer afternoon.

Pam, Scott, and the crew up at NP Brewing deserve a shout-out - it's clearly a labor of love and I highly recommend a trip up if you're anywhere near the Peninsula.

Until next time, Michigan Faithful... cheers! And your BrewShot of the Week: