In this post, we take a look at OSU's two-back offense, and how it threatens defenses in multiple ways.

Share All sharing options for: Inside the Playbook: Ohio State's Two-Back Offense

In 2013, Ohio State had one of the best run offenses in the nation. Part of their success came from two-back sets, or more accurately, by motioning a slot receiver - their Percy Harvin role - into the backfield. They lost, in my opinion, the best college RB in football last year, but returning the dynamic Braxton Miller and all their Harvinites, two back sets will likely become more prominent in this year's offensive iteration. In this piece, we will look at why these sets are so difficult for defenses to defend, both from a pre-snap standpoint, and after the snap.

Pre-snap Dilemma
The Buckeyes base set will present four vertical threats. Often times, this will be with 11 personnel, with two split ends, a slot, an H-back, and a RB. At times Meyer will deploy more of a true TE look, and involve a flanker and slot or show a trips type set.

Motioning 11 personnel or 10 personnel to 21 or 20 personnel presents a very different look for defenses. Let me explain.

From 11 personnel, the offense has four vertical threats, along with maintaining a horizontal threat and the potential overloading one side of the field. 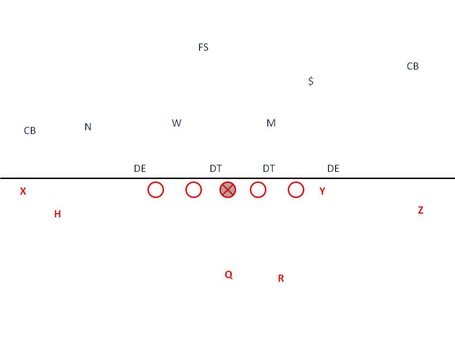 Most likely, in this circumstance, the defense will be forced to utilize a nickel look. On top of that, a cover 3 defense can be exploited in multiple ways, most dangerously, with four verts. So defenses are forced to communicate and make adjustments in order to mitigate the potential dangers these four vertical threats bring to the table. Nick Saban's matchup zone is the product of his Cleveland Browns team's Cover 3 being exploited by four verticals from the Pittsburg Steelers. Mattison adjusts his Cover 3 by having the flat defender (typically the "Backer" or "Buzz" leverage defending LB) align directly over the #2 and carry him deep and "Freeze" against a trips look (align over #2 and read through #3, to put it simply).

But now a slot motions into the backfield on the opposite side of the QB. You're defense has made all their calls, adjustments, and communication, and suddenly they are presenting with a completely different set of threats, especially in the run game. 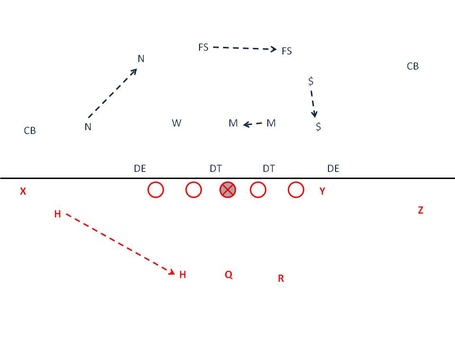 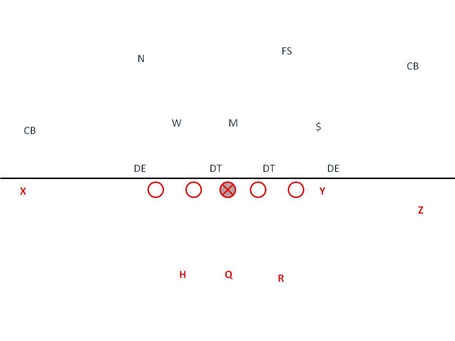 All your old option plays, and wide variety of run situations, now come into play. Your Cover 3 or Cover 4 must now adjust appropriately to a new look. Perhaps you change your leverage call to a nub formation (for example adjust Cover 3 to what I term "Cover 5", which is a three deep coverage with a "cloud" CB leverage perhaps; adjust your Cover 4 to a quarter-quarter-half Cover 6). So it's all new communication and checks that need to be made in a hurry, and all new threats that you have to quickly pop into your mind with the new look. But you have to have personnel that can cover both, and be smart enough to adjust to both looks quickly.

Two-Back Run Game
Now we will simply look at the different run plays that OSU will deploy from a two back set. We'll briefly describe the theory behind each play, and how they work in concert with the whole, but to keep this post somewhat in check, we'll keep it fairly succinct.

The Offensive Tendency
There is some marginal advantage that the defense has against the Buckeye's two-back set. It is almost certain that the initial RB will either run between the tackles or act as a lead back. The motion slot receiver (‘H') will almost certainly be an outside run threat. More often than not, the backs will run in the direction that sees them cross the QB in such a way that they will run opposite of their initial alignment.

Inverted Veer
Power Read
The Power Read, colloquially known as the Inverted veer, is a man blocking scheme that utilizes Power O blocking along with a read. I've previously discussed the two-back inverted veer and how it is intended to work, and other places also discuss and show it in detail 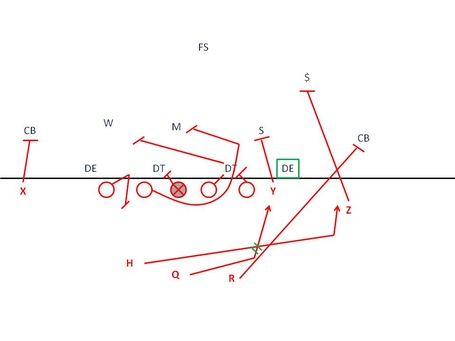 QB Bash
This is similar to the inverted veer, and is a large reason why the colloquially known "Inverted Veer" is not the preferred terminology. Again, the H runs directly across the QB's face. However, instead of a Power blocking scheme in front of the run play, inside zone blocking is used in the direction opposite the H-motion. Typically on an inside zone, a FB of H-back will block the backside pursuit, but in this case, the read blocks that DE. So the RB will bypass the EMOL and look to block the alley defender in case of a give. 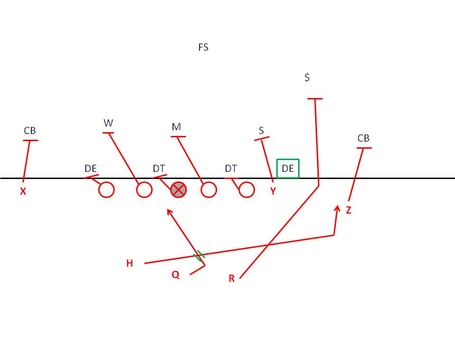 via Eleven Warriors and i.imgur.com

Counter Trey
We're now going back to a man blocking scheme, but this time running a counter trey type blocking scheme. Also run from a single back set with an H-back, it works the same for a two-back set. In this case, the guard opposite the H will pull and kick out the backside DE. Meanwhile, the RB will lead through the hole and act as a lead blocker for the QB in case he keeps. In this case, the QB can still read the playside DE and decide to give if the playside DE crashes. How this works is that the initial QB steps (he slides toward the play) along with the motion of the H make the backfield motion look exactly like the Power Read. 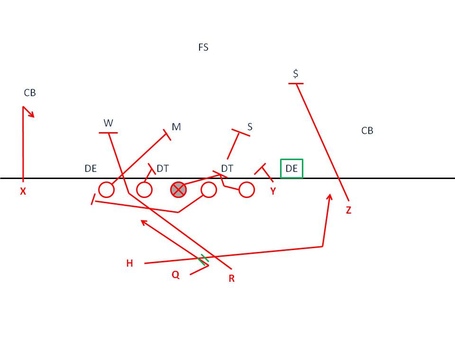 In this way, the backfield can look similar on three different sets of plays, all with the RB threatening outside and playside. Meanwhile, the Power Read threatens inside and playside with the QB, the QB Bash threatens inside and backside (with playside cutback or an outside cut), and the counter trey, which threatens a bit more outside (with an inside cut up field) to the backside. With these three plays, each area of the field horizontally is essentially threatened with just two players and a lead blocker (the addition of a backside bubble screen or package play with a hitch - as seen in the counter trey figure - can fully stretch the field horizontally).

Read Option
We can further utilize the RB as a FB, and continue to threaten the edge. This time, however, OSU's QB will read the backside DE (or, at times, the backside DT) while the OL utilizes an outside zone blocking scheme. This also allows the QB to threaten outside to the backside of the play. The different defender being read and the additional threat causes defenses problems. 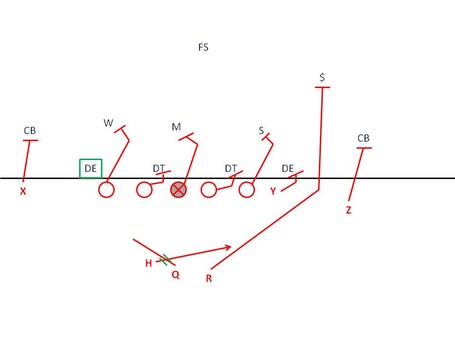 Triple Option
But when you have a RB like Hyde, or the other RB's on the Buckeye's roster, it would be a waste not to also utilize them in the run game. On top of that, it forces the defense to react to one more thing. And on top of that, it works as another counter to the scrap exchange type calls that defenses attempt to run to stop the standard "read" plays. In this case, the OL will block inside zone toward the H initial alignment. The RB will run a standard inside zone read type play, with the QB reading the DE. If the DE stays, the QB gives; if the DE crashes, the QB keeps. If the QB keeps, he then looks to the defender outside the DE and reads him. If that defender crashes to the QB, he pitches to the H; if that defender keeps widening outside, the QB will keep and cut up field. 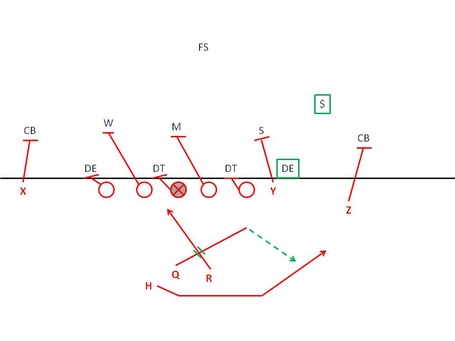 Here's clips of Oregon running the triple option from shotgun.

Sail Route
Now the defense is sucked up to stop the run. They are threatened both ways between the tackles, they are threatened outside in both directions. Also now as a flood concept, the sail pattern provides an easy read for the QB while threatening any type of defense because of the way it overloads a side of the field. With three different levels along the sideline and a route threatening the middle of the field, it can pick up a lot of yards in huge chunks, and immediately threaten the endzone. 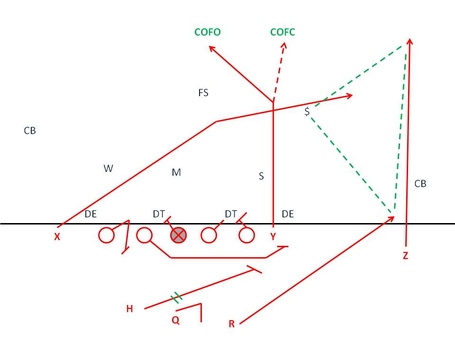 Conclusion
I expect for OSU to run quite a bit of two-back sets this year. It provides Miller with a lot of simpler reads that he is well accustomed to, puts the ball in his hands in key moments, and allows the Buckeye offense to threaten the entire field with their many great playmakers.