Inside the Numbers: When Will Michigan Be Michigan Again, Fergodsakes?

Michigan has not been "Michigan" in nearly a decade. Will 2014 be the year that Michigan begins its ascent back to the top of the college football pyramid? The Maize n Brew debut of "Inside the Numbers" dives in.

Share All sharing options for: Inside the Numbers: When Will Michigan Be Michigan Again, Fergodsakes?

EDITOR'S NOTE: This is Drew Hallett's first stat-based column with MnB. Please help me welcome Drew to the site.

These were the words vocalized and emphasized by Brady Hoke at his introductory press conference in January 2011 when he was formally announced as Michigan's new head football coach. These words resonated with a Michigan fan base that had just endured an excruciatingly painful three-year experiment with Rich Rodriguez. They were a reminder that Michigan's prestigious, tradition-rich program has the most wins all-time in college football (910) and the most Big Ten championships (42). And they became Michigan's mantra, repeated endlessly by coaches, players, athletic department marketing campaigns, and fans alike, to signal to the rest of the country that Michigan still has an elite football program.

There was a time when this was true, when the sight of maize-and-blue, winged helmets on the football field intimidated opponents and Michigan expected to emerge from every game victorious. There was Fielding H. Yost's "Point-A-Minute" dynasty. There was the "Benny-to-Bennie Connection." There were the Mad Magicians. There was the historic Ten-Year War, during which Michigan was 5-4-1 vs. Ohio State, was 91-11-2 vs. non-Ohio State schools, clinched a share of eight Big Ten championships, and appeared in five Rose Bowls. There was the period from 1985 to 1992 when Michigan owned a 76-16-5 record, lost to Ohio State only once, won six Big Ten titles including five in a row, and finished in the top 10 in the final polls seven times.

And then there was the first decade of Lloyd Carr's tenure from 1995 to 2004, which was quite impressive, too. Michigan may have had its share of four-loss seasons, which caused some angst among the fan base, but Carr's Wolverines still won five conference titles and their first national championship in nearly 50 years. As the chart below indicates, during this span, Michigan and Ohio State were the two best teams in the Big Ten by a considerable margin, with the Wolverines and Buckeyes each winning about 77 percent of their games and no other Big Ten school winning more than 64 percent. 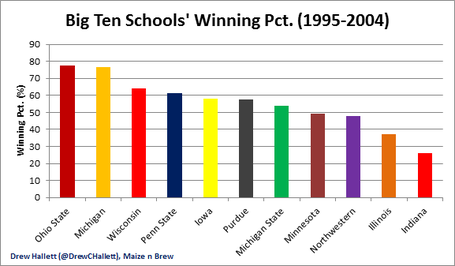 This was the norm for Michigan. Essentially every year for decades, the Wolverines would win no fewer than nine games and battle the Buckeyes for Big Ten titles, Rose Bowl berths, and national championships. Any season that did not have this outcome was considered a deviation or an outlier. It was tossed away as an anomaly. There was no concern that the Wolverines may lose their place among the nation's elite because next season would guarantee a return to their winning ways. This was the expectation.

It is an absolutely gut-wrenching list. And it all has happened in the past decade. Most importantly, though, the Wolverines are not losing only in puzzling and often heartbreaking fashion. They are just losing in general. And they are losing more than they have in quite some time. In the past nine seasons, Michigan has been victorious 68 times in 114 games played. This is a win percentage of 59.65 percent. The last time Michigan had a nine-year stretch during which it had a win percentage this low? 1961 to 1969 when Michigan won only 57.95 percent of its contests. Yes, this undoubtedly has been the worst stretch of football Michigan has played in the past half-century.

It should be no surprise then that Michigan has failed in its quest for a Big Ten championship each of the past nine seasons. There were a few years when Michigan was on the precipice of ending this drought. If the Wolverines had beaten Ohio State in 2006 or 2007, Michigan State in 2011, or Nebraska in 2012, this column likely never would have been written. But, alas, Michigan did not, and here we are.

The real problem, though, is that the Wolverines have slid from being one of the two best teams in the Big Ten to the middle of the pack. Warning: the following chart may induce vomiting, eye-gouging, and uncontrollable fits of weeping for Michigan fans. 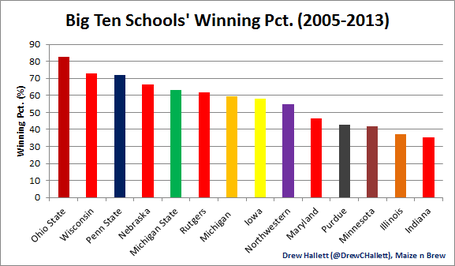 Yes, this chart is accurate. No, your eyes are not trying to trick you. What you see is just how far Michigan has fallen in the Big Ten and college football ranks. We could focus on the fact that, in the past nine seasons, Ohio State has won over 80 percent of its games while Michigan has failed to win 60 percent. We could focus on the fact that Wisconsin, Penn State, Nebraska, and Michigan State all have better records than Michigan since 2004. Or we can focus on the fact that Rutgers--yes, the same Rutgers whose best season ever ended with an appearance in the Texas Bowl--owns more victories than Michigan in this span. No, it does not matter that Rutgers was in the Big East or AAC and faced weaker competition during this time. We are talking about Rutgers!

Hoke can continue to stand at the podium and pound away that Michigan still has an elite football program. However, the truth is that this claim no longer is accurate. At least not at this moment or for the past decade. Michigan may have the prestige, tradition, resources, facilities, and fan base to be elite, but the requisite on-the-field results are nowhere to be found. Only two seasons with a minimum of nine regular-season wins in the past nine years? This is not the mark of one of the best college football programs in the country.

So how much longer will fans need to wait before Michigan is Michigan again? How much longer will Michigan be mired in mediocrity? Is Hoke the coach that can pull Michigan out of its funk? According to multiple members of the national media, Hoke needs to do it this season or else he may find himself without a job. I disagree. Hoke's seat may be a bit toasty, but Michigan will retain him unless this fall is an utter catastrophe and Michigan fails to be bowl-eligible. The good news for Hoke and Michigan, though, is that none of this should matter by season's end.

The Wolverines should begin their return to national prominence in 2014. Hoke's roster finally is stocked with his heralded recruits. The members of his 2012 and 2013 recruiting classes, which were ranked the sixth- and fourth-best in the nation, respectively, by 247 Sports, have been in the program for at least one year. Plus, there is this incoming freshman named Jabrill Peppers that is supposed to be okay. I think you may have heard of him or seen his highlights. For the first time during Hoke's tenure, the Wolverines have talent and depth at every position--except, you know, the big one up front. The defense has the potential to be one of the, if not the, best in the Big Ten. If the offensive line can come together and be just an average unit, a nine- or 10-win season could be in the works for a Michigan team that plays a relatively light schedule, despite traveling to South Bend, East Lansing, and Columbus in the same season for the first time in program history.

This does not mean fans should expect the Wolverines to go all gangbusters and capture a Big Ten championship in 2014. Is it possible? Sure. But unlikely. Nonetheless, Michigan should still take a big step in the right direction. Progress should be noticeable and provide a stepping stone for Michigan to launch off of in 2015. In 2015, everything--talent, depth, and schedule--should be in perfect alignment for what could be a magical season that propels the Wolverines back to the top of college football. It should be in 2015 when Michigan expects to beat every opponent it faces once again. It should be then when Michigan becomes the Michigan to which Hoke always refers.

However, Michigan must improve in 2014 first. If Michigan remains stagnant or, worse, falls flat on its face, it would be another disappointing season in what has been a dismal decade for Michigan football. It would be further evidence that Michigan is not elite anymore. No longer would fans expect Michigan to bounce back and ascend to the top any time soon as they did for decades and decades. Instead, they would begin to wonder...