What We Learned: Michigan vs Appalachian State

Michigan opened the season in impressive fashion, dominating ASU in all facets of the game. What did we learn about the team going forward?

Share All sharing options for: What We Learned: Michigan vs Appalachian State

Defensive coordinator Greg Mattison and offensive coordinator Doug Nussmeier have talked big games this off-season, and it looks like both are prepared to back every last word. Mattison has been preaching aggressiveness and soundness since the spring, and boy, did the defense look aggressive and sound. Corners are standing within three yards of receivers, strong safeties are walking up into the box, and linebackers aren't even trying to hide the fact that they're about to come after you in the backfield. The best part was the effectiveness of the scheme, which overwhelmed Appalachian State in every way and looks plenty capable of giving better opponents all they can handle.

On the other side, Nussmeier came out with a game plan that put his most explosive players in positions to make plays – which is all he's been talking about since he was brought on. Devin Funchess caught three touchdown passes on well-designed routes, Dennis Norfleet had three catches, and success through the air was used to set up 285 yards of rushing between Derrick Green and DeVeon Smith. It's early, but Doug Nussmeier looks primed to turn an inconsistent offense around in remarkably quick time.

It took time, but the running game eventually opened up for Derrick Green and DeVeon Smith. Michigan found its groove against an undersized ASU front after a few early attempts that were reminiscent of 2013, gashing the Mountaineers to the right behind solid blocking from Kyle Kalis and Ben Braden – the two beasts who were expected to be Michigan's best run blockers.

The running backs looked more mature, too. Derrick Green looks much quicker and capable of making defenses pay; but he isn't breaking tackles like running mate DeVeon Smith, who was still too slow to break multiple runs through the secondary after bursting past the line of scrimmage. Both are running with less wasted motion and should give Michigan a great combination for the remainder of the season.

Remember the 2013 opener? Gardner was hyped all off-season, only to come out and throw an interception and look shaky on more than one occasion against Central Michigan, and the pattern continued. That wasn't the case this week, as Gardner only missed one throw – a dig route to Funchess that he was a half-second late on – and didn't throw a single interception. His only remotely questionable throw came on a deep comeback throw to Amara Darboh, which was nearly broken on by the corner. You're in fantastic shape if your only questionable throw is an NFL-length curl throw on a rope.

Funchess came out donning the legendary #1 jersey, and expectations went from high to higher. He met those expectations and then some, catching three touchdown passes of increasing difficulty and nearly breaking his first catch for another. His first score came on an unfair double move and easy toss. The second came after a crossing pattern found him wide open, turning to stiff-arm a defender into the turf before waltzing into the end zone. And the third touchdown, man. That third touchdown. 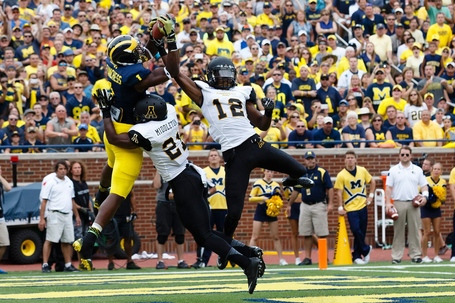 Defensive tackles, all three linebackers, corners, nickels and safeties all rotated with alarming efficiency in this game. Sure, it's Appalachian State, but Michigan was running its second team defense after it ran away with the game, and they still looked like a starting unit for much of the time they were on the field. Michigan has enough depth to cope with the bumps and bruises of a Big Ten season at every position but defensive end, and even Taco Charlton had a sack. Things look very good on this side of the ball.

The only real question mark on the defense was new MIKE Jake Ryan, who looked a bit lost on more than one ASU zone rush. Will he be able to make strides between now and next weekend? We'll see. We do know that the defense is going to put him in a position to get to the quarterback, which he's already a monster at, so all he needs to do is improve on his mistakes.

This one goes to Michigan by default, as Michigan gashed the Mountaineers with its inside zone more than once. I don't recall Fernandez being overly problematic, so we'll chalk it up as a win for Miller.

Michigan by a long shot. Appalachian State brought Gardner down a grand total of one time, and the Wolverines eventually found their groove on the ground after establishing the passing game.

Michigan, again. Frank Clark looked the part for much of the game, blasting ASU's starting left tackle on the opening play of the game; the rest of the defensive line stood its ground for the vast majority of the game.

The new Devin Gardner takes this one. Three touchdowns, no picks, one incomplete attempt. Enough said. 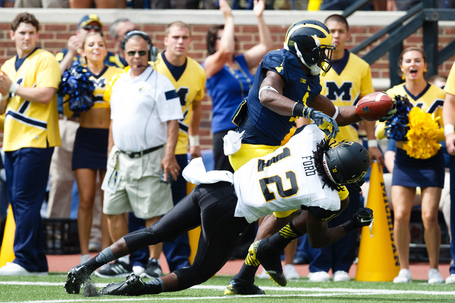 6. ESPN vs The Horror replays

This actually didn't go nearly as poorly as planned. ESPN went long stretches without so much as mentioning The Horror, which was smart considering the Michigan fan base outnumbers ASU's roughly ten thousand to one. ESPN wins.

Michigan looked good, but you come into games like this looking for what the team did wrong. Any hint of weakness against a completely overwhelmed opponent will almost certainly lead to a true weakness that needs addressing during the course of the season. Luckily, Michigan showed very few hints of weakness.

The offense is going to improve. Devin Gardner looks a bit wiser, but we can't say that with much confidence because he was throwing to wide open receivers nearly the entire time he was on the field. Mason Cole and the offensive line should be serviceable but not great against Notre Dame; whether or not they're capable of producing the occasional gashing run against that kind of front remains to be seen, but at least we know they're going to perform against low-end competition. The receiving core is really, really good, and the running backs are just about what we expected, if not a touch more.

Defensively, this game only solidified my belief that this is going to be one of the best units in the country. Jake Ryan needs more time to familiarize himself with the position, but I fully expect Mattison to let him run on blitzes until he's more comfortable in practice. That's not that risky of a proposition when you've got the kind of depth Michigan has on the back seven.

Overall, the game against Appalachian State showed that Michigan's floor is a bit higher than we originally thought. They have the potential to contend for a Big Ten conference that belongs to Michigan State at the moment.