Michigan put together three pretty good quarters against Miami (OH), but fell apart spectacularly in the second quarter. What did Michigan do to lead to all of this? We take a look.

Share All sharing options for: Michigan 34 - Miami (OH) 10: Examining Michigan's Three Pretty Good Quarters, As Well As The Bad One

1. The Second Quarter Blues.  Michigan's 34-10 win against Miami (OH) failed to satisfy many, and a big part of that has to do with the Wolverines' crap-tastic second quarter.  Behold: 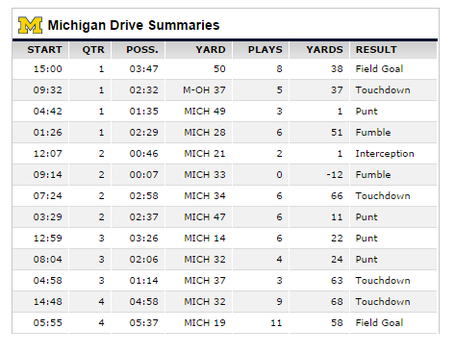 Michigan's first three second quarter possessions ended with turnovers, including an interception (a high pass that was tipped by the DL than the WR), a fumble after a catch and run down the field, and a special teams mixup.

The good news: three quick (somewhat fluky) turnovers in succession offer good insight into why the score is lower for the home team than expected.  Most of the day Michigan moved the ball with ease against a Miami defense that wasn't physical and athletic enough to force the kinds of mistakes to push Michigan off the field the old fashioned way (punts).  But for two drives, Michigan's tendency to let negative events build on each other was in full effect.

It wasn't all sunshine outside of the second quarter, as Michigan's offense sputtered to start the third quarter, and only really gained its balance once the fourth quarter had begun.  Most of the game Michigan's offense was good enough to stay productive.  However, this team's habit of spontaneous combustion offensively is becoming maddening.  Michigan is too talented to be plagued not just by turnovers, but by long strings of misfortune caused by mental errors all over the field.

2. Derrick Green: Feature Back.  The Michigan run game got off to a bit of a slow start Saturday, but by the end of the game Michigan was nearing 300 yards on the ground with a team YPC better than six.  The lion's share of this work went to starter Derrick Green, and if his performance in this game is any indication, he could keep a hold on the top job for a while.  Green bounced back from a Notre Dame game in which he looked downright bad for most of the night, missing holes and cutting back into defenders.  Against Miami, Green was much more deliberate in his cuts, and more focused on running north-south.  Level of competition disclaimers apply (it is easier to do all this vs. Miami's linebackers than it is Jaylon Smith), but it was the kind of improvement that bodes well for the future.  If Green can continue to get comfortable running the ball and making all the reads in the running game, he is capable of being a solid running back.

The best news: Green did not rush for negative yardage once all day.  All 137 of his yards were positive.  It has been a while since a Michigan running back has been able to say that.

3. Lights Out.  With everyone hand-wringing over the offense and its woes, the defense hasn't been given as much credit as it probably deserves this season.  Even last week's Notre Dame game was an overall positive day for the front seven that was ruined by some coverage breakdowns.  Michigan still has yet to give up more than 280 yards of offense to an opposing team, and it is doing that despite a low number of negative yardage plays.

The Miami game was no different.  The Redhawks were held under 200 yards of total offense in the game and held to just 47 yards on 23 carries (sacks removed).  Miami was forced into five three-and-outs and three more drives that ended in punts after covering less than 25 yards.  The longest drive of the day was a scant 43 yarder in the fourth quarter that ended as a turnover on downs.

In fact, the only beef with the defense is that it couldn't hold up when handed quick turnarounds because of turnovers by Michigan's offense.  The first Michigan fumble was followed by a three-and-out forced by the defense.  Two offensive plays later, Michigan would give the ball back to Miami on the Michigan 35 yard line, which would end up being a field goal.  Michigan's defense didn't even really get a break after that, as the kickoff return team fumbled the ball and Miami recovered at the Michigan 21 yard line.

Michigan's offense/special teams turned the ball over three times so quickly that the defense was off the field for just three plays, and it was backed up in the shadow of its own end zone twice.

Yes, ten points allowed (especially in the second quarter) is bad.  However, given the circumstances, it is hard to blame the defense too much.

4. It has taken a couple games, but Amara Darboh has started to make a name for himself.  Last year's fall camp standout was set back significantly when a foot injury forced him to miss all of the 2013 season and limited him in the spring.  The first two games of this season he hasn't been much involved, but with Devin Funchess sitting, it was Darboh who got the most looks early on.

His touchdown catch was impressive, finding a way to keep upright after the tackle attempt and having the presence of mind to reach across the goal line for the score.  Past that, he did a good job working through coverage and finding open spots for Gardner to get him the ball.  The fumble was bad, but as long as it is something he learns from there is no reason for concern there just yet.  Darboh doesn't look to be a game-changing deep threat, but he is strong and savvy.  Devin Gardner can get a lot of use out of that this year.

5. I used to think this was just a Borges thing, but now it seems to be more of a Brady Hoke issue.

Michigan seemingly has two different offenses.  The one it pulls out for games like this it knows it should win, and the one it reverts to against teams like Notre Dame.  Michigan spent just a fraction of its time against Notre Dame in under-center formations.  Most of the game was shotgun three-wide formations with an H-back moving all over the field.  Last Saturday against Miami, Michigan stayed almost entirely in under center I-formations.

Michigan wants to be an under-center, power football team because Brady Hoke wants that.  I get it.  What I don't get is how a coaching staff can justify running that much under center offense when it will be almost entirely shelved in games that matter.  Work on the stuff you're going to use the most.  Let the team get comfortable running these zone plays from shotgun.  Don't spend all week working on I-form power football just to put that on the shelf next week when Utah comes to town.

6. Michigan quietly got Jabrill Peppers back.  I say quietly because no one really talked about it until he was already on the field and it was like "oh, and there is Jabrill Peppers".  A friend of mine who was at the game didn't notice Peppers for and entire series.

Miami noticed Peppers, and it went at him early.  Whether this was to avoid Jourdan Lewis — who's early INT was made easy by near perfect coverage down the sidelines — or try and catch the young phenom in a mistake is hard to tell.  What was easy to see is the skills that made Peppers so highly recruited.  He was big and physical enough to pla up on the line, and he had the speed and athleticism to recover quickly.  The things that Blake Countess struggles with are those that come easy to the young Peppers.  Michigan's coverage looked much better when it was able to rely on Peppers and Lewis.  If Raymon Taylor can get well soon, Michigan will once again have enough bullets in the chamber to try to press teams to death.

7. Frank Clark has yet to register a sack and has only two tackles for loss this season.  However, watching him play defensive end in this defense, one can't help but believe it is only a matter of time before he blows up.  Michigan's pass rush has been largely neutralized against quick passing offenses as of late, and the lack of real tight press coverage to delay timing routes has hurt the DL most of all by shortening the pressure window.  But time and time again Frank Clark is just one step away.  As Michigan's secondary gets into the groove pressing opposing receivers, Clark will get more chances to take down the quarterback.

8. I like Big Butt and I cannot lie.  Jake Butt is back, and in a big way.  If anyone had any questions about whether Jake would pick up where he left off last year, those were quickly put to rest.  His first catch of the day was him simply taking the ball away from a smaller corner with much better position on the pass.  Butt shook off the defender and turned the play upfield for a few more yards.  A couple plays later he faked a block and released downfield for an easy touchdown.

Jake Butt is an important weapon in this offense.  Not just because of his physical ability as a receiver, but also the possibilities that he presents to a defense.  His touchdown reception in the third quarter is a perfect example.  Michigan showed a quick hitch to the flat with Butt as a blocker, but then released him deep for an easy score as the defense bit on the underneath route.  Jake Butt gives the offense a lot of different options, which strains what a defense is able to cover.

9. The critics are out in full force (it didn't take long), but I would like to say this: I though Devin Gardner played a pretty good game.

Now, he was far from perfect.  He missed a few throws (like the deep pass to Chesson that was overthrown) and didn't deal with pressure well at points, but his single interception was much more a confluence of events than him simply screwing up spectacularly (high throw, tipped pass, secondary defender perfectly aligned behind the play).  Most of the day he did a good job finding open receivers, and Michigan did well using Gardner's legs to pick up easy first downs and punish the defense.  Michigan got what it needed from its fifth year senior.

10. Next week's game looks to be a much bigger challenge.  Utah is coming off a bye week and back to back 50 point days against bad teams.  Three wins in the non-conference was an expected outcome before the season.  Splitting things 2-2 will make for a very uncomfortable lead in to the Big Ten schedule for everyone involved.

Let's not do that, mmkay?