Michigan had a pretty good game against Minnesota on the defensive side of the ball, but if there was one area in which Michigan struggled, it was taking care of business against play action and misdirection. Michigan was caught playing too fast downhill on a number of screens, and flatfooted on a few play action passes. Minnesota's first drive included two plays back to back that Michigan failed on. Both are passes to the flat intended for the fullback, and both situations see that fullback get open as a Michigan defender gets caught with his eyes in the backfield for too long.

First play is a fourth and three. Minnesota has just taken a timeout and motions players around only to bring the fullback across the formation after the snap, away from the play action. Jarrod Wilson is the EMOLS and should pick up the fullback out of the backfield. Issue is, that fullback is in a full sprint toward the sidelines and Wilson is still square to the quarterback watching the play action develop. 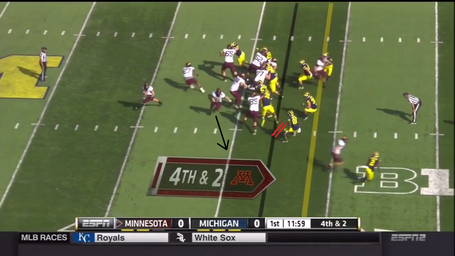 Minnesota's FB gets open and Leidner tosses him the ball for an easy first down.

On the very next play, Minnesota goes back to the well, only this time sending the FB on play action to the side the run action is already going. This time it is Jake Ryan caught standing. 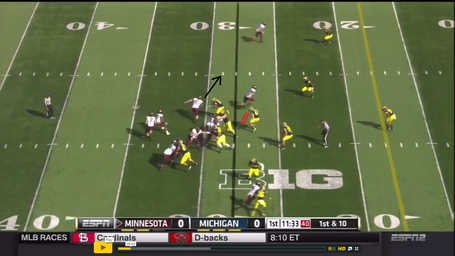 Fortunately for Michigan, the fullback can't reel the pass in. Had he caught it there was at least enough space for him to get a first down. A block or two downfield could have meant six points.

The beauty of Minnesota's passing game is that it is predicated on making life hard on guys who have to make decisions quickly. Play action of this sort plays a linebacker or safety's natural instinct to run fill against him by creating that moment of hesitation that gets a receiver open on a quick route. These plays are well conceived, well timed, and for the most part well executed. Michigan would deal with this all day long.