Inside the Numbers: The Battle for College Football's Best All-Time Win Percentage

For years, Michigan and Notre Dame have battled for ownership of college football's highest all-time win percentage. The margin has never been closer than it is now. With the Wolverines and Fighting Irish clashing for the final time in the foreseeable future this Saturday, "Inside the Numbers" breaks down exactly what is at stake.

Share All sharing options for: Inside the Numbers: The Battle for College Football's Best All-Time Win Percentage

As you most likely are well aware, this Saturday will be the last meeting between Michigan and Notre Dame for the foreseeable future. The Wolverines and the Fighting Irish have clashed on a near-annual basis since 1977 and, after an announcement of an extension in 2007, were expected to continue to do so until 2031. However, there was a clause in the contract that allowed either school to opt out of the series with three years' notice, and, when Notre Dame announced in mid-September 2012 that it was aligning with the ACC and its football program would be required to play five ACC opponents each season, the days remaining in the Michigan-Notre Dame annual series appeared to be numbered.

Lo and behold, only two weeks later, about an hour prior to the 2012 matchup between the Wolverines and the Fighting Irish, Notre Dame athletic director Jack Swarbrick handed Michigan athletic director Dave Brandon a letter, informing Brandon that Notre Dame essentially was canceling the series after the 2014 season. Initially, there was some hope among the Michigan fan base that the two schools would be able to resume the rivalry quickly. But, with recent news that the Big Ten will add a ninth conference game beginning in 2016 and Michigan has scheduled other marquee non-conference opponents for almost every year through 2026, this will be much longer than just a short recess. Instead, it seems Michigan and Notre Dame will not square off on the gridiron for at least the next 15 years.

It is the end of a rivalry. For now. And it saddens me.

The Michigan-Notre Dame rivalry has been one of the most competitive and exhilarating rivalries in recent memory. Since the rivalry resumed in 1978 after a 35-year hiatus, the Wolverines and Irish have faced off 30 times. In that span, Michigan holds the slightest of advantages, owning a 15-14-1 record against the Irish. And the finishes in these games have been nothing short of spectacular. From 1979 to 1988, four of the eight games played were decided on field-goal attempts in the waning seconds. In 1989, Rocket Ismail returned back-to-back kickoff returns for touchdowns in the second half to seal an Irish victory. In 1991, Desmond Howard had "The Catch." In 1994, Remy Hamilton became a hero. In 2002, John Navarre almost became one. And, from 2009 to 2011, Michigan stunned the Irish with a game-winning touchdown with fewer than 30 seconds remaining each time. College football fans pointed towards Michigan-Notre Dame on the non-conference slate and knew they were in for one heck of a show.

But what makes (or made, as I should say now) this rivalry so special is that Michigan and Notre Dame are two of the nation's most historical college football powers. Through the decades, very few college football programs have enjoyed the type of success that the Wolverines and the Fighting Irish have. Both claim 11 national championships, which are tied for the fourth-most all-time and the second-most in the 20th century and beyond. Both have multiple Heisman Trophy winners, as Notre Dame shares the top spot on the list with seven recipients while Michigan is tied for fifth with three honorees.

And both win games. Lots of them.

Most college football fans know that Michigan has the most all-time wins in college football with 911, while Notre Dame (875 wins) bounces between second and third place with Texas (876 wins). While many Michigan supporters, myself included, are proud of this feat, it is a flawed measure of the Wolverines' success on the football field. Michigan benefits from having the sixth-oldest college football program in the country at 135 years--younger than only Princeton, Rutgers, Yale, Harvard, and Pennsylvania. The older a program is, the more games that it has played. The more games that have been played, the more opportunities a program has had to accumulate victories. This is why total all-time wins is not the truest method of determining which college football program has been the most successful.

That method would be all-time win percentage. 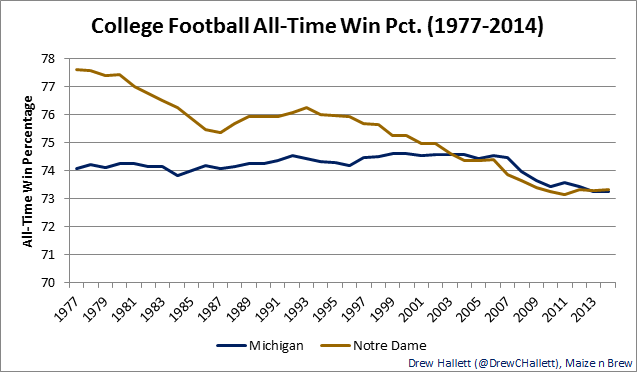 It has not always been this way, though. For the longest time, there was a large gap between Notre Dame and Michigan with regards to their all-time win percentage. When the two programs resumed their rivalry in 1978, the Fighting Irish had won 77.61 percent of their games, while the Wolverines had won 74.09 percent of theirs. This was a difference of more than three percentage points, which was significant given that both schools already had played a minimum of 786 contests all-time. With that number of games under each program's belt, any shift in their all-time win percentage would be gradual. Thus, if Michigan was to contest Notre Dame for the best all-time win percentage, it would need years, even decades, to do so.

And that is exactly what happened. Over the course of the next quarter-century, Michigan slowly but surely closed the gap. Yet it was not because Michigan started winning a higher percentage of its contests. The Wolverines' all-time win percentage was relatively constant from 1978 to 2007, holding steady between 73.84 and 74.62 percent. It was because Notre Dame could not maintain its previous rate of success. After enduring the Gerry Faust (1981-85), Bob Davie (1997-2001), and Tyrone Willingham (2002-04) eras, during which the Fighting Irish had 10 seasons with seven or fewer wins, Notre Dame's all-time win percentage plummeted. So much so, in fact, that, by the end of the 2004 season, Michigan's all-time win percentage (74.59 pct.) had surpassed Notre Dame's (74.35 pct.) for No. 1 on the list.

Michigan would hold onto the top spot for almost an entire decade after 2004. Notre Dame's all-time win percentage continued to slip after another disastrous coaching hire in Charlie Weis, which provided Michigan an opportunity to increase its lead if it could maintain its percentage like it had the previous three decades. But the Rich Rodriguez era began, and, in just three short years, Michigan's all-time win percentage had dropped a full point from 74.48 percent at the end of 2007 to 73.45 percent at the end of 2010.

The Wolverines held onto their lead for as long as they could, but current Notre Dame head coach Brian Kelly has had more success stabilizing the Fighting Irish than current Michigan head coach Brady Hoke has had with his program. At least in terms of win-loss record. During the 2012 and 2013 seasons, Notre Dame posted a 21-5 record (80.77 pct.), while Michigan earned a 15-11 record (57.69 pct.). This was enough for the Fighting Irish to reclaim college football's best all-time win percentage during the bowl season last year, when Notre Dame defeated Rutgers in the New Era Pinstripe Bowl and Michigan fell to Kansas State in the Buffalo Wild Wings Bowl.

This means that, this Saturday night, when Michigan and Notre Dame take the field together for the last time in what could be a very, very long time, the honor of owning college football's best all-time win percentage will be at stake. The Fighting Irish can extend their lead by a smidgen with a victory (ND: 73.34 pct; U-M: 73.21 pct.). The Wolverines can assert that they truly are "The Victors" throughout the history of college football with a win (U-M: 73.29 pct.; ND: 73.26 pct.). Well, at least for the next week.

Their battle for college football's all-time win percentage will not end here. Both Michigan and Notre Dame will continue to go back and forth, trying to outdo the other every week for seasons to come. At some point, one of these two will begin to pull away, gaining a considerable edge over the other. Heck, it may even come in the form of vacated wins if the rumors of Notre Dame's alleged academic cheating scandal are accurate.

But, nonetheless, either Michigan or Notre Dame needs to take that first step towards securing such a lead in this race for college football's best all-time win percentage. And, coincidentally, it just so happens to be that this first step will occur on Saturday night, when Michigan and Notre Dame face off in the last scheduled meeting in what has been an incredible rivalry that should not have been a victim of conference realignment.

Drew Hallett is a staff writer for Maize n Brew. Be sure to follow him on Twitter, @DrewCHallett.