Peeking ahead to Little Brother, and bad news for Indiana against Ohio State.

Share All sharing options for: Thursday Morning Brews: Checking In On Sparty

How Good Is Michigan State?

The #2 team in the country - the penultimate. It's a ranking that carries with it a certain amount of expectation, yet Michigan State hasn't exactly razzled and dazzled to that collegiate perch. In Week 1, there was a 13-point win over Western Michigan. In Week 2, what easily could have been a loss. In Week 3, a two-touchdown game against Air Force. Last week, 30-10 against CMU.

But as much as rankings are supposed to reflect the quality of teams today, certain teams are bolstered by vague instincts like 'reliability' or 'trust.' In truth, nobody knew exactly how Alabama would fare with their secondary, receiving corps, and quarterbacks, but they trusted that Bama would do what Bama always does. Sometimes it works; sometimes it doesn't. Trust is how teams that win consistently stay on top for longer, and now that ephemeral cloud is holding up a Spartans program that has been as reliable as they come since 2010.

There's certainly a case to be made for them, of course. Before Michigan State took on CMU this week, Dantonio told BTN's Rick Pizzo that his team wasn't playing to what it's capable of despite a 4-0 start. And he's completely right. The young running backs are tough and athletic, but they also need to find a symbiosis with the linemen blocking for them. The defense is disruptive, smart, and well-coached, but there are holes to be found in that (green) secondary. Connor Cook is still settling in with his receivers. Two new defensive coordinators are learning to make their mark.

The Spartans might not be the #2 team in the country. The AP top ten is 38-0, after all, and the top twelve is 44-0. Michigan State has a few challenging games ahead, and an unlucky bounce or an injury later, they might be looking at just their second conference loss since the 2012 season. Voters will appeal to the Spartans' combination of potential and talent (oh, and that track record) - but the fact is it's too soon to rank. Dabo Swinney said as much, and more, this week.

But give me a team that knows how to practice, and I'll show you a contender. This was Gary Kubiak this week, praising NFL rookie and Michigan State alum Bennie Fowler: "Just watching Bennie practice, you tell your players how important practice is. Bennie has practiced exceptionally. ... Bennie is making plays on Wednesdays, Thursdays and Fridays, and we gave him a chance on Sunday and he did it again. I think it's Bennie's work. He deserves the credit. It's his work." There's a reason why guys like Kirk Cousins, Le'Veon Bell and Fowler succeed in the NFL, and small resume or no, it's hard to bet against that. So, a #2 ranking it is.

In the meantime, inside the locker rooms in East Lansing, it's simply a work in progress. 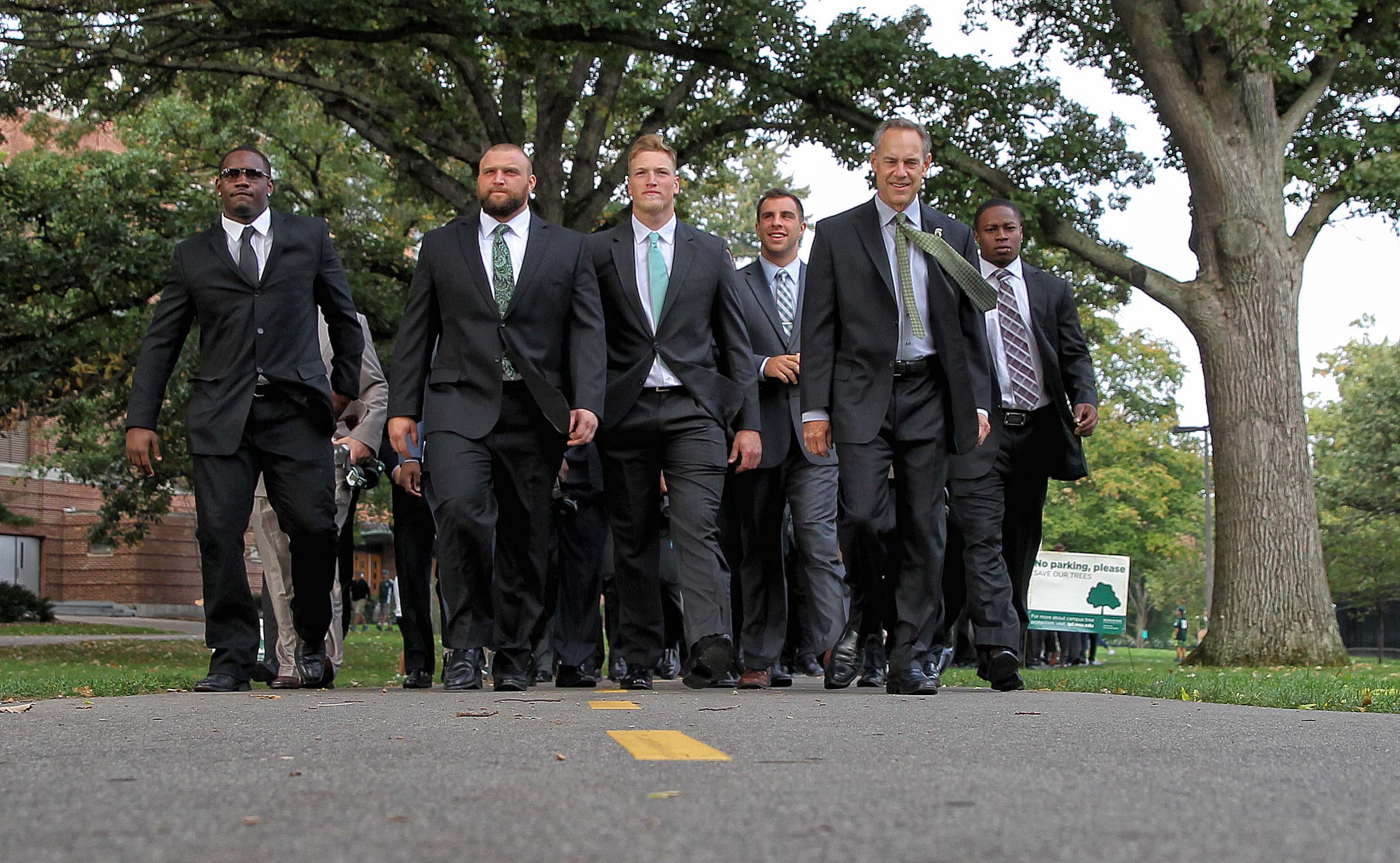 Cardale is still firmly atop the depth chart. Tyquan Lewis, who is starting at WDE, is not the play-maker that Noah Spence or even Steve Miller was, but he's strong in the run game and packs a punch.

No Brady Appeal Hearing Until 2016

This will hurt Indiana's defense, but not critically. Depth is solid on the front line, and Latham is not their best player there. That said, he is a good talent, and Kevin Wilson has been struggling with his locker room.

Maryland players held a no-coaches meeting this week, which could be nothing or something. Regardless, it's been a rough start for the Terps.

Flood is now two games through a three-game suspension for improper contact with a professor, and Rutgers is 1-1 in that time. The team gets a bye this week, before facing Michigan State on October 10th.

Maty Mauk has been suspended for the South Carolina game for a violation of team policy, per a release.

This 56-14 drubbing that Boise State gave to Virginia this week may have put the ice on Mike London, who has consistently been the subject of firing rumors for a couple seasons now. Boise State's defensive line dominated the Cavs at the line, even though Virginia had mostly held Notre Dame in check two weeks before (and Notre Dame's D-line looked great against Georgia Tech). There's no easy way out from here; even if Virginia improves leaps and bounds, their last five games are against GT, Miami, Louisville, Duke, and Virginia Tech.

The Cardinal have looked good up front at times, but the consistency hasn't been quite how they want it. This is where recruiting has paid off: their three leading running backs are all blue-chip talent, and they show it while bailing out the linemen on occasion. This team has been a bit of an enigma, but they're 3-1 with some good wins and a loss to a 4-0 Northwestern unit. They face Arizona this week.

Marshall had 1,000 yards rushing as a sophomore, 1,000 yards receiving as a junior, and currently leads the Pac-12 in kickoff return yards. He was close to entering the NFL last season, but ultimately decided he could improve his game with another year in Eugene.

"I was close to coming out. I had two good seasons in a row.... I definitely considered it, but I thought it would be best to come back."

Best of luck to him.

If you hadn't heard about Ezekiel Elliott losing his dog, well, don't worry. Chase is back home.