Looking Back: Michigan's Incredible Journey To 6-2

Sometimes, you've got to go back to actually move forward.

Share All sharing options for: Looking Back: Michigan's Incredible Journey To 6-2

When the game finally ends, and the victorious coach is interviewed - how did you do it? is usually the first question - the coach will always say something to the effect that he's happy with a win and will definitely be taking the rest of the night off to enjoy it (ignoring whichever next challenge is waiting out there). While it becomes a trite answer eventually, it's also a motto that bears fruit for the ones who actually abide by it. So with this wild ride of a season now past the halfway point, and with a bowl game all but guaranteed, it seemed right to step off for a moment and enjoy the journey it has been. 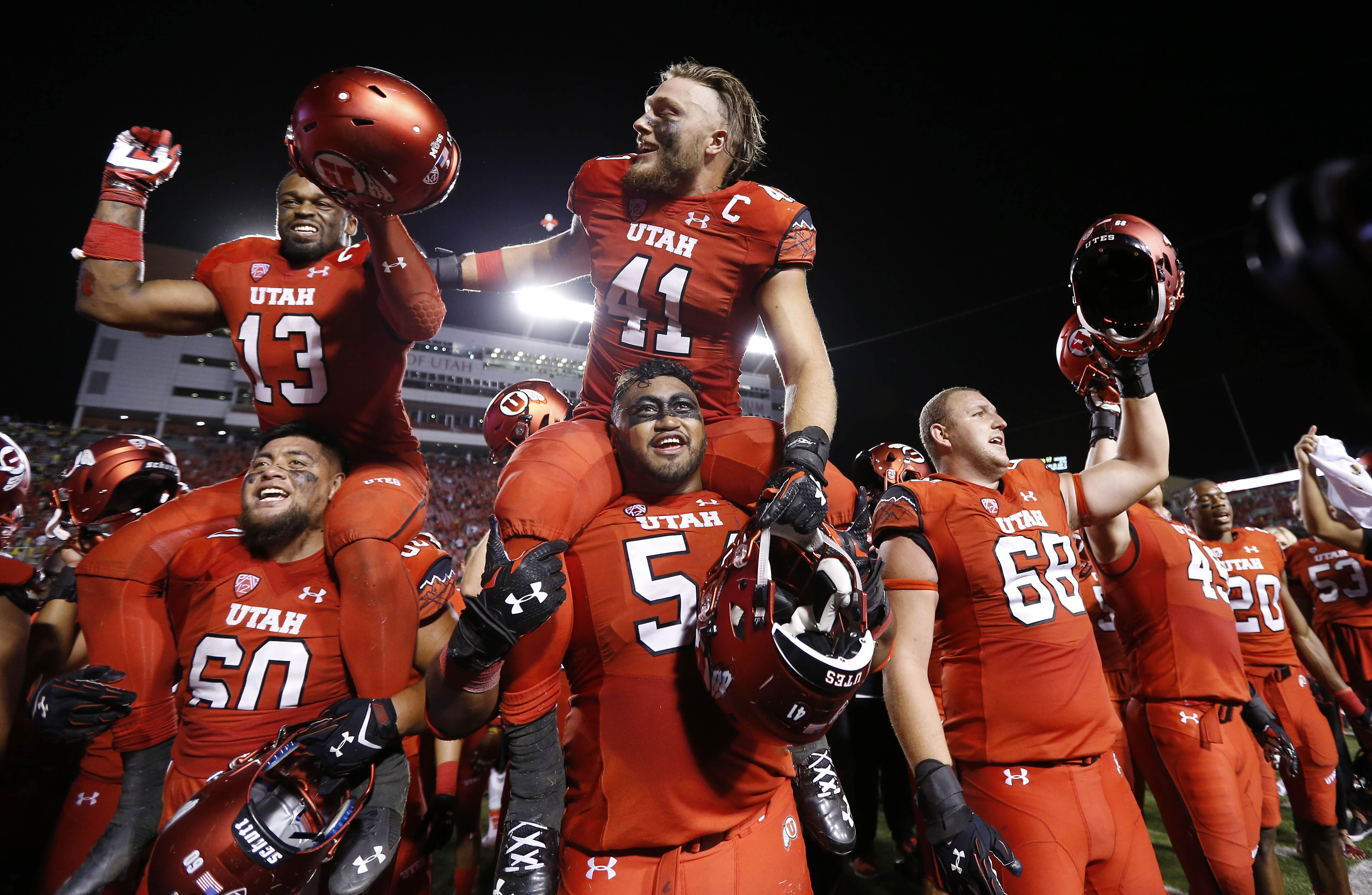 It was Thursday night, the big kickoff of college football, and Michigan fans were beyond elated to see Jim Harbaugh's debut. Who would be starting at quarterback? Who was going to carry the ball? After months of anticipation, it was finally time to ball.

In terms of national TV ratings, the biggest game was South Carolina against North Carolina. But the one with the most impact on the season was definitely Utah-Michigan, a pair of teams that were unranked entering the year but quickly got to work pulverizing their opponents for the next month and a half. Michigan never led in this one, and the final score (a 24-17 Utah win) was closer than the game felt.

And the game felt both exhilarating and deeply disappointing. There was a two-star true freshman (Britain Covey, here catching a pass from Devontae Booker) tearing it up against Jabrill Peppers. There was Jake Rudock throwing three interceptions. Grant Perry was playing a lot, which forced a lot of questions about the state of Michigan's wideouts. Michigan's run game got shut down, too, the linebackers didn't look fast enough, and Travis Wilson, Utah's quarterback, wouldn't be stopped. And yet, it was a close game.

"Offensively, when all eleven were doing exactly what they were supposed to do.... the precision of the unit has to be all 11," Harbaugh said afterward. "The times when we did have breakdowns - one guy, one breakdown, one missed assignment or two on the same play. All of it is fixable and that's what we're working hard to do right now.

"We were good in the red zone. Picked up a good amount of first downs. Sustained drives. .... I also thought our special teams was pretty darn good." 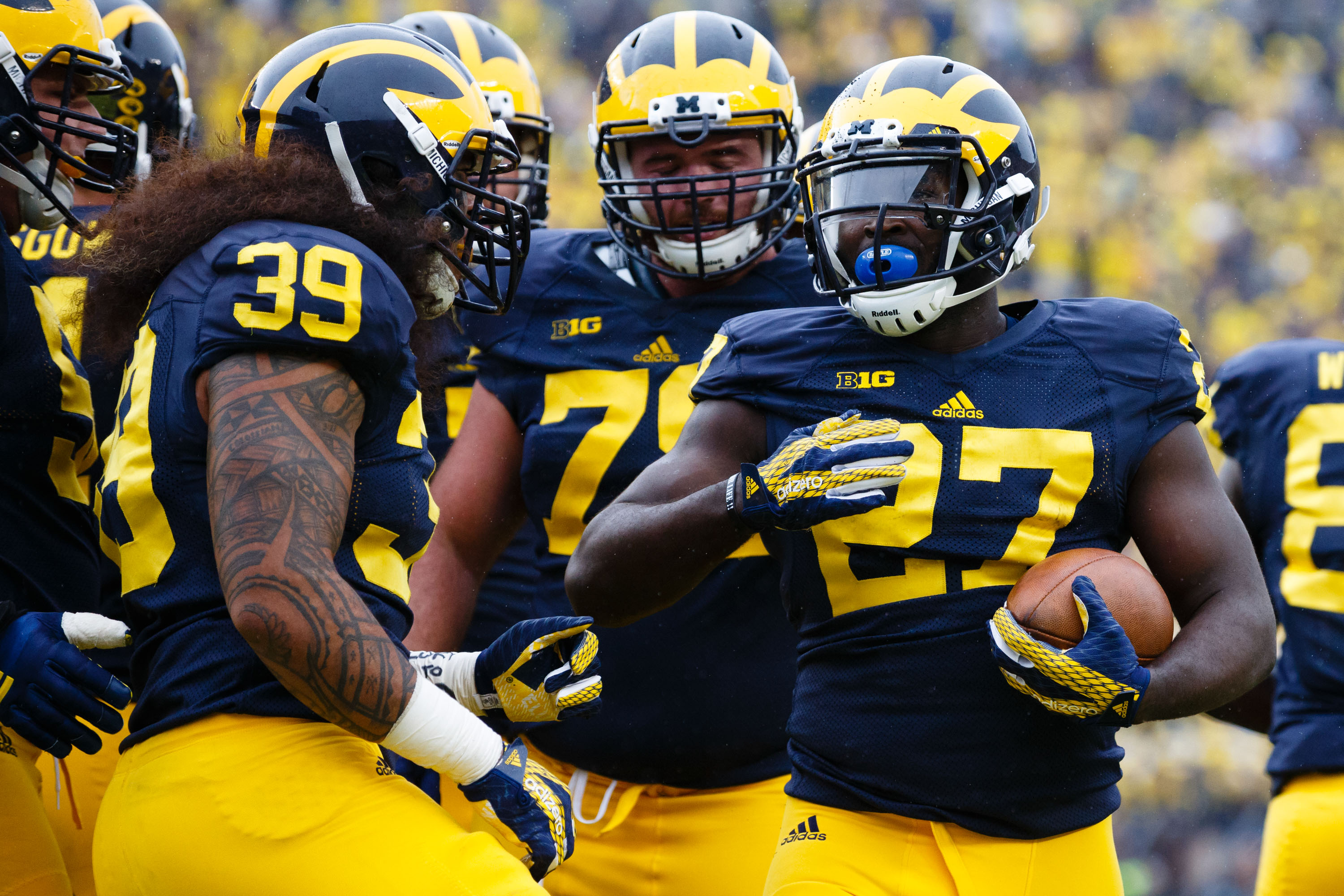 Nine days later, Michigan went at it again. The Oregon State Beavers were the guests this time, and they were met by a downright impassioned Michigan squad. De'Veon took over the game with angry running: "we put a lot of time into this week," he admitted, "and making sure we didn't make the same mistakes we did last week." Jim Harbaugh had his first legendary rant on a punt play in defense of Jeremy Clark. And the defense held Oregon State to 79 pass yards and 59 rush yards.

"Great team win," Harbaugh mused. "I thought this game was won with a week of practice." 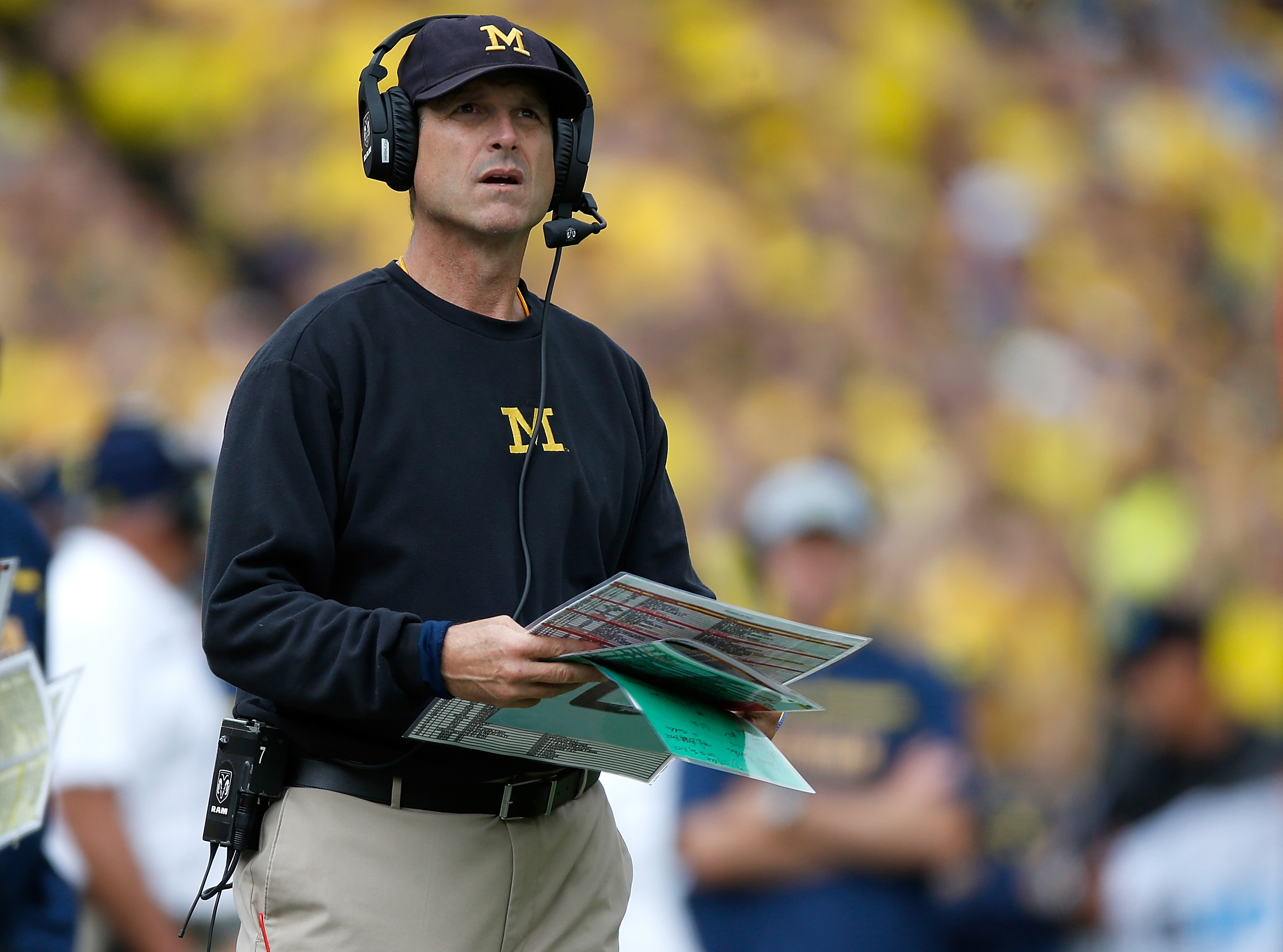 The next week, the UNLV Rebels came to town. Ty Isaac showed us what he could do, so did Jehu, and the defense came close to a shutout with a 28-7 final - the second straight week they allowed only 7 points. Mario Ojemudia was not impressed, however.

"We can't get relaxed when we're ahead," said the senior. "We just have to keep our identity of - hitting everybody in the mouth."

"As a defense, we want to play to our expectations, not to our opponent's. Giving up that touchdown was unacceptable because we were the better team all day and just needed to keep that going and not play down to our competition." 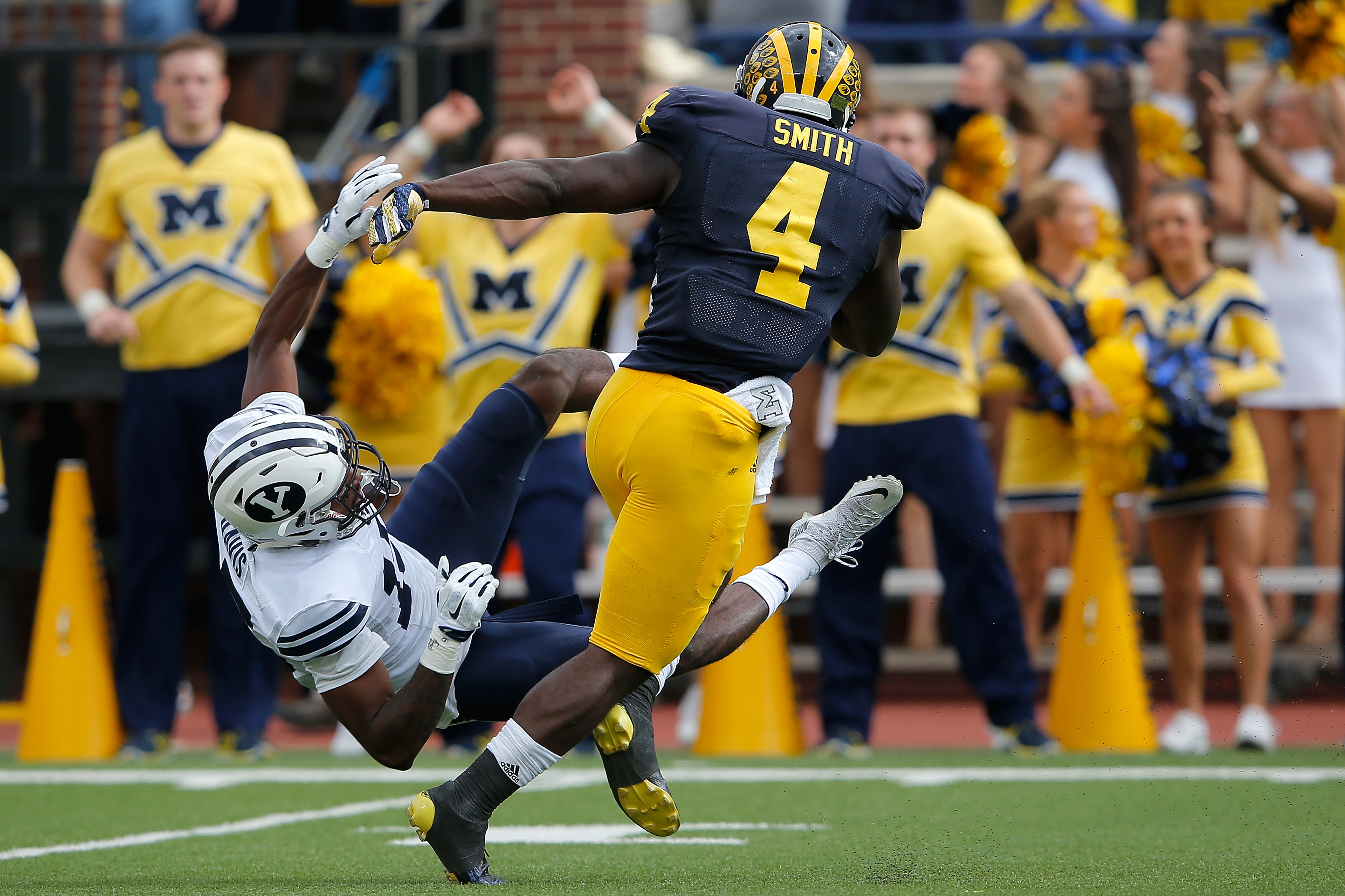 A 31-0 victory over #22 BYU offered Michigan a coming out party, with a "rare win" over a "ranked team" according to the AP coverage of the game. De'Veon Smith notched his second 100-yard game of the season, Amara Darboh did a good Neo impression, and the defense allowed 105 yards to a team that had been averaging 432.3 against Nebraska, Boise State, and UCLA. Rudock finally had a turnover-free game, but there were signs that Michigan had traded one concern for another. After throwing for 279 yards and 3 interceptions in the opener, Rudock had not - and still has not - thrown multiple interceptions or exceeded 200 passing yards in a game since.

"Your thoughts on how the secondary's coming together right now after four games?" Jabrill Peppers got asked.

"You know, it all starts with the coaches. They do a great job of gameplan and coming up with schemes that best fit us and our best attributes and they put us in the right positions to make plays and it's been working so far. It's just all in the schematics." 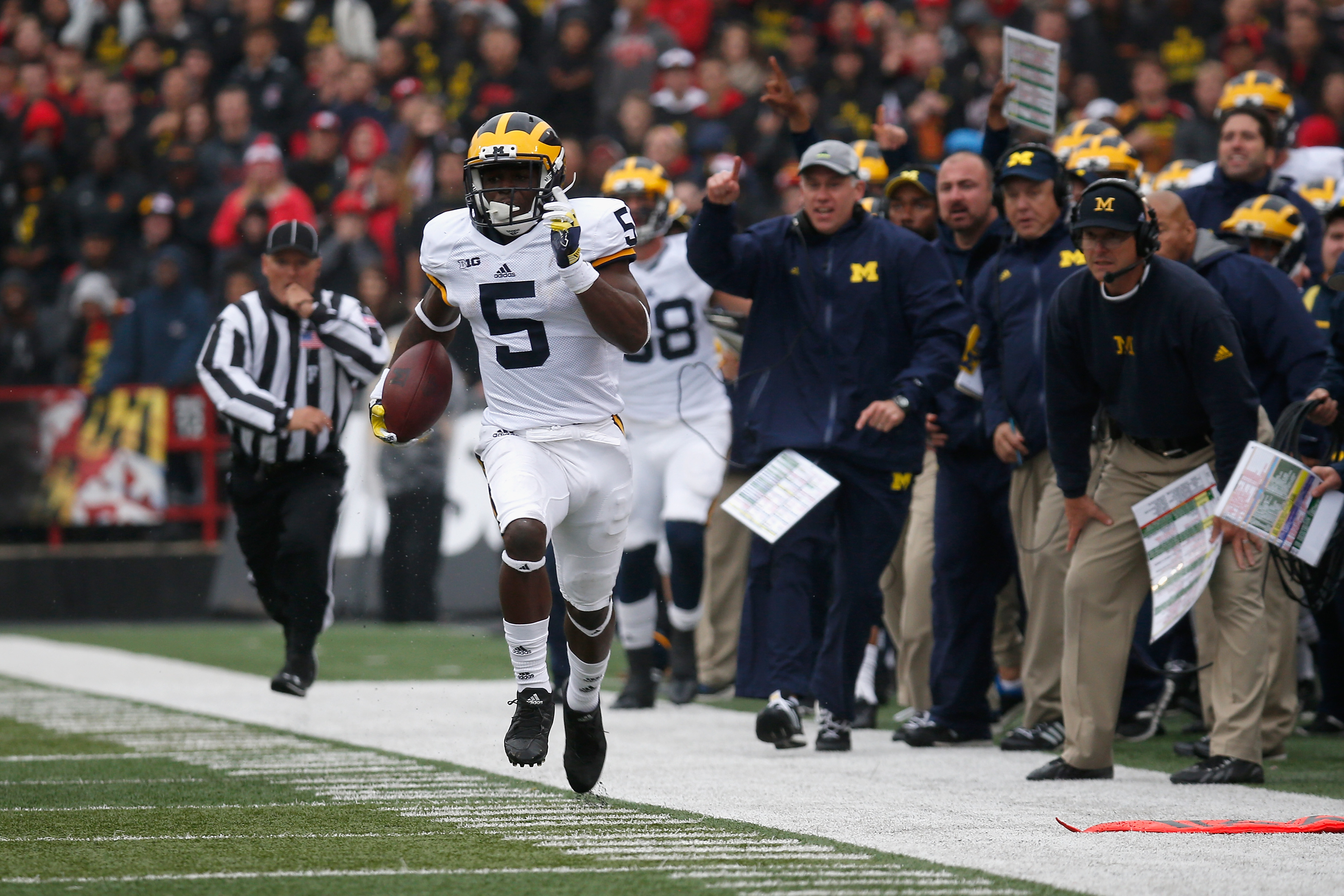 Week 5: Maryland, 2-2 at the time but now mired in a painful losing streak. Michigan was dominant again on defense, something that surely pleased John Harbaugh: another 105 yards allowed, 10/36 passes allowed and three interceptions - the kind of game-changing interceptions that Michigan defenders have been missing lately. Jourdan Lewis caught a fabulous ball over the middle, Desmond Morgan grabbed a deflection close to the line, and Jeremy Clark caught one on a fade route that was simply a poor choice by Caleb Rowe.

Meanwhile, the Wolverine offense had a hard time taking advantage of the opportunities. Jake Rudock turned the ball over twice himself, once on a fumble on 4th and 2 in the 1st quarter, while Ty Isaac put the ball on the ground multiple times as well. The worst news for the Wolverines came early in the fourth, as Mario Ojemudia tore his Achilles.

"Now's the time," was Jim Harbaugh's mantra with reporters, when the topic of Tyree Kinnel was brought up. "We truly believe there are no more freshmen. When they go through a month of training camp and four games, when you've played four games, a third of a season, nobody is a freshman anymore and now's the time.... Right now Tyree Kinnel, Grant Perry, Keith Washington, Reuben Jones are all - Shelton Johnson's also close to being able to do that. Karan Higdon is another."

One of the older players that Jim Harbaugh had a lot of praise for was Ryan Glasgow, calling him "outstanding" with a "high motor all the time." Glasgow, when he had a chance to speak, deferred to his team's overall success.

"I think a lot of it starts in practice. There's a lot of competition. I think we have a two-deep on the D-line that a lot of people would kill to have, and people are trying to take everyone's spot every day and if you don't perform in practice you're not going to play in the game, so everyone's pushing each other and I think the competition really helps that come out."

This game also featured another electric run by Jehu Chesson, and a breakout performance by Drake Johnson. 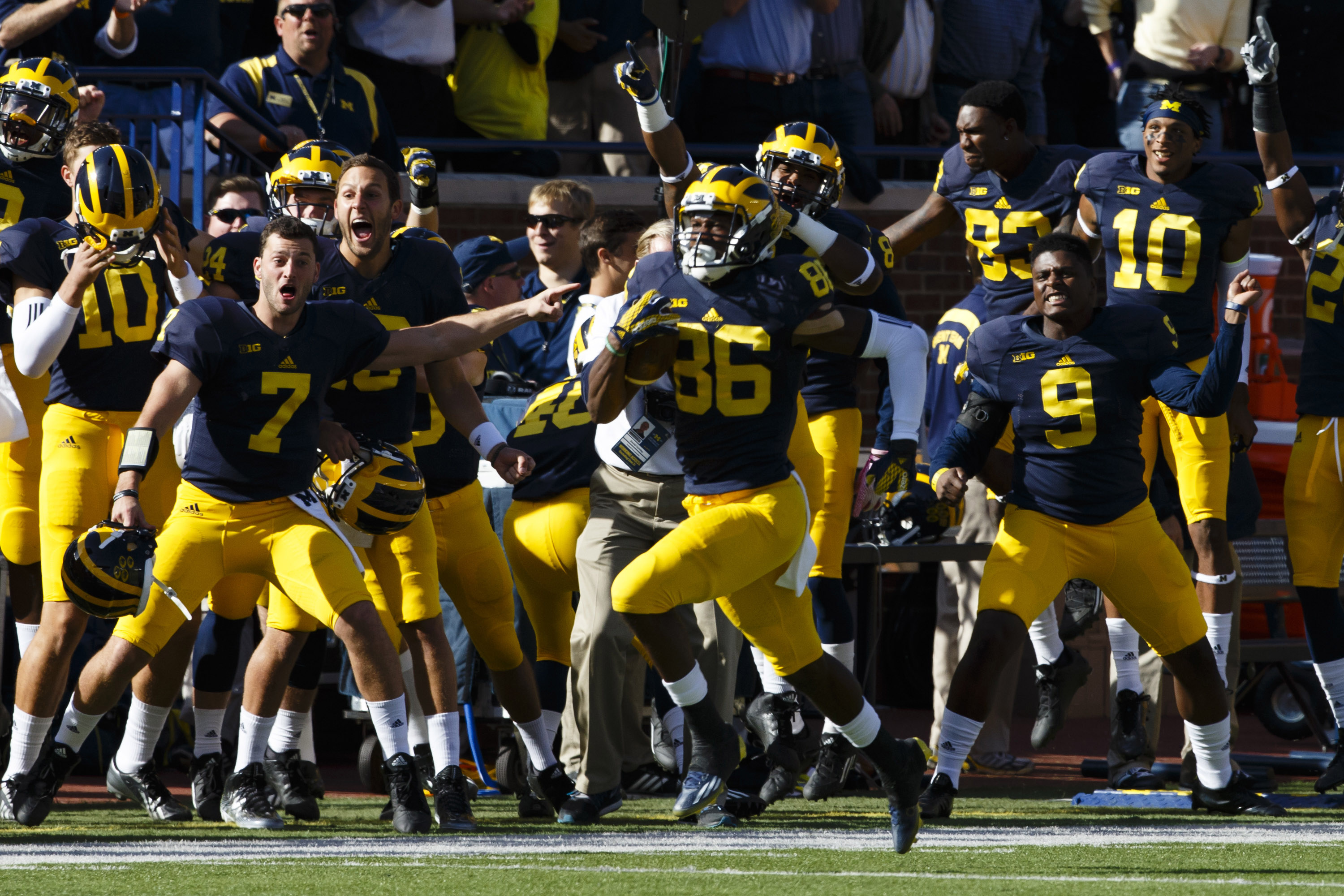 Week 6: Northwestern. Michigan entered this game with 31-0 and 28-0 wins on their resume, and they blew out Pat Fitzgerald's Wildcats to the tune of 38-0 in front of 110,452 people in the Big House. Jehu Chesson showed why you always arrive early to parties, Drake Johnson popped a breath mint, Joe Kerridge helped himself to the candy, and Jourdan Lewis put on a magic show all before the half. The Wolverines took their foot off the gas in the final two quarters.

"We have a lot of talented guys who take pride in what they do," said Jabrill. "This team likes to work," added Jim.

"How would you describe your team's level of confidence, both offense and defense at this juncture?"

"I don't know. I mean, execution fuels emotion [and] it fuels confidence. You'd expect that they would be confident, and they understand that ... with good execution there's good preparation. Probably the thing I'm most excited about with our team; they like that part of it and they like the work. Blue-collar way of doing things. So, we'll be at that again this week."

Then, the gut punch. Week 7. Michigan State. The Big House. Forty-two of the last 45 winners of this game won the rushing battle, and by a margin of 62 to 58, Michigan won the ground game against the Spartans. But it didn't matter in the end, as everybody remembers the final moments.

"You gotta believe, I guess," said the Devil himself. "You know, we kept talking about just being mentally strong and just keep playing. We put eleven men up on that last one and they muffed the punt - and we scooped it. Unbelievable, unbelievable. Great environment, Michigan played a great game, this was a great football game tonight."

Michigan fans will not forget this one for a long, long time, and the fans' passion and anger will be imbued by the sights and sounds of Jalen Watts-Jackson scoring his first touchdown. 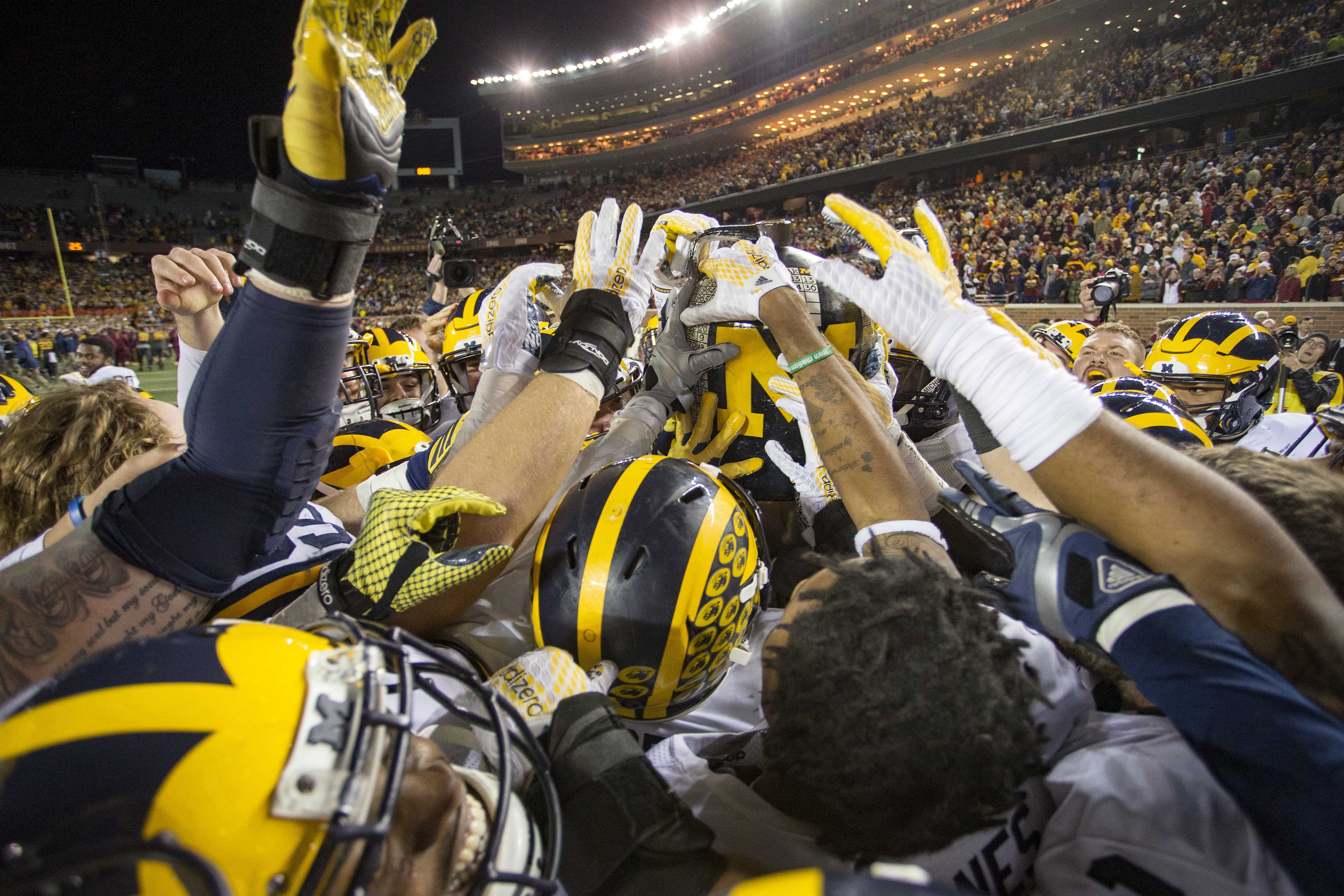 Redemption. Michigan fought hard for four quarters, pulling out an improbable win in the final moments against the Gophers. This was another legendary game, one that was not really defined around any individual performances, but maybe, instead, around the hazy scenes played over and over: Mitch Leidner throwing into our secondary, finding unlikely success. Jake Rudock struggling. Tough yards in the trenches, except for those few times when a Minnesota player broke free into the secondary. Tracy Claeys, looking up at the scoreboard.

So, Michigan makes it out of a tough early-season slate with six victories in hand, six crystallizing statements. From there, the Wolverines play host to Rutgers, travel to Indiana and Penn State, and then head back home to play in the Game. This final month will be challenging, but the first two months gave Michigan a solid foundation to build on. There is already pride, support, and toughness among the players, and the coaches will make sure to have them ready week in and week out. The rest takes care of itself.

What will you remember the most from watching Jake Rudock & Company? What has this season meant to you? And what do expect out of the second half?