What Are The Illini?

Are they the Big Ten's Mr. Nobody? Or will they be somebody?

Share All sharing options for: What Are The Illini?

Perhaps Illinois' problem is its reputation. Or more specifically, its complete lack of a reputation at all.

The team has been very successful; in fact, Illinois claims five national titles, more than Texas, Florida State, or Penn State - and as many as Auburn, Georgia, Miami or Nebraska. They have also had five Rose Bowl MVPs, seven Big Ten Players of the Year, and four Heisman Trophy finalists.

Illinois has also been in the doghouse. In 1997, Illinois lost every one of its games by double digits and got outscored by 250 points. Then, from 2003-06, they went 2-30 in the Big Ten and 8-38 overall. And of course, the wins they managed to get came at the expense of some extremely light-weight competition.

If you were around in the mid-90's, you thought of Illinois as a strong defensive squad, thanks to Lou Tepper. Tepper came to Champaign in 1988 to coordinate John Mackovic's defenses, and he took over the team when Mackovic left for Texas. For about a decade, Illinois built a calling card as a physical, 3-4 defensive team. In 1994 and 1995, two Illinois linebackers won the Dick Butkus Award, given to the nation's best linebacker. It's an award named for a former Illini. But that defensive reputation didn't last, as Ron Turner, then Ron Zook, took over the program.

If you were around in the late 2000's, you thought of Illinois as offensively driven. Rashard Mendenhall had 1,999 yards from scrimmage in 2007. The next year, Juice Williams threw for 3,173 yards and ran for 719 more. (To put that season in perspective, Georgia's Matthew Stafford, USC's Mark Sanchez, and Florida's Tim Tebow all had fewer yards.) Mikel Leshoure ran for 1,697 yards on 6.0 yards a carry in 2010, then Nathan Scheelhaase threw for 3,272 yards in 2013. Yet while all those seasons were amazing, they were also out of the blue when placed next to what those guys did in all their other seasons in Champaign. Consistency? Not quite.

So, what are the Illini? They're 10-2 one year, 5-7 the next, and 1-11 the year after. They're consistent enough to avoid the 'noticeably inconsistent' tag. They don't win too often, but just enough to get by. They're forgettable. They could be great, but never seem to get there. And no one bugs them too much for it.

Perhaps a less difficult question is, what are the Illini in 2015? And yet that, also, is tricky to answer.

The Big Ten, all of a sudden, is undergoing a quarterback renaissance: three potential first-round draft picks, at least, in the 2016 draft. Wes Lunt could add his name to that pile with a strong showing in 2015, and the only thing holding him back is a worrisome injury history.

To borrow a term from baseball, a five-tool quarterback would have the following skills: athleticism, accuracy, the football IQ to be a coach on the field, arm strength, and a leadership quality off the field and during training. According to Illinois' coaches and also based on what's visible on film, Lunt has four of those five, which puts him in rare company. (He lacks athleticism, like most true pocket passers.) Another off-season to improve, an offense designed to put the ball in his hands, and the talent and dedication he has ... all those things point to an outstanding year.

With that said, there are quite a few other factors. He's had problems staying healthy for several consecutive years. The offensive line is porous, and with an ACL injury to Mikey Dudek, he loses one of the few consistent receivers on the team for at least half a season. What we do know is that Wes Lunt can light it up when everything is in his favor; after all, in fourteen career appearances, basically a season's worth of games, he has thrown for 400 yards twice. But not only does the rising junior have personnel obstacles, the Illini would be in very bad shape if Lunt were injured for any stretch of time. And that has happened consistently.

Josh Ferguson is a star, but unfortunately for the Illini, he's also the only proven entity.

There is one other player, though, who's pretty close to a sure thing: true freshman Ke'Shawn 'Red Mamba' Vaughn. Physically, the tools are all there. Vaughn has speed to burn, toughness and size, stop-and-start skills, and takes good angles. We don't know how he'll adjust to college ball, Bill Cubit's offense, or nuances like pass protection that often keep freshmen off the field. But the most likely back-up to Josh Ferguson, especially later in the season, is a true freshman. 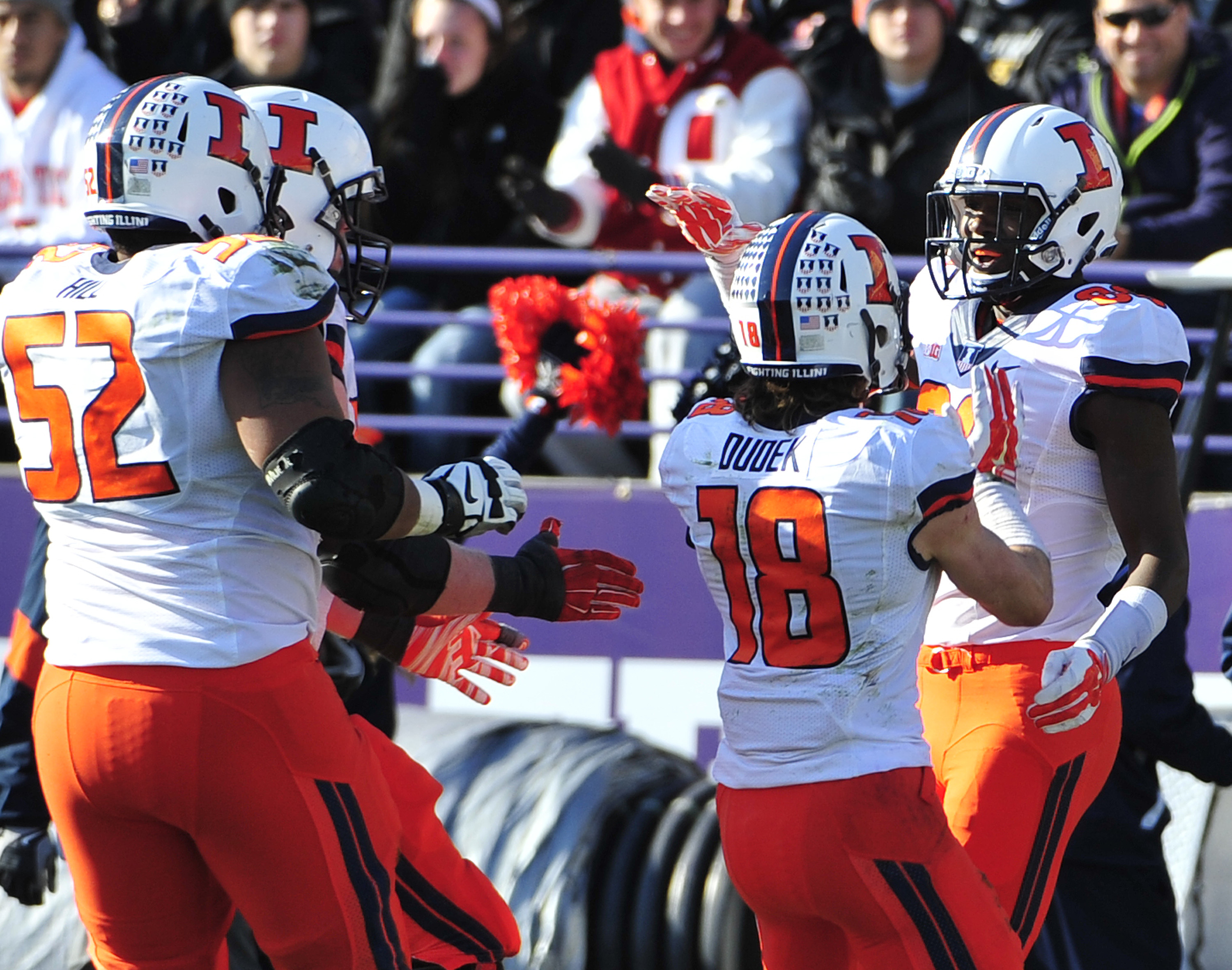 It bears repeating how great Dudek was for Illinois as he ran to freshman All-America honors. Dudek breaks free consistently, making easy reads for his quarterback. When the ball is given to someone else, he blocks with amazing intensity and effort. Basically, he's the Big Ten's Wes Welker. Losing him for half the season almost assures Illinois another loss than it would have gotten.

With that said, there are some options behind him. Between returning players Malik Turner and Geronimo Allison, and true freshman Sam Mays, Illinois has three potentially athletic players who are all around 6'3", 200 pounds. Mays has to adjust to the college level, Allison will have to prove he can be consistent at the FBS level, and Turner simply needs to find another gear, because he doesn't get enough separation against better players. But it's a passable crew of possession receivers, and Lunt has good accuracy to get the ball to them.

Similarly to Northwestern, the state's other Big Ten team, this unit has been pretty ineffective. Simply, they are too slow and not strong enough. The guards and center were more reliable than the tackles, at least when it came to penetration into the backfield, but they also did next to nothing in the road-grading department. With the lack of run blocking inside and a sieve on the edges, this line basically forces an offense to be built on quick throws.

Once again, there is a four-star worth talking about, a local Illinois product in Gabe Megginson. Megginson is strong, and his foot speed is passable for a guard prospect. Unfortunately, Illinois is planning on putting him at left tackle, which is oddly fitting for what this line has been in the past. The talent infusion is always nice, and Megginson offers some road-grading at the position that this team has lacked. Unfortunately, the foot speed is a problem that might crop up more dramatically in college. If Gabe is solid, Tim Beckman is on the hot seat and some of the other tackles underwhelm like they did last year - then he might play, and contribute right away. But on straight rushes, he'll be a liability.

Again, similarly to Northwestern, this defensive line is a little deeper, a little better, and a little more competent than their offensive counterparts. Not by all that much, unfortunately - it was easy enough to move the tackles aside in the run game, and the ends didn't compensate with many negative-yardage plays. But it's clear in the open field that there's a decent combination of size and open-field speed in a lot of these guys, something that helped corral a lot of horizontal plays. If there was a 320-pound nose tackle in the middle, this unit could shore up pretty quickly. If these guys improved their technique, or magically grew longer arms, this unit could shore up pretty quickly. And while hope for any of that is slim (though they have another true freshman, Jamal Milan, who is up to 310), several players have been packing on a respectable amount of weight over the past year.

This line is growing up, and it will likely see more growth under Mike Phair. That would clean up the defense's biggest weakness.

The linebackers grew up in 2014, but the line didn't give them much to work with. Mason Monheim and T.J. Neal are the stars of the show, and both have good instincts and fine athleticism. With how often the Illini will play in nickel, they won't really need a third player to break out. This offers a chance for their three 2014 commits - all of whom are two-stars - to develop some more.

Earnest Thomas III is gone, and really, that's a shame. The guy was a lot of fun to watch, and played a big role in this defense as a hybrid safety-linebacker. Zane Petty leaves as well, which means a pass defense that was a strength last year might not be that again.

They do have some other good players, though. The cornerbacks are very solid, between V'Angelo Bentley, Darius Mosely, and Eaton Spence. They take good angles and know what they're doing. The safeties have a chance to be blissfully anonymous, but I don't see the same level of play-making they had last year. Overall, this unit might be less physical and make more mistakes, but it appears to be a really well-coached part of the team. They've built up two-star players before (see: Zane Petty) to be strong contributors.

There's no denying that Tim Beckman has this team in the right direction, at least as far as the roster goes. But if injuries play a factor, they'll probably play a big one, and Beckman has used up almost all of his good will in Champaign. Regardless, Illinois won't be solving any deeper dilemmas over what their identity is any time soon.