A rough week for some of Michigan's Big Ten East compatriots.

What Now For Penn State?

As the lights came on for the 2015 season, the number '10' was being thrown out by Penn State fans and writers. Could the Nittany Lions win 10 games in the Big Ten East? But by the time their game with Temple came to a merciful end, the number 10 took on a very different meaning.

Luckily for the sake of simplicity, the blame went around pretty evenly for that performance. Left tackle Paris Palmer, a junior college transfer playing in his first D-1 game, allowed two sacks by himself, and it was Palmer's and Brendan Mahon's responsibility to handle Nate Smith on the infamous sack play off a two-man rush. But there were other breakdowns as well, from blitzes up the middle, to pressure off the right side, to play-calling and execution - enough to make a fairly alarming performance somehow even scarier.

As Michigan fans know well, line struggles don't usually get turned around overnight. Granted, Temple's excellent defense was a big part of their success, and it's a big step down to, say, Buffalo - which Penn State hosts next week. But if Penn State is going to make steady, consistent progress going forward, it's probably not going to come from drastic changes in the offensive line - outside of maybe communication, which could fix some of the blitz problems.

Penn State could start making some immediate changes, though, with the quarterback's execution and with play-calling. It's an important fact that Christian Hackenberg is a statue in the pocket; he simply doesn't have the mobility to side-step rushing linemen very effectively. But Hack could throw the ball away when pressure starts coming home, and that would keep his third downs a little more manageable. Learning how to see the field, and remember what he sees, would also help; Christian needs to stop getting frustrated, and instead (continue to) apply himself as a student of the game. His vaunted arm is not consistently producing results because he is not deciphering defenses properly or learning from his mistakes.

Penn State can also help its cause by leaning on a lot of formations with in-line tight ends and 200-pound 'slot' receivers. Against Temple, Penn State used a lot of these formations, but Hackenberg rarely targeted his tight ends out of them. With some more quick out routes and leaking tight ends down the middle, the offense could dictate how it attacks a defense while potentially getting the ball out quickly and keeping extra guys in to handle blitzers (or double-team unruly defensive ends). With a little less pressure and a more conservative, tight end-centered approach to moving the chains, Hackenberg could ultimately help himself avoid the big hits.

And that means a lot more than it seems. Take, for example, one play early in the second quarter that may have swung the game. Hackenberg took a sack off the edge while the tight end, slot, and running back all leaked out to that same side. None of the three picked up the blitzing linebacker, no one even turned to look for a pass, and the result was a four-yard loss. The play after that, Hackenberg missed a streaking DaeSean Hamilton down the left side for a sure touchdown. Penn State would have led 17-0 at that point, but instead, Temple went on to score a touchdown on the very next drive. 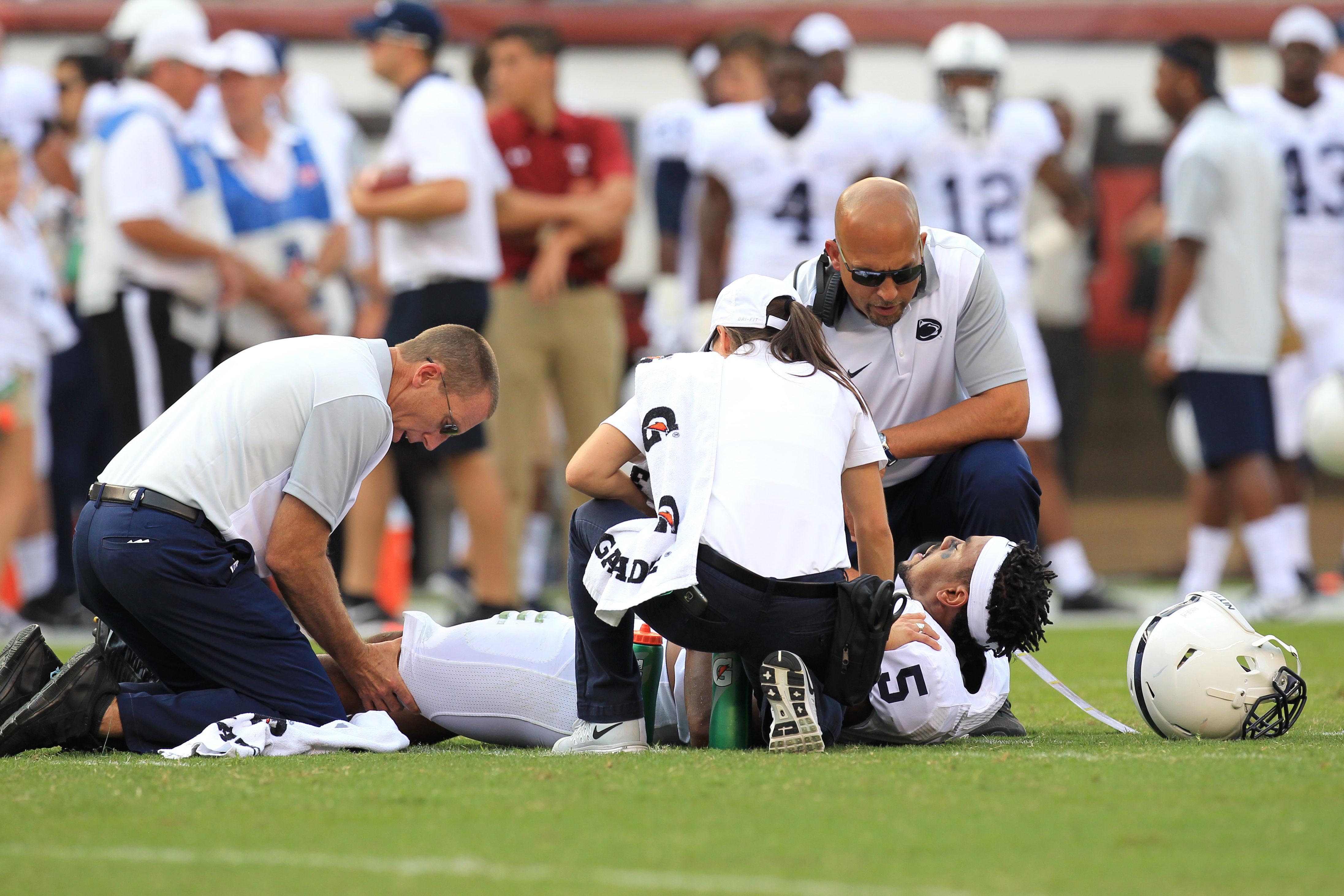 But as much as Penn State's offensive line has seized the conversation, there was another crippling blow to come out of this loss. Nyeem Wartman-White, an athletic specimen and long considered a team leader, was injured in the second quarter on a special teams play and will miss the rest of the season. He was expected to fill the shoes of All-American linebacker Mike Hull, so this is a heavy loss for a Penn State defense that mostly avoided the big injury last year. Penn State would go on to lose Gary Wooten and Brandon Bell for the game as well, so the team ended up turning to two freshmen linebackers in Jake Cooper and Manny Bowen.

The task, now, is pretty simple: the players have to pick themselves and each other up. There are a lot of things to build on, but also many things Penn State did well. The defense showed little to no regression outside of Wartman-White's injury, and Akeel Lynch is a quick, lightning-strike running back who could handle some defensive penetration. Plus, it's important for everybody to not over-react to one game against a good defense early in the season.

Still, the offense has a lot to focus on going forward, and like it or not, the coaching staff and Hackenberg will be judged on how they handle the adversity. After all, pressure - both real and emotional - is not going to go away any time soon, not with the way this offensive line has played, and not with some Penn State fans now predicting an 8-loss season or worse and calling for John Donovan and Herb Hand to be fired. The solutions might be few, but learning how to behave under duress could still salvage a great season for Penn State.

The Task At Hand: Rutgers vs. Norfolk State

The box score may have looked nice and pretty - the Knights forced Norfolk State into -3 rushing yards on 23 attempts, and there were only 124 passing yards given up after one, butt-kicking opening drive. But the supposedly easy result belied an important marker for the Scarlet Knights.

Just days after five players were kicked off the team for participating in a slew of crimes so long it could be an article, the team rallied around Kyle Flood and got back to the business of playing football games. This was the fourth meeting between NSU and Rutgers, and it was the first time that the Spartans (who are an FCS team that went 4-8 last year) managed to score a point on Rutgers. Norfolk State got 13, in fact, and held their own for stretches on the line of scrimmage (including stuffing Rutgers on a 4th and 1). But Rutgers showed a lot more speed than Norfolk State could match, and the offense was a cadre of weapons, from 6'6" Andre Patton and Josh Hicks to possibly the best receiver in the Big Ten, Leonte Carroo. Guys who could strain Big Ten defenses.

But this game was not about the rest of the Big Ten - it was about the steady tackling of the present moment. With so much gone from Rutgers' back four, Kyle Flood put extra DBs on the field and let them build whatever experience they could get. Isaiah Wharton, Jarius Adams, Blessuan Austin, Ronnie James - secondary players who are now key components of this defense - all collected their first collegiate snaps.

"We're just trying to stick together as a team," said Julian Pinnix-Odrick, who started on the DL in favor of the injured Darius Hamilton. "These are times where we need to be strongest as a team. All this family thing that we preach constantly is coming out now. It's not just a gimmick. It's not just something to get recruits. We're really a tight team. You're going to defend your brothers. I'm going to do anything for those guys I'm out there playing with."

Well, go Hawaii. Cardale certainly looked improved from the last time he stepped on a field, but the offense leaned too much on his running. In a way, this was a less creative offense than the one Tom Herman ran a year ago.

Block U Grades The Utes' Performance Against Michigan

Travis Wilson played very, very well under center, and Michigan holding him to 208 passing yards (261 total) was a good sign that the Maize and Blue could hang tough with surgical quarterbacks.

Nebraska, The Morning After

This is a great potpourri of reactions from Nebraska writers, players, and - Gabrielle Union!

That tweet escalated quickly. Luckily for the Huskers, they already have another QB in the fold in Patrick O'Brien. Both are great prospects, but O'Brien is much more of a pro-style prospect for Mike Riley.

Rutgers' Laviano Will Start Over Rettig In Week 2

Both would be fine quarterbacks. Outside of maybe the line, this offense could sustain injuries and still not miss a beat.

It was announced before kickoff that nine players would be suspended; six of those were defensive players, and four of those were experienced play-makers in the front seven. I've said it before, Indiana does not have great depth to handle bumps in the road.

Southern Illinois threw for 411 yards, 24/32 completions, 4 touchdowns and no picks, and the running game produced 248 yards on 5.4 yards a carry. Even more worrisome: only three negative-yardage plays.

Stanford lost some very good players from their front seven, but this was a top-ten defense - both against the run and the pass - last season. Jackson getting 134 yards against the Cardinal means some good things going forward.

A New, Defensive Identity For Northwestern

In a theoretical draft of Big Ten players, Anthony Walker would be one of the soonest defenders off the board, thanks to his physical abilities against blocking linemen and the effortless pass defense. Walker has grown into a terrific, all-around linebacker for the Wildcats.

Turning The Page From Bama

B5Q sits down and talks about Wisconsin's loss to Alabama, and looks ahead to Miami of Ohio.

Indiana's Howard has been as advertised, getting 145 yards and 3 touchdowns on 20 carries for the Hoosiers against Southern Illinois.

(That's NU defensive backs coach, Jerry Brown, who's been with the program since 1992, celebrating with the team.)

Tarean Folston Will Miss The Season

Other injury news: UCLA's Eddie Vanderdoes is out for the year, and star running back James Conner will miss the year for Pitt. Jesse Ertz is likely out for the year for Kansas State. Virginia Tech's Michael Brewer and Arizona's Scooby Wright will miss about a month with a broken collarbone and a knee injury, respectively.

Eastern Washington has some great players in their offense, to Oregon's credit, and Michigan State's Connor Cook showed some inaccuracy this week against Western Michigan (15/31 completions). And the Spartans have some secondary problems of their own. Michigan State is favored, though.

Golson got visibly comfortable as the game went on. Thirteen guys caught passes.