Share All sharing options for: Twenty Things We’ve Learned From 2016

The season does kind of feel over, now, doesn’t it? Yeah, the show must go on, and we’ll all do that in some way or other. There’s an exciting bowl coming up with Florida State. But it’s funny how everything can come to a halt in some way because of, basically, one play.

Anyway, here are some takeaways from what has been an awesome year:

Assistant coaches come and go, but this staff will be fine.

Remember when we lost D.J. Durkin last year? John Baxter, too? And, not only that - in February, it was safeties coach Greg Jackson ditching town to go join the Cowboys. How’d that turn out?

As for Michigan, all those coaching losses didn’t really slow down the Wolverines at all. Michigan’s special teams were more dynamic, their defense was more explosive, and their safeties were able to hand off Jabrill to the linebacking corps and still find a way to make plays. Cocktails all around.

It’s safe to say it: Michigan is back.

Top-five team... only beaten by a point, and then by three in overtime... overall, controlled its destiny and made huge strides over where they were a year ago.

What impressed me most was how this team adjusted to being a top-shelf program, with championship expectations - this is a bit of a psychological point, but knowing what the big stage feels like before you get there is trickier to pull off than it might seem. And the young players who are coming in know what Michigan is now, just two years removed from 5-7. 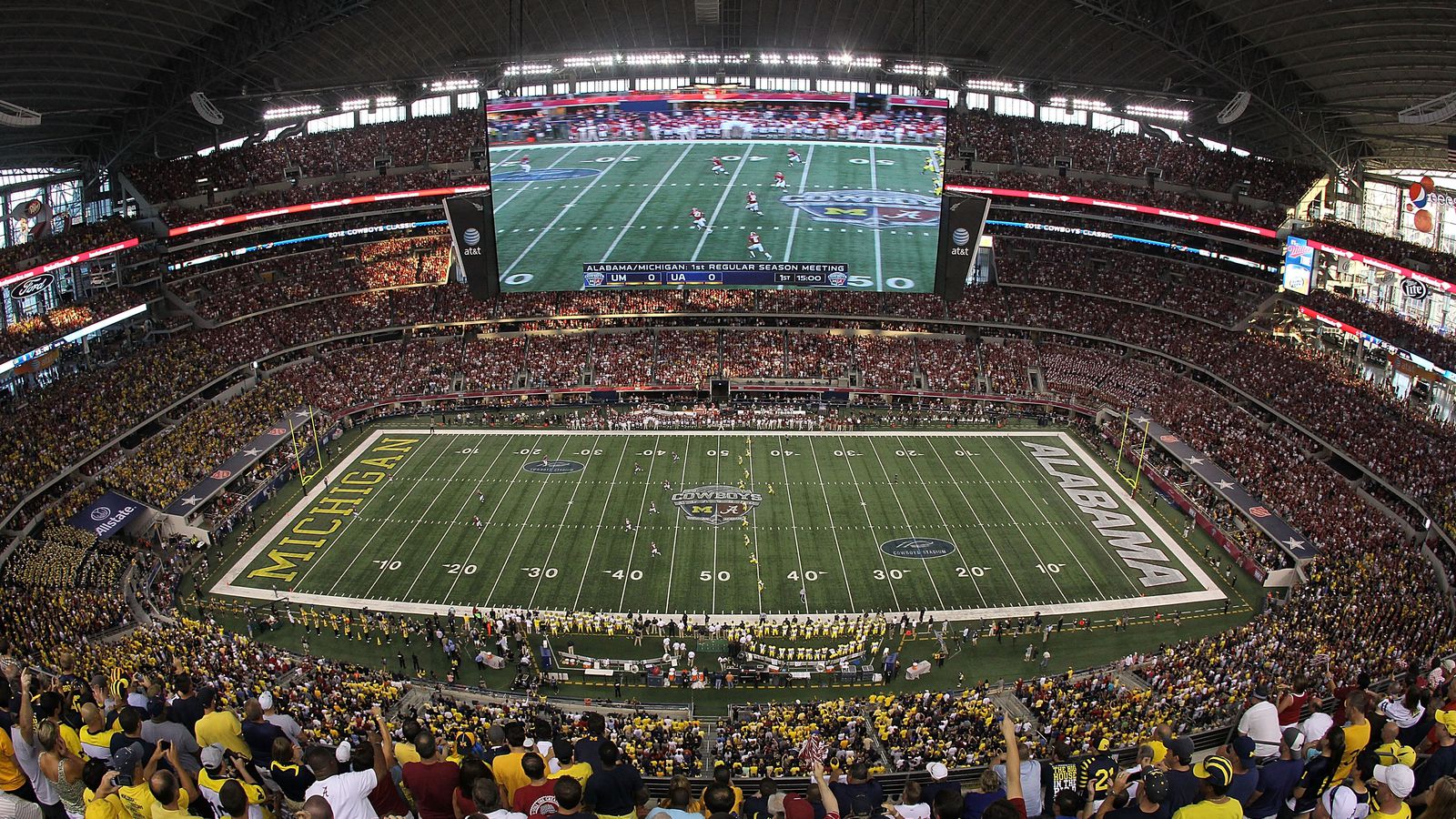 Michigan would have the best shot at beating No. 1 Alabama, according to Vegas

The Vegas sportsbook says the Michigan would be a nine-point underdog against No. 1 Alabama.

At the same time, Michigan can still get better.

Some more focus and mental toughness, especially on offense. Better play-making from a few positions - wide receiver, linebacker, and running back come to mind - and a road-grading offensive line is also needed. Plus, there’s the small matter of replacing 8-10 All-Conference performers. You know what? I’m not worried. We’ll get it done.

I’m over it. Satellite camps are a passion spot of mine, but whatever ends up happening, Harbaugh will make sure the team adjusts and does well regardless. Michigan is already back, and I have a sneaking suspicion Harbaugh will make an occasional appearance in the South (maybe even Texas?) during the summer.

When the going gets tough, Harbaugh likes to shrink his rotation down.

We saw this at times with running back, the defensive line, and wide receiver: in close or difficult games, you tend to know who’s going to be out there for Harbaugh.

Also, he values hard work above all else.

Work develops mental toughness, as well as performing in the clutch. This team’s biggest performers - Wilton Speight, Amara Darboh, Jake Butt, to name a few - were some of the hardest workers and most clutch performers.

But Wilton needed more time to become what this team needed him to be. He’ll now have a full off-season, and some hopefully stiff competition from John O’Korn, Brandon Peters, and Shane Morris.

Never count out a freshman.... or a former three-star.

Chris Evans was the young stud of 2016, despite only making it to campus in July rather than early-enrolling. Karan Higdon was another darling of 2016, and until mid-October he was a fairly overlooked, three-star addition of the 2015 class.

Wilton Speight and John O’Korn - each of them former three-stars - beat out a near-five-star in Shane Morris for all twelve games of the season. Former three-star Matt Godin got his share of starts on the defensive line, and we still didn’t notice him. We did notice Eddie McDoom, however, though to be honest I’m not sure how he was a three-star in the first place.

All the off-season motivation a player needs comes from The Game.

You know what they’re going to be talking about in the locker room? Their legacy, for one. Not peaking early, for another. Getting this Buckeye curse off their backs is #3.

The offense could use a little more toughness.

This was a season to forget for Jehu Chesson, who had more drops than I’m willing to go back and count. The offensive line was strangely erratic as well, and didn’t seem ready or able to lead the team down the field in big moments. Do all the off-season workouts again; hopefully some more of the purpose of it all sticks. Speaking of...

We need some more help on the offensive line.

Still, if you saw anything to do with Michigan’s offensive line the past five years, you’re hoping for an assembly line of All-Americans starting to form here in Ann Arbor with enough depth to challenge Alabama or anybody else unlucky enough to see us in a playoff. To that end, this offensive line class of 2017 will be crucial for future success: guys with natural talent and athleticism, some of whom might challenge right away, will give this team a feeling of completeness.

So, no pressure, Isaiah Wilson.

There’s a lot we can sell to top-end athletes.

Jabrill did a lot of things for this program, but giving Michigan a ready-made recruiting tool for top young athletes around the country, thinking about following in his footsteps, is a great one.

We might even get more creative this time around.

Our defensive ends can benchpress your tackles.

In 2015, Michigan ran a lot of tackle-like players out at strongside end (primarily Chris Wormley and Willie Henry), with the weakside being manned by Mario Ojemudia and then Royce Jenkins-Stone.

In 2016, Michigan doubled down on using size on the outside: Wormley, Taco Charlton, and Rashan Gary took most of the snaps outside, and it worked well. (Chase Winovich, more of a buck linebacker in the mold of Ojemudia or Jenkins-Stone, had a fairly limited number of snaps but made plays as well.) We’ll see what they do in ‘17 now that Taco and Wormley are moving on.

There’s a new generation at cornerback.

Lavert Hill showed a lot of maturity and skill by making the field in 2016, and he may have taken the baton from Jourdan Lewis heading into the off-season. He’ll be competing with an intriguing collection of players: David Long, Brandon Watson, and Keith Washington already on the roster, plus (we hope) a couple true freshmen in Benjamin St-Juste and currently uncommitted target Ambry Thomas. St-Juste and Thomas are both very exciting prospects, and the odds are good they end up in Ann Arbor.

This isn’t your granddad’s Wolverines.

Freshmen playing left and right. Airing it out deep to win games. Enough competitiveness to offend your grandmother, and a head coach showing up in a rap video. Not to mention a southern invasion once a summer.

Get used to hearing the term “33rd NFL team.”

Quietly, Michigan is marching toward a big off-season win - dominating on draft day. That paid big dividends for Ohio State a year ago, and now it’s Michigan’s turn. As Harbaugh showed already, off-season momentum can be a powerful supporting device for player growth and recruiting connections.

Still, for individual players, off-season hype can be hit or miss.

Harbaugh can skimp on scholarships and still get production.

Shifting Khalid Hill, Henry Poggi and Wyatt Shallman (remember him?) over to fullback felt a little like a back-up option, but Harbaugh made it work beautifully. (Hammering Panda, ooh yeah!) Sure, his ultimate goal is to stock every position ten men deep, but he’s been judicious in when and where he puts his schollies.

Let’s hope this bodes well for the safeties, which is next up on the “scraping by ‘til next year” list.

Michigan has all the best names.

We all remember the cantankerous arguing during the Hoke years. Nobody wants to go back to that. It’s been a joy getting back to the good ol’ times instead.