Thought Experiment: What does the 2019 team look like for Michigan?

Hello! In preparation for this article, I bought a very expensive fortune-telling orb complete with complementary back massage, but then its switch jammed and now the thing just vibrates. So we’ll do this blind.

Let’s start off by talking about some general trends and go from there, shall we?

Movement, attrition have been the name of the game under Harbaugh

Remember Wayne Lyons, grad transfer cornerback for the 2015 season (I believe the joke is that he stayed long enough for a cup of coffee)? Kingston Davis, Ahmir Mitchell, or Shelton Johnson, who all came in as Harbaugh recruits but soon transferred out? What about Devin Asiasi, or Keith Washington, who transferred for various reasons?

Then there’s Zach Gentry, former eventual Texas quarterback, or Chase Winovich, once a linebacker and a tight end, or Henry Poggi, originally a defensive lineman who ended up a fullback. Plans are rarely static in Ann Arbor.

The fact is, things move purposefully enough and yet quickly enough for us to forget sometimes just how much change happens over the course of a year, let alone two. By 2019 we might be praising UM’s starting quarterback, Kevin Doyle, or be building on the legacy of our star-studded Vipers now that Khaleke Hudson has won a Nagurski Trophy and Jabrill Peppers had been a Heisman finalist. (And that future Viper? Michael Barrett, of course.)

Sure, you can still spot some trends - in fact, it’s funny how the macro view can be less confusing than the micro one - but one thing for certain is that there will always be a state of flux with Jim Harbaugh at the helm.

In general, though, 2019 could be the year that everything comes together in a perfect mix of experience, talent, and a friendly schedule. Knock on Internet wood.

Michigan’s quarterback situation will be solved, one way or the other

This is really testing the football gods, who are always ready to smite definitive statements and those about whom they are made. But the only way Michigan has to find a new quarterback between 2018 and 2019 is if Shea Patterson does so well he leaves for the NFL - which, while painful, we’ll somehow manage - or if there’s a serious injury of some kind by whoever claims the starting job. (I don’t think Peters jumps to the NFL after next season.) The other possibility is if Shea doesn’t get immediate eligibility from the NCAA, but that seems even more unlikely.

2017 was kind of a bad luck vortex at this position, between Wilton Speight’s regression and John O’Korn being about as helpful as an actual ear of corn, so hopefully we’ve used all that bad voodoo up. Which means we’re in for some fireworks, or stability, or both.

The other good news on this front is that Michigan will have a number of interesting weapons in the receiving game - a fairly veteran crew by that point, possibly led by Tarik Black and DPJ. It may not be the ‘27 Yankees, but there should be some home run hitters, batting average wizards, and maybe someone with a beard and the intensity of Bryce Harper. Should be fun.

Here’s another interesting question for you - how much will the fans see freshmen and sophomores on the field in important roles once Michigan has had a chance to start relying on some veteran Jim Harbaugh-chosen prospects? Will it be a senior-laden show as the ‘15 and ‘16 crew sticks around, or could a few - or some - or even more than some - younger players be able to break through?

The popular bet is that a senior Sean McKeon beats out a sophomore Mustapha Muhammad, and that a junior Jaylen Kelly-Powell beats out a freshman unknown safety. And that could be right - experience is a good thing to have in your corner. But some Jim Harbaugh recruits have surprised us so far with their ability to get on the field quickly and understand the stage and the level of competition, so I think there will be more than a few curveballs somewhere in there.

Michigan will have depth on both sides of the line, probably

Michigan’s offensive and defensive lines are interesting stark points of contrast. One is trying to maintain all their depth while sending a slew of players to the NFL; the other is trying to not freak out about replacing Mason Cole.

In 2015, right after Jim Harbaugh agreed to be the head coach, Frank Clark got drafted by Pete Carroll and Seattle. (He’s since thrived as a playmaker on Seattle’s defense.) In 2016, Willie Henry was taken by the Baltimore Ravens. In 2017, Chris Wormley, Taco Charlton and Ryan Glasgow were also drafted - all in the first four rounds, which made for five such draftees over the course of three seasons.

By 2019, Michigan will have lost Maurice Hurst and Chase Winovich, and probably Rashan Gary as well. The odds are in favor of all of them being drafted in the first four rounds. That means something of a youth movement is in the cards for Michigan’s D-line - led by a former Georgia kid and five-star recruit, Aubrey Solomon. 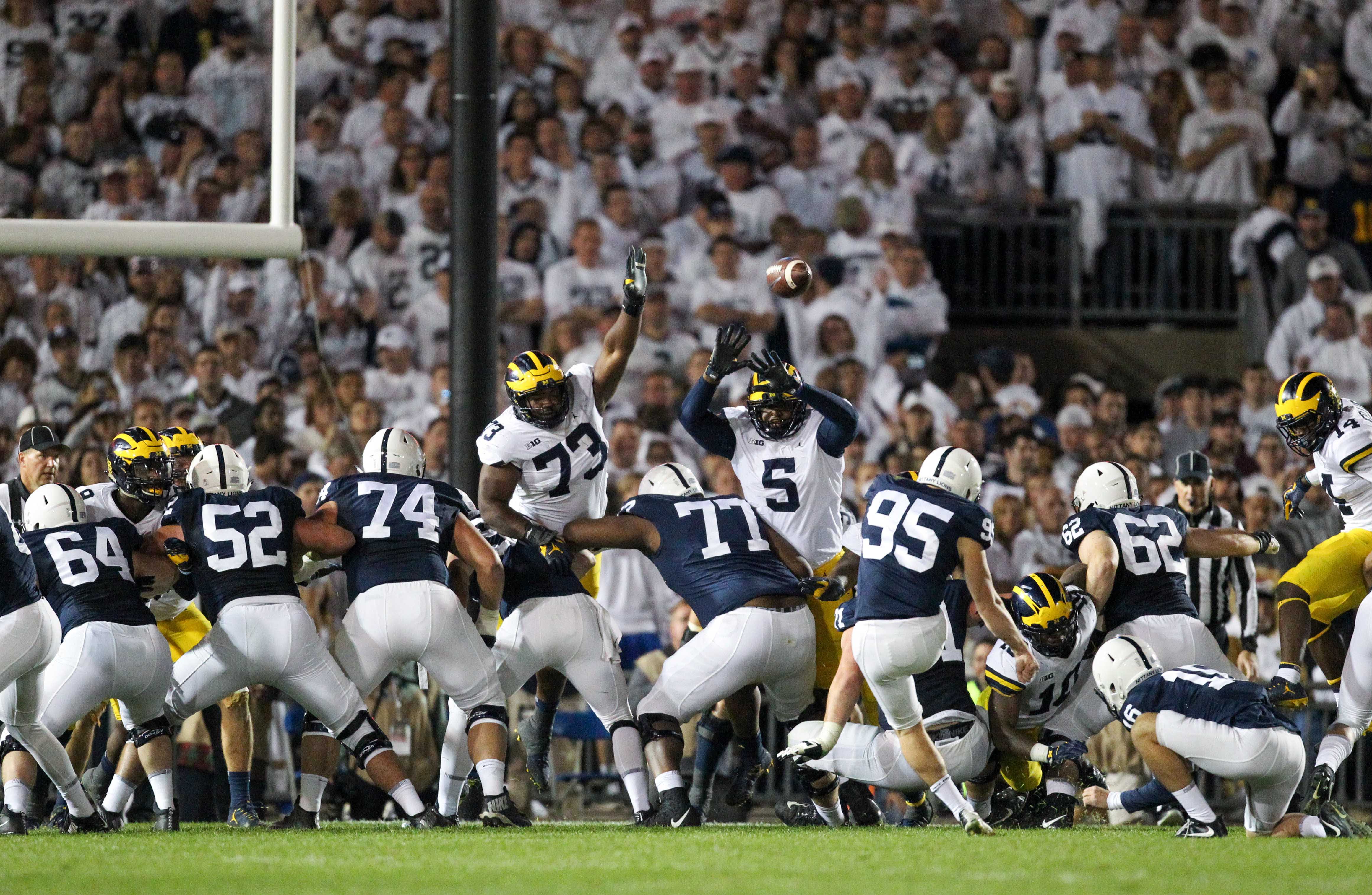 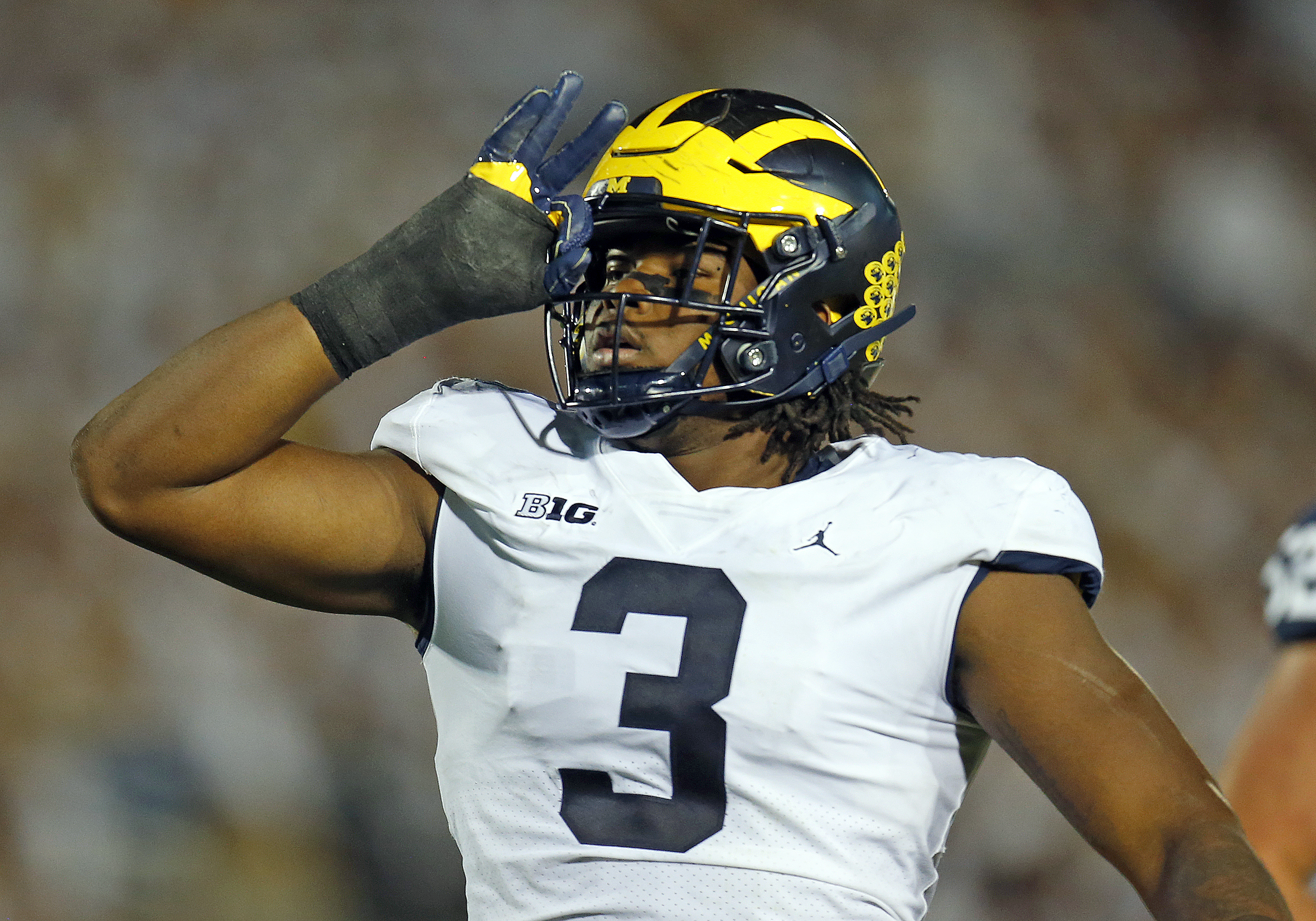 Michigan’s success in 2019 will depend in large part, then, on the combo of Solomon, Michael Dwumfour, Donovan Jeter, Deron Irving-Bey, Phillip Paea, Carlo Kemp, Reuben Jones, Ron Johnson, Carl Myers, Luiji Vilain, Kwity Paye, and whoever else is added with the 2018 and 2019 recruiting classes. The track record is certainly in Michigan’s favor, and there are enough bodies to be optimistic about any depth concerns. In fact, Michigan’s 2019 group might be better than other recent starting units if they play their cards right.

Michigan’s offensive line has been a different story for some time, though. In fact, if I sneak up behind you and whisper “Michigan offensive line depth” in your ear, you might be stuck having nightmares for a full week. Remember Joey Burzynski, who started a game in 2014 at 6’1”, 290 pounds? Like I said, nightmares.

Michigan will hopefully have its tackle position in good shape after 2018.

The good news is that Michigan is going a long way to burnish its offensive line depth - while the bad news is that the tackle positions are still huge question marks, but that should probably be resolved by the ‘19 season. Michigan already has a very solid interior line lined up for 2018, with Ben Bredeson, Cesar Ruiz, Michael Onwenu, Jon Runyan, and a couple good non-scholarship players, Andrew Vastardis and Sean Fitzgerald, providing depth. At tackle, the coaches will look at some combination of Chuck Filiaga (who has enough size to move inside but the feet to succeed outside), Andrew Stueber, Stephen Spanellis (who dropped 28 pounds after coming in at 335), Joel Honigford, and James Hudson. (Freshman Ja’Raymond Hall seems to be in the process of transferring out.)

We’ll see what all this amounts to in 2018; hopefully, by 2019, there will be more depth and some of the familiar faces will be maturing into great players.

An article like this wouldn’t be complete without something that can be used to make fun of me in three years. So here are a few predictions for the 2019 season.

Agree? Disagree? Share your thoughts about this little thought experiment below.