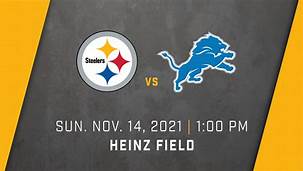 Hello all and that includes Erick All, amirite? Anyway, that photo above is kinda blah compared to all of the cool images I have been finding for previous matchups because a Steeler isn't an animal, it's a person who forges steel, I suppose.

So it turns out that Big Ben has Covid and will not play in this game, he's been a shell of himself so I'm not so sure if this is good or bad for the Lions, being a long time fan and the Lions being the SOL squad that we know them to be, I have a feeling Big Ben not playing won't matter much at all.....as usual. Chase Claypool won't play either so that kind of helps, he's a stud and missing him will impact the game IMO.

Here are the In-Actives for the Game: