MnB Was There: Final Four Weekend in Atlanta Recap

I was there and it was awesome.

Share All sharing options for: MnB Was There: Final Four Weekend in Atlanta Recap

I was there, and it was awesome.

I saw Trey and Tim and Mitch and Nik and Spike and Glenn and Jordan and Jon and Caris end a run no one saw coming but everyone thought they could pull off. I saw 75,000 people pack themselves into a football stadium to squint down at a raised basketball floor. I hugged Caris LeVert's aunt. I did not have subs, but it was crazy anyway. Thanks to Scott at SB Nation and the crew for taking care of me.

Most of the weekend passed in a haze. I can't explain it other than "I can't believe I was watching my team in the Final Four" haze. I got to Saturday's games without tickets, and the secondary market was completely shot - that is, I couldn't even find scalpers selling. We saw one guy who wanted $900 for Saturday's games, which was absurd. We wandered around the stadium area for four hours, trying to suss out some scalpers - nothing. Then a guy got us into the stadium and we sat in the nosebleeds and snuck down to the 100 level and hung out with some really sad Wichita State fans. 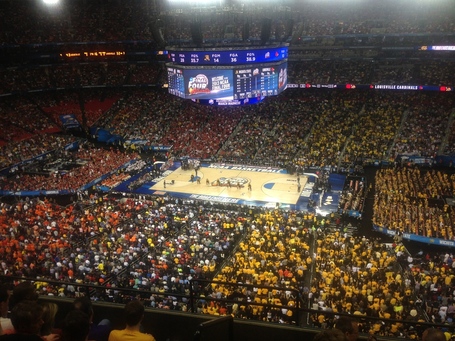 Michigan started against Syracuse in a back-and-forth affair that featured Trey Burke and Michael Carter-Williams canceling each other out. MCW is 6-6 and absurdly lanky, and Trey Burke is Trey Burke. To Burke's credit, he didn't force up many bad shots - and he made the only one I was shaking my head at, a deep three, for his only FG of the evening. I don't think anyone really stood out from my spot in the stands, but Mitch McGary was quick and nimble and agile and exciting to watch. I saw Otto Porter pick apart the 'Cuse zone a few weeks ago, and McGary did the same thing without the deep shooting threat. Really impressive stuff. Then James Southerland went ham with a monster dunk and a few minutes later hit a 3, and the 'Cuse fans in the stadium were going insane.

Then Jordan Morgan set his feet and got run over and some guy who replaced Carter-Williams took a bad shot and ahhhhh Morgan dunk Michigan wins ecstasy confusion oh my gosh the ticket and hotel and all of it were so totally worth it where am I my dad is high-fiving some random Wichita fans who just hated the 'Cuse fans who were offering $50 for 100-level seats. 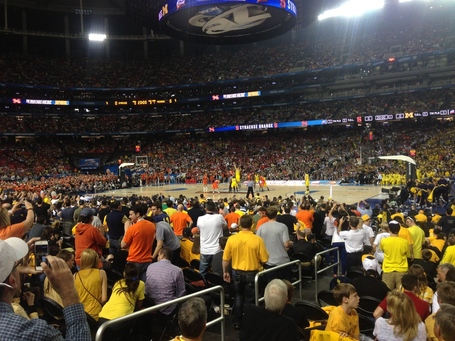 Sunday was a blur. I think I went to a Braves game, scalped nosebleeds, and sat right behind third base with some bitter Cubs fans. For a fan base besotted with existential sodomy, I'm pretty impressed with how Cubs fans travel. Good for them - they outcheered Braves fans on Opening Weekend on a beautiful Sunday day game.

Sunday night I started getting nervous because Michigan was playing for a national championship 24 hours later and I still couldn't process it. Monday was a blur as well, until we arrived at the Georgia Dome four hours before tipoff and saw at least a hundred thousand people in two blocks of park space. The atmosphere was electric and it took a half-hour to get a beer anywhere. Once again, everyone was buying and no one was selling - every fan who would respond to me said they wouldn't sell their tickets for anything. Neither would I.

I remember thinking that I didn't want a close game because my nerves couldn't handle it. Michigan obliged me early, even after the oh-shit-Trey-has-two panic with ten minutes left in the first half. Then Spike Albrecht lost his last name. Here's a shot of the ridiculousness that was the scoreboard before Hancock went off: 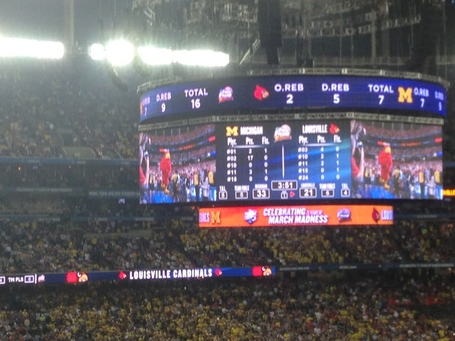 Spike went on one of those NBA Jam runs where he literally couldn't miss. Threes, layups, and I'm pretty sure a post move against - maybe the right word here is "under" - Gorgui Deng - the only thing he missed was the front end of a two-shot foul. Michigan was up twelve and all was good.

Louisville is the best team in college basketball because they can absolutely throttle teams. Their defense isn't spectacularly good but gets a turnover once in a while - and if Peyton Siva and Russ Smith slash, they open up the floor for their 3-point shooters. As a result, Louisville can score in spurts, and that they did. What was a 12-point lead evaporated in about two minutes, and Glenn Robinson's free throws ensured Michigan clung to a one-point halftime lead in what was probably the best half of basketball I've watched in a long time.

The second half was a slow but steady progression toward a Louisville championship. Michigan hung close for most of the half, but Luke Hancock and the Cardinals were not to be denied. With about seventeen minutes left it was clear Trey Burke wasn't going away, and he was going to play his heart out for the (probably) last seventeen minutes of his collegiate career.

It was a pleasure to watch. Burke did almost everything right after a miserable Syracuse outing, scoring seemingly at will. For the first time in forever, Burke had more turnovers (4) than assists (3), but it's clear the man has completely transcended college basketball. He wasn't his best last night - if he was, Michigan probably wins. That said, I can't believe I'm saying this, but I'd almost be disappointed if he came back. It's not like the situation with Taylor Lewan - Burke should just be done. He got beat up hard last night, he's given everything he has, and while I'd welcome the best player in college basketball back, it doesn't help him in the least. He deserves the NBA now - and while that's hard to write, Burke should follow his own path now. I'm happy for him, and I'm happy for all the Michigan basketball Wolverines, because they just had one hell of a ride. 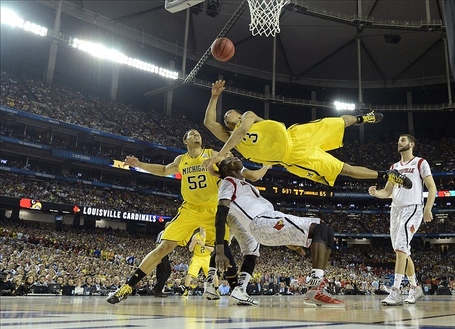 yes I did not take this one - photo credit: Bob Donnan, USA Today

These kids, these men, played to their potential this March and April, and for that I'm proud. When Trey Burke decides to go pro, good for him - there's nothing left for him to do. If Glenn or Mitch or Tim decide to make (probably premature) the leap to the league, I'll probably buy their jerseys, too, and wish them well.

Thank you, senior class of 2013, thank you, freshmen from Indiana and Northfield Mount Hermon and sons of NBA legends, and thank you to all that stayed. Thank you, Michigan.

It's great to be a Michigan Wolverine. And it always will be.