The State of the Program: Michigan Football

The University of Michigan's football program has seen its stock rise in the past two years. Where does Michigan stand on the national scene right now, and how long will it be until it can reach the pinnacle?

Share All sharing options for: The State of the Program: Michigan Football

The first game of Michigan football I can legitimately remember watching is the 1998 Rose Bowl against Washington State. There are bits and pieces of earlier games in my head - I'll always remember my father screaming at the television during the 1995 Ohio State game - but the 1998 Rose Bowl sticks out as my first memorable Michigan game. I was born in early 1991, so that Rose Bowl remains the one and only chance I've had to see the Wolverines fight for it all. To say that I want to see them in the national championship game would be the understatement of the century.

How long until that happens? That depends on where Michigan is right now. Different college football analysts will give you different recipes for championship teams, but most of them will agree on three key attributes of a title team: high-level coaching from the head coach and his assistants, top-15 recruiting classes that fill a roster from top to bottom, and at least one major team strength. The team strength can be anything from an elite running game to a bruising defensive front seven, but the team must have something it can rely on when it finds itself in a tough position.

Each attribute of a title team leads to the next. Great coaches often recruit great players, and a combination of the two leads to elite results on the field. Poor coaches can recruit well while producing mediocre results. See: Notre Dame under Charlie Weis. Solid coaches who recruit at a mediocre level often produce teams that are a handful of players away from being a true title contender. See: Bill Snyder and Kansas State in 2012. A combination of the three attributes doesn't guarantee a national title, but most of the teams with them will play in at least one title game. Pete Carrol and Nick Saban can attest to this.

So, where does Michigan stand in these three areas? In short: Michigan's stock is rising, but it still has extensive work to do. A closer look reveals that Michigan is at least one year removed from being a favorite on the national scene.

Michigan's assistants are strong, but Brady Hoke has a proven track record of his own. Ball State, that Ball State, was one win away from going to a BCS bowl under the man. He would leave Ball State for a middling San Diego State program, only to go 9-4 in his second year with his program. If he ran a sexy new-era offense his name would carry nearly as much weight as the Brian Kellys and Urban Meyers of the world, who also turned poor programs into conference contenders. Hoke doesn't have ridiculous outbursts toward his players on the sidelines, and he isn't a lying SEC lowlife. He's honest, talented and genuinely passionate about the school he works for. His passion is much of the reason why he's going to be so successful in Ann Arbor. 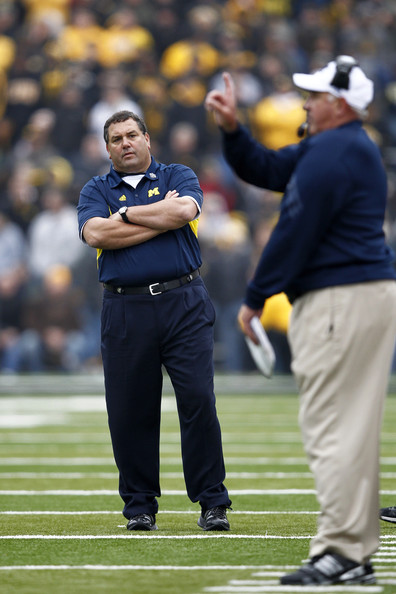 He also knows how to build a winning coaching staff. When Hoke came to Ann Arbor he brought a capable offensive coordinator and assistants that have proven to be more effective than those under Rich Rodriguez. He then picked up the phone and convinced the defensive coordinator of the Baltimore Ravens to pack up and head northwest, causing Wolverines across the nation to rejoice. Say the name Greg Mattison. Greg Mattison. Yea, Michigan's defense is in good hands.

The staff is also stable. Zach chimes in on the matter in one of his latest pieces:

Michigan right now sits as one of just five programs primed to keep the same staff for three straight years going into the still a ways off 2013 season. This was the same staff that Brady Hoke put together upon his arrival at Michigan, and things have worked out just about as well as anyone could have asked for.

The defensive staff has been pretty much the greatest thing ever, turning Michigan's oft-maligned unit into one of the better defenses in the country under the guidance of Greg Mattison. The offensive staff has had its ups and downs, but given the state of the offensive depth chart, hiccups are somewhat expected.

The overall takeaway here is that Michigan's staff is strong. Hoke is a man of his word who disciplines players the way it should be done, and he just so happened to turn two bottom feeders into winners. Al Borges has his critics (including myself), but we all need to take a step back and realize that he was coaching far out of his comfort zone the past two years. His game plan in the Outback Bowl was superb, so we know that he's capable when given time and a non-option quarterback. Greg Mattison has coached two defenses with major deficiencies that still managed to perform at high levels, strengthening his already sterling resumé.

This staff is capable of winning a national championship.

Winning national championships without top recruiting classes is possible. Probable? No. Take a look at the last ten national title winners and try to convince me otherwise.

Many Wolverine faithful were skeptical of this staff's ability to recruit in the early goings. Would Hoke really be able to walk into a recruit's home and sell Michigan against the likes of Ohio State, Alabama, USC and others? We all knew Mattison could, but the rest of the staff had something to prove.

It's now safe to say that this staff can recruit at a high level, just underneath the Nick Sabans and Lane Kiffins of the world. What could have been a star-studded 2011 class ended up being fairly mediocre thanks to the firing of Rich Rodriguez, but the staff quickly stepped in to hold the class together.

Then 2012 happened. Michigan secured mammoth offensive tackle Ben Braden before going on an absolute raid of the Midwest. Royce Jenkins-Stone, Devin Funchess, Joe Bolden, James Ross and Terry Richardson all turned down offers from more stable programs to get a chance to play under Hoke and his staff, and the faith of the Michigan fan base was acquired. Then Erik Magnuson, Kyle Kalis, Amara Darboh, and Ondre Pipkins chose the Wolverines, leaving only severe skeptics to question the staff's ability to pull in elite talent.

Was this all due to the instability of Ohio State? Maybe just young players naively believing in a rejuvenated Michigan program? The 2013 class washed these questions away with a wave of commitments that surpassed even the 2012 class's legendary string of commitments. Shane Morris quickly jumped on board early on in the process, and then Buckeye target Dymonte Thomas decided to end it early and go blue as well. He would receive his Buckeye offer later in the cycle and promptly say "no thank you." Jourdan Lewis, Patrick Kugler, Mike McCray, Henry Poggi, David Dawson and a host of other highly-touted recruits have said yes since, making this one of the best classes in the history of the program. 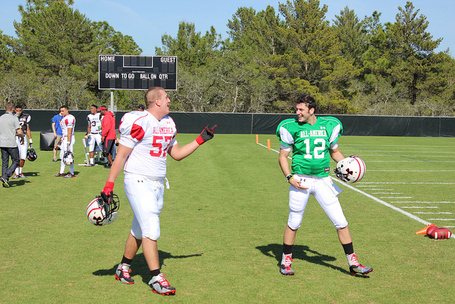 Will the staff maintain this level of success? I think they consistently finish in the back end of the top ten classes, as long as Greg Mattison remains a part of the staff. Ohio State has already shown improvement in the 2014 class by quickly securing star athlete Damon Webb, but that doesn't mean that Michigan can't take its share of recruits from the Buckeye state. Urban Meyer isn't nearly as concerned about protecting Ohio as Jim Tressel was, which allows Michigan to recruit alongside OSU while Urban tries his luck in the South. Notre Dame could also be trouble, but there will be countless recruiting battles between Michigan and Ohio State in the coming years.

According to Scout and Rivals, Michigan's average class ranking in 2012 and 2013 has been between fourth and fifth overall (assuming the current rankings hold). That number should drop off to the 7-10 range in the next few years, but Michigan will still have an elite roster assembled by 2015.

There are definitely deficiencies that need to be addressed, but we'll cover that at the end of the article and in upcoming roster breakdowns.

Michigan has no true truly elite team strength heading into the 2013 season. The running game will still need ample time to develop, the defense will still be young and shallow at key spots, and there isn't a player capable of pulling a Cam Newton in a Michigan uniform.

Predicting Michigan's future strengths shouldn't be that hard. Take a look at the last two classes and the number of talented offensive lineman jumps off of the page. Add in backs like Derrick Green (knock on wood) and Deveon Smith and you're looking at a daunting ground game. Michigan's running game should surpass the Wisconsins of the world before nestling in between the Stanfords and Alabamas. Running like Alabama is possible.

Playing defense like Alabama might not be. Greg Mattison is a magician, but even he won't be able to produce a defense that rivals the likes of Alabama without more talent on the back end. Michigan has recruited linebacker extremely well, and the defensive line should have enough talent as well. Safety could be a concern if one or two players don't pan out, and there's no question that corner won't be talented enough. The lack of pass-rushing linebackers and ends is concerning. In short: the defensive front seven will be a strength, but the secondary could still turn out to be the good-not-great type of secondary.

This program's stock is up, and it will continue to rise until it levels off around 2015. The staff is stable, talented and entrenched as a recruiting force in the Midwest. Recruiting will fill enough gaps to contend for the Big Ten Championship on a consistent basis while creating enough teams strengths to go even further.

Two years come to mind when thinking about Michigan playing for it all: 2014 and 2015. The 2013 team is going to need another year to mature on defense, but by the time 2014 rolls around the offense will have a senior quarterback and a solid running game to compliment a dominant defense. Ohio State will also be rolling and defeating legitimate opponents by then, making that game more crucial than it has been in recent years.

Look out for Michigan in 2015. Shane Morris will be a redshirt sophomore playing behind an offensive line that will certainly be one of the best in the game. The defense will be deep and talented up front, and the back four will be good enough to make the entire defensive unit one of the best on the national scale. Michigan's chances in 2015 sit squarely on two things: Shane Morris and the development of skill talent around him. If the staff manages to pick up a true number one receiver it's going to have a monster of a team.

You'll have to wait for the roster breakdowns if you're looking for more complaining from me.